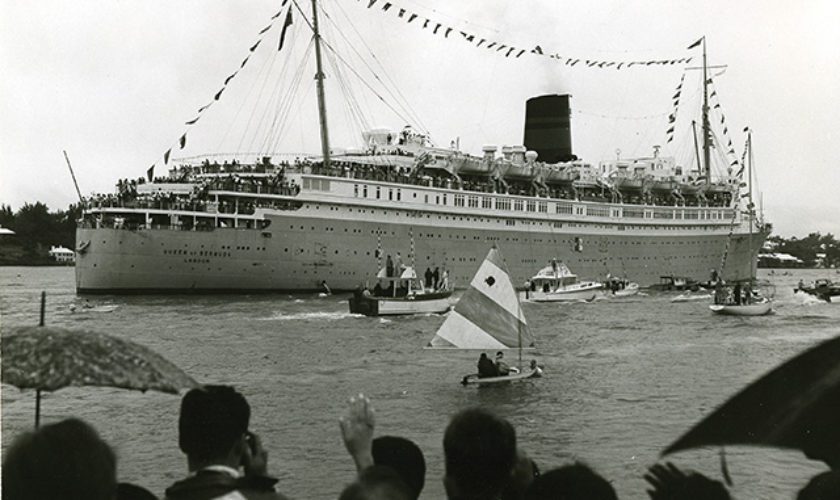 Masterworks: Hail to the Queen

On June 21, Masterworks Museum of Bermuda Art will open Hail to the Queen—a new exhibition paying homage to the 50th anniversary of the last voyage of the Queen of Bermuda luxury liner. The show will feature reminiscences from members of the family of Captain Magnus Musson, memorabilia from the ship, a large blowup floor plan, and lots of paintings, photographs and ship models.

“The idea was a result of the ongoing interest in the Queen 50 years later,” said Elise Outerbridge, Masterworks’ curator and director of collections. “We had an exhibition on the Queen and Captain Musson a few years ago which generated lots of interest and had a profound effect on the Bermudians who worked on her as well as all the illustrious passengers who were on board her many crossings.”

Alongside her sister ship, the Monarch of Bermuda, the Queen of Bermuda was sailed from New York to Bermuda on the Furness-Bermuda line during the luxurious heyday of travel from the 1930s until the start of the Second World War. Nicknamed the “honeymoon ships” and the “millionaires’ ships,” the two were very popular for wealthy and newlywed travellers, but they were also essential for bringing mail and merchandise from the United States.

“The Queen was important to Bermuda as she was a lifeline to New York, carrying passengers and products once a week,” said Outerbridge. However, wartime changed all of that.
Requisitioned for war duty, the Queen became an armed merchant cruiser and later a troopship. After the war in 1947, she returned to the Bermuda service and was completely refurbished in 1961. Unfortunately, times had changed by the 1960s and the company decided to withdraw the New York-to-Bermuda run in 1966. As a result the luxury liner was retired from service and scrapped at Faslane on the River Clyde in Scotland.

The exhibition will run until the end of November.