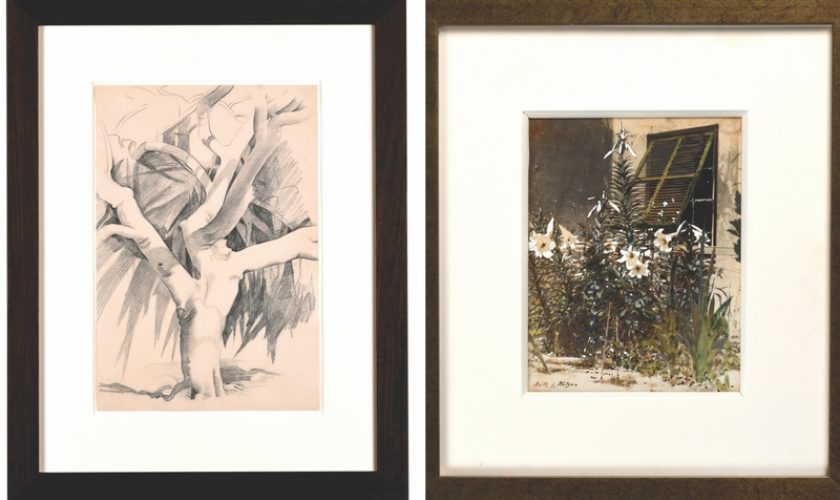 Masterworks Museum of Bermuda Art is celebrating the 10 year anniversary of their purpose-built museum with a new exhibition entitled “10 Years a Museum: Imagine!” The focus for the show will be the many acquisitions both purchased by and gifted to Masterworks over the last 10 years—many of which have never been seen before, including a very special Georgia O’Keeffe sketch that the museum recently added to its collection.

“In the 10 years since we have been a museum we have added two-fold to our collection and now have some pretty significant pieces of artwork,” said curator and director of collections Elise Outerbridge. “For this exhibit we are focusing (but not exclusively) on works that have come into the museum since we became a museum. We have had a number of substantial family gifts like the Nash gift and the Tucker archive. These have all come as result of having a facility with a purpose-built storage area.”

Another significant gift came from the Musson family. “One of the great gifts we got early on was from the Musson family—John Musson and Deborah Hollis,” explained Outerbridge. “Their father was Captain Musson from the Queen of Bermuda. He was a renaissance man, and their mother was Mac Musson who used to run the Bermuda Society of Arts. They gave us all the paintings, writing and boat models he did. That was one of the first significant collections we received.”

“We have recently been given a gift of Bruce Stuart’s work from an anonymous donor—36 or 37 pieces from when he was at his most recognised best,” added Tom Butterfield, Masterworks’s founder and creative director. “Some of those will be on exhibit.”

“This museum is the first purpose-built environment to store art and that is why we have been given this wealth of gifts,” said Butterfield. “We could double the size of this museum tomorrow and we would still run out of room. We have so many gifts on the outside of the walls waiting to come inside that it is mind-boggling.”

One such gift was a spectacular collection of just over 100 cameras that museums in Europe were interested in but the anonymous collector felt strongly that it belonged at Masterworks. “Every camera that was in this gentleman’s collection was a first of its kind in one technological breakthrough or another,” said Butterfield. “Whether it is an SX70 or a Canon with a shutter speed of 1/4000 of a second…it is a very fine collection. We got lucky, but without the museum we wouldn’t have received the gift.”

While this show will have a little something for everyone, the main draw will certainly be the new O’Keeffe which was only purchased this past December thanks to a number of locals who contributed to the fund-raising campaign. “This piece is indicative of how we built this museum,” said Outerbridge. “One of the donations was $40 because someone really wanted to give to it. Just like when we were building the building we had everything from $100 to a million dollar donation. The piece is a symbol of how the museum was built.”

A world-famous artist, Georgia O’Keeffe sojourned in Bermuda in the 1930s to recover from an illness. Like so many artists before her, she was inspired by the island’s unique light and did a number of sketches during her stay, returning to the basics of her art while she recuperated. “Although people look at this and go ‘aw, it’s black and white,’ that is what she did here,” explained Outerbridge. “Bermuda really gave her the time and space to recover.”

“It was the perfect tonic,” added Butterfield. “You can see right away in an O’Keeffe that she is so comfortable with her medium; it is what sets her apart from other artists. She is not handicapped by the medium she is using. She is free. And therefore she can express.”

“Bermuda is such a siren song to so many people that come here… it is so inspirational,” said Outerbridge. “And we have so much talent on the island. The Charmin prize was a real revelation to us this time because we had so many entries and the quality was so high. It just proves that Bermuda is such an artistic inspiration even to this day.”

“The title of our exhibition is about how hard the work has been over the last 10 years and imagine how much more we can do in the future—imagine how much growth we can have as a population, as an island,” she concluded. “We have the ability to preserve our heritage as it is important to us.”

The exhibition “10 Years a Museum: Imagine!” opened at the beginning of March and will continue until September.