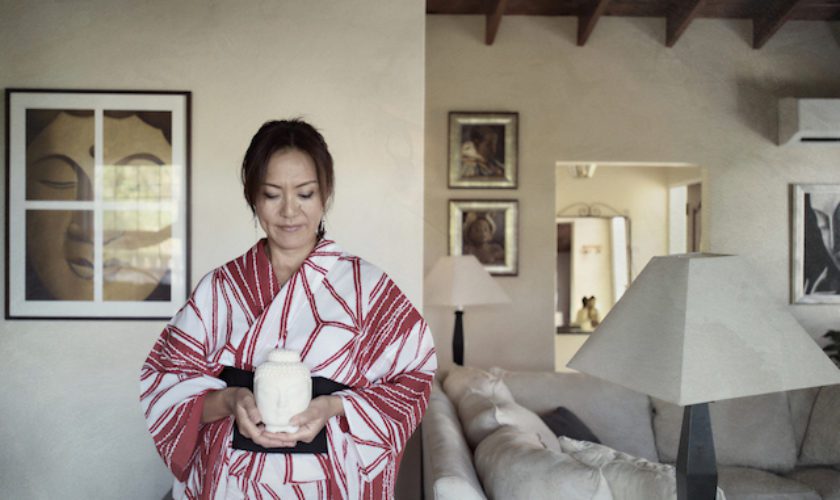 When the glow of a lamp from inside a crumbling house ignited her curiosity, photographer Amanda Temple embarked on a journey that took her into the houses of strangers, friends and public figures to learn about their stories and what turned their houses into homes. Her book Tapestry of Tales —Bermuda is the result of that endeavour.

Amanda Temple has done what so many of us have always wanted to do—spotted an interesting-looking house, knocked on the door and gone inside to look around. Her book covers the stories of 74 different homes and those who live there. “I thought it would take forever, but people let me in. Everybody was so forthcoming. I think people find it very open and liberating talking to strangers,” she said.

The photographs capture huge contrasts in the way people live and what they do. There are grand old houses, modern renovations and the last remaining wooden house in St George’s. Houses that are rented and houses that have been passed down through generations. There are cluttered tool sheds and minimalist spaces. Fighters training in a boxing ring, gardeners working on their produce, children playing and artists at work in their studios. The book also features politicians, musicians, sports personalities, a gombey and the first female limbo dancer in Bermuda. All of them have shared their histories, passions and some personal treasures.

“Once I started, I found I was getting quite a range of the melting pot that is our community, but there were some gaps so I felt that in order to weave a more beautiful and interesting tapestry, I should include some of the island’s characters, so I invited a few wellknown people to participate.”

One of the first of those well-known people was Premier Michael Dunkley. “He agreed to take part and that was the push that made me do it. I couldn’t back out now!”

What started out as randomly knocking on people’s doors ended up becoming “a tale of Bermuda’s history, traditions and current events,” she explained.

“I asked about the origin of a painted quote above a fireplace at the home of Hannah Gardner and was told it had been painted by her grandmother, Henrietta, who was one of the leading suffragettes in Bermuda. When women were given the right to vote, she cast the first ballot.

“That happened a lot,” Temple continued. “I would ask about something and unexpectedly would end up hearing a fascinating story about something else entirely. I joked that there was this book fairy guiding me and giving me all these wonderful things.”

At the home of James McKirdy, where he answered the door “with a 12-inch knife in hand” ( James was chopping carrots when he heard the knock), she was shown a 40-foot cedar tree that, as a sapling, had been on his and his wife, Judith’s, wedding cake. “According to local tradition, the tree is planted by the newlyweds and is a symbol of the growing strength of their marriage,” she explains.

Two particularly poignant pages are photographs of Johnny Barnes, taken just two weeks after he “retired” from his daily greetings at the Foot of the Lane. Temple writes that, as a child, Johnny was scolded by his mother for passing people without saying “Good morning.”

“That memory stuck with him… as I left his garden, he waved goodbye and said ‘I love you.’”

Another encounter the photographer had was with Clifton, whom she bumped into in St. George’s. He took Temple round the corner to meet his mother, Ismay Anderson Steede, who had recently celebrated her 100th birthday. After being shown the numerous family photographs inside the house—Ismay has 12 children—Amanda was invited to take a photograph of the outhouse. “The president of the USA doesn’t have an outhouse, but we have one here!” says Clifton.

Amanda Temple with her new book. Photo by Sacha Blackbourne.

There are also many people and homes that evoke new traditions and tell contemporary tales.

Gavin Smith talks about the Chewstick Foundation and the impact of the tragic fire, Jimmy Spithill shares his experience of the America’s Cup, Sophie Grewel is pictured wearing a carnival costume for the Bermuda Hero’s weekend celebration, and PLP MP Kim Wilson was photographed after the week of the labour withdrawal over the government’s proposal of a bill regarding pathways to obtaining Bermudian status.

“Kim shared that she primarily reads nonfiction and novels that are related to law and justice and we agreed how fortunate we are to have careers that we are passionate about,” writes Temple. “This led to a two-hour conversation about the events of the past week, the racial divide in our country and the serious issues facing our population.” 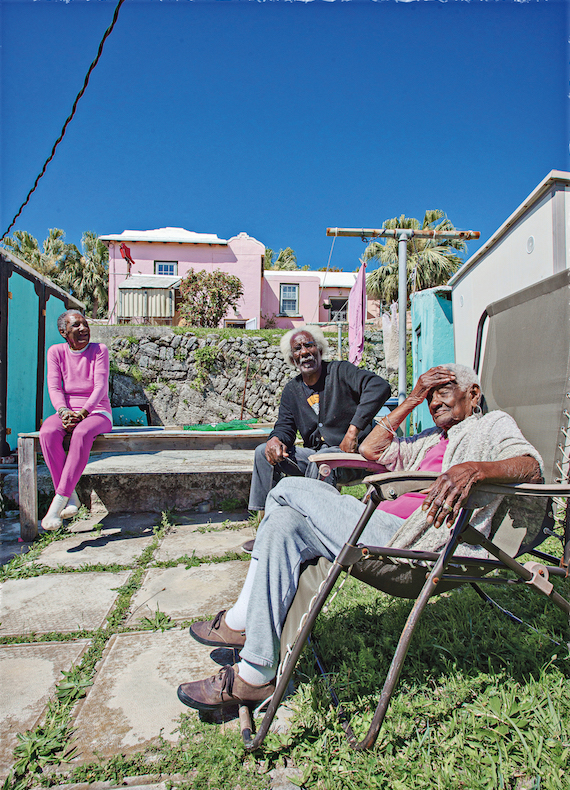 The reaction to this book from those who feature in it has been overwhelmingly positive. Wilson, who admitted she doesn’t like being photographed “at all,” said: “That’s me in my setting, that’s my home and it’s a realistic representation of what I do in my private life.”

This sentiment was echoed by Rosa Sirera, whom Amanda noticed while she was scraping peeling paint from the wall of her 200-year old house. “When she said ‘can I take some pictures of you,’ I thought, ‘I look my worst, I have no make-up on, I’m covered in paint.’ Looking back now, she captured who I really am. I love doing DIY”.

Schuyler Ruberry, who creates computergenerated music and is photographed doing so in his apartment, said he felt that the book connected “all the creativity in Bermuda and how much we have that not enough people know about yet. The photographs offer so much liveliness to them. You can see each person’s individual character so strongly.” Temple has also included photographs of her own family and some of the houses she lived in while growing up in Bermuda. Her niece, Indigo, playing and resting with her cuddly toys, her father enjoying his passion for wine, and herself with her beloved chicken, Saturday.

To order a copy of Tapestry of Tales visit www. tapestryoftales.com