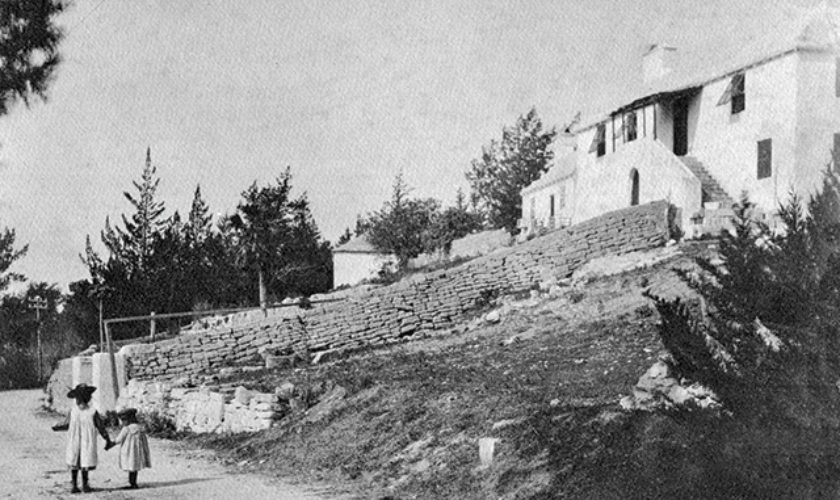 Whether one is a visitor to the island or a Bermuda resident, a read of Volume Eight of the Bermuda National Trust’s series on Bermuda’s Architectural Heritage—Pembroke—will be a delight.

Written by local historian Dr. Clarence Maxwell, it reads like a travelogue, and the historical setting that begins on the first page tantalises the reader and ensnares him into an enlightening tour of what is arguably one of the most interesting books about the nine parishes that make up this 400-year-old British colony. Bermuda’s second capital, Hamilton, is captured within its parish boundaries, and whereas the city’s location ensured the parish’s celebrity status, there is little doubt that its many bays and numerous islands and coves attracted its early residents and dictated much of its architecture.

Pembroke’s three stages of development, from the island’s historical beginnings in 1609, through the second half of the 1800s to the twentieth century, and then on to the modern era of tourism and international business, are magnificently laid out for the reader. The role played by Pembroke in the development of Bermuda’s character is encapsulated in the story of the parish’s domestic, military and public buildings and is presented to the reader in a way that is both captivating and educational.

Beginning with the story of the island’s Christian origins and the building of some of Bermuda’s early churches, the book outlines the construction of its official buildings, and sets the stage for the origins of many of the stupendous private homes that have survived the centuries and today seemingly fit seamlessly into the architectural scene that is modern Bermuda.

It is a credit to the practical design and construction of Bermuda’s buildings that their character, both ancient and modern, has lasted for centuries—through storms, extreme humidity and the ravages of time. The island’s unique architecture has blended in so well with its surroundings that this survey of so many of its “ancient” buildings and homes surprises the reader as to how smoothly the old and the new complement each other.

Nevertheless, a read of Pembroke and a perusal of its wonderful photographs definitely will allow one to travel through time and savour the days of yore when life in Bermuda was a little less harried. It makes it easy to sense why tourism from North America became so popular from the end of the 1800s, and indeed it was to Pembroke that the famous Mark Twain made his many trips to Bermuda, enjoying its beauty and its architecture.

Of great interest is Chapter 2 (“Official Edifices”) and the story of the building of Government House, and the history of the digging of the Black Watch Well on the North Shore and the much younger Marsh Folly Road, whose massive cut ended up in the Pembroke dump and disappeared!

Moving on from the architectural gems of Spanish Point and on down the North Shore, with side trips into the ‘interior’ of the parish and along St. John’s Road, the history of the early immigrants from the West Indies, starting in the late nineteenth century, is manifested in the homes built along the eastern portion of Pembroke and the area around the British military complex at the Prospect.

Indeed, the role of the British military, including the construction of “the Admiral’s house” in Spanish Point (which faced directly over the North Shore to the Royal Naval Dockyard), the building of the Prospect garrison in the east of Pembroke, and the intended fortress that became Fort Hamilton illustrates the important part Bermuda played as the “Gibraltar of the West” in the years following the American War of Independence.

The story of Eagle’s Nest and the surrounding homes overlooking Hamilton make interesting reading, especially the development of Juniper Hill and the roles played by various families who are household names even today.

The book continues with a tour that follows the road that is the entrance to Hamilton and traces the story of some of its architectural delights, from Pembroke Hall on East Broadway and “on into” Hamilton, and flows on past the Princess Hotel and continues westward to record the many gracious private homes that dot both sides of the Pitts Bay Road.

The shift from a maritime economy to an agricultural one is confirmed by a careful review of the buildings constructed to cater to the needs of the “city of shopkeepers and merchants” in Hamilton, and the ever-growing movement of goods into and out of Bermuda.

For those wanting more detail, the side bars that are interspersed throughout the book will prove fascinating reading all on their own. Everyone, from the casual reader to the armchair historian, and indeed the serious student of Bermuda’s architecture, will enjoy hours of entertainment from owning a copy of this latest publication from the Bermuda National Trust.

Bermuda owes a debt of gratitude to the Trust’s small army of dedicated specialists for the time they spent researching and compiling this work. Each of the contributors can be proud of Pembroke. This production is to be admired, cherished and kept near at hand for easy reference: it indeed is one of the best works to come out of “the Foot of the Lane” thus far.