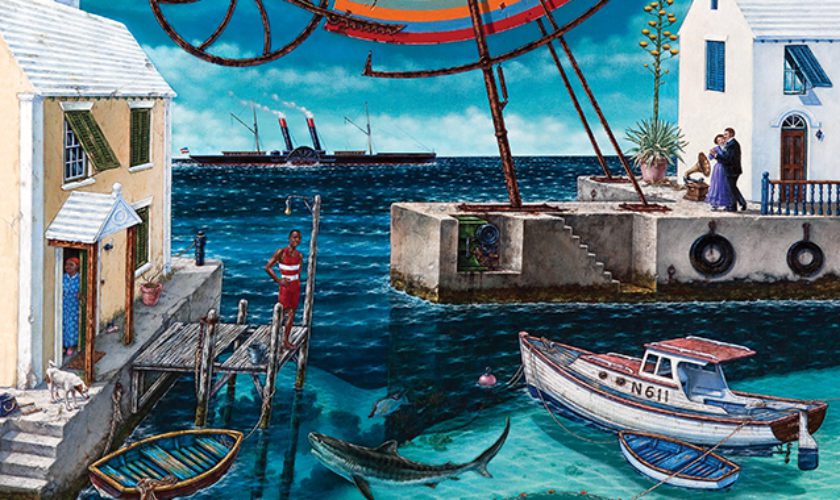 Reflections on: Return to Rainbow Country

According to artist Graham Foster, the huge wheel dominating his painting Return to Rainbow Country was inspired by the London Eye. But while the London Eye offers the visitor unique and panoramic views of the British capital, Foster’s painting shows us a series of contrasting historical and social images to give us insight into the origins and causes of Bermuda’s racial and economic disparities and divisions.

At one point, Foster says, his vision extended to imagining the whole of Bermuda’s north shore from Spanish Point to Fort St. Catherine dotted with these wheels at regular intervals.  The construction he decided on for this painting is basically a sixty-foot circular rainbow. But any direct or oblique reference to “rainbow country,” as post-apartheid South Africa has been dubbed, is denied by the sheer contradictions of the thing. This Bermuda rainbow is not a unifying symbol. The wheel is badly corroded, in some parts rusted through, and is painted with not seven, but seventeen concentric colours not one of which is to be found in the traditional seven of the rainbow. The wheel is divided into four quadrants by corroded beams with no visible support mechanism. An escapement somehow supports a series of eight-spoked wheels, the largest of which belongs to one of the Dockyard steam hoists from the 1870s, through which we can see the clouds. With its 24 spokes and escapement the whole construction seems to be a time piece. As it turns it becomes a time travel mechanism enabling us to witness historical events such as the air disaster of 1939, the 1864 wreck of an American Civil War blockade runner and various mechanisms from the Royal Naval Dockyard from the nineteenth century. The wheel is also a restatement of the concept of the wheel of fortune, symbolic of fate or luck, which rotates anticlockwise and reflects misfortune for those on the descending left side and increasing luck and prosperity for those on the ascending right-hand side.

Imagine that we are inside the painting looking northwards on the north shore, the sea spotted with whitecaps from a north-easterly wind.  The cloud cover looks more vaporous than windblown. We can see out to the darker blue water of the ship channel and beyond. The curve of Ireland Island and the Royal Naval Dockyard, normally part of any view from the north shore, is not visible from here because it’s obscured behind the yellow cottage on the left. The placement of the houses makes the scene reminiscent of Devonshire Dock.

The painting’s title leads us to ask who is returning to Rainbow Country.

Approaching Bermuda in the top left of the painting we can see the Imperial Airways Short S2 flying boat Cavalier re-enacting its 1939 crash with its port outer engine in flames, flying in a power dive leaving red blobs of fiery wreckage. However, its name has an even older historical resonance. “Cavalier” was the name given to royalist soldiers during the English Civil War (1642–49) and while Bermuda played no part in it, in the 1650s the colony was the recipient of enslaved royalist Scots and Irish prisoners of war from the battles of Dunbar and Worcester. Their names are not recorded but one wonders if their descendants still live here.

In the ship channel in the left of the painting we see the Confederate blockade-runner paddle steamer Lynx which the Union navy sank in September 1864. We can see her slinking east along the north shore to St. George’s, and can imagine her cargo of cotton, molasses and all the products of slavery destined for the European market. She flies the red-and-white-striped flag of the Confederate general Robert E. Lee’s Army of Northern Virginia. On that last voyage she was in reality also carrying $50,000 in gold. An ironic association of gold and the “end of the rainbow” therefore springs to mind. We’re reminded that post-Emancipation Bermuda profited hugely from the American Civil War by siding with the Confederate blockade runners, thus supporting the slave-owning South.

Our eye moves next to the black couple in the crumbling yellow Bermuda cottage on the left with its stuffed chimney, rickety jetty, gashed walls and dead century plant in a pot, symbolic surely for a century blighted for freed slaves since emancipation did not bring the promise of political and economic equality to fruition. A starving dog stands on the dock and a house-coated woman hides half in the door, half out. A shark looks hungrily at the man of the house standing nonchalantly under the bare bug bulb on the dangerous jetty. His shirt echoes exactly the colours of the Confederate flag on the ship. Seven crows fly off the chimney, now literally a crow’s nest. But the crows are flying not as the crow flies. They disperse in search of carrion. The black man looks at us directly with a friendly grin.

Our eyes take in the shark and the net holding a school of imprisoned fish circling clockwise, the Spanish hogfish off the eastern dock, and the wooden boat registered number N611 moored there, its roof and stern patterned in white and red, echoing the flag and the shirt. Our gaze then moves up to the cedar balustrade around the neat and opulent little white house on the right-hand side with its prosperous white couple dancing to music played on a wind-up clockwork gramophone. The woman in a purple dress and petticoat smiles, but not at us. Her partner in an Edwardian-style suit, looking not unlike a youthful Mark Twain, is completely caught up in the moment and oblivious to his surroundings. Behind the dancing couple stands another century plant in a pot, this one thriving, fully grown to roof height and laden with blooms.

Comparing the way that fortune has treated the people living on the left as opposed to those on the right of Foster’s painting reinforces the “wheel of fortune” image further. But there’s one final item. At the extreme top right in the “most fortunate” quadrant we have what appears to be an escapee from Bermuda Rainbow Country, born away on a wooden plank slung under a tethered red-and-white-striped balloon, an echo of the colours of the Confederate flag. But this person is not escaping from Rainbow Country. Instead he is seeking fortune within it. As Foster explained, what is going on is part of treasure hunting. If you are hoisted on a helium balloon some 600 feet up you can easily spot damage to the reef which could indicate a collision and, hopefully, at the end of it, a wreck and then, who knows? Treasure, perhaps even gold.  So the balloonist is carrying on one of the early traditions of Bermudian life rooted in the earliest days of the colony: the plundering of wrecks. Surely it is ironic that our wreck spotter is in the luckiest position of the wheel of fortune so that fate can carry him to find prosperity in the misfortune of others. Maybe Rainbow Country is soon to welcome another wealthy returnee.