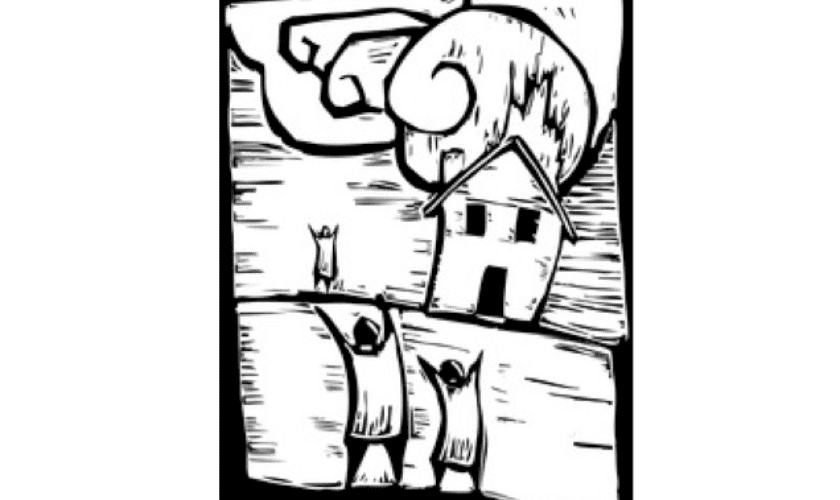 Once, Virgil got thrown out of class for talking too much. He had asked if stone could catch fire during reading time. Which irritated an already irritated Ms. Taylor who had just sent James and Jackie to deputy principle Smith’s office for fighting. She told Virgil to read, he kept asking her about the stones and fire. I mean, what about limestone? She didn’t answer him. I mean, everything burns right?  Ms. Taylor took off her glasses and rested them on her desk, she looked up at Virgil with an impatience we usually saw after lunch – when our energy had not found a way to bind itself into our limbs and tuck them under our desks. Virgil kept talking about fire and sand and rocks. He talked until Ms. Taylor rose from her chair and walked until she was hovering over his desk. Ms. Taylor pulled Virgil’s shirt collar upwards until he was standing beside her and dragged him down the aisle of desks. His feet stumbled behind him to the classroom door and with an open palm shove to his back he fell over himself into the hallway.

After that Virgil didn’t really talk that much in class, or at recess, or after school when everybody played cricket at the field behind the Tucker farm. All at once he went from being the only thing you heard anywhere to the thing you forgot had a sound. Like the time my mom sent us to our uncle in London for two weeks and we didn’t see the ocean and forgot how the waves sounded like soft cymbal crashes when they broke on the beach. It was like that for Virgil, one day he had a voice and the next you couldn’t even describe it if you wanted to.

He still played with us though – what was annoying was that his vow of silence didn’t help very much on the cricket pitch. He could never play umpire because he wouldn’t call an LBW or No Ball. He would just nod and make hand signals. So we put him in the outfield. Which had it’s own setbacks, if the ball ever strayed too far Virgil wouldn’t tell us where it went, he would just point around the vicinity to where the ball might have rolled.

One afternoon we were playing cricket and Lucy (who really was too old and too big to be playing with us) smacked our ball way past the boundary. Virgil pointed to wherever he thought the ball went and we spent the better part of an hour looking in the bushes for it. That evening after dinner I told my mama I was going next door to see Jackie’s new Atari, she said I had to be back in an hour. What I wanted to do was head to my cousin’s house, get an extra cricket ball for the next day’s game and be back at Jackie’s house in enough time to hear my mama calling me to come back home. I full-on sprinted out my front door and by the time I reached Parsons road I was clutching my chest for breaths. I was almost to my cousin’s house when I saw bright lights popping. Like fireworks but not really. The not really fireworks came with voices that grew loud and louder and were disjoint and clamoring. I found myself trailing the glow and noise moth-like till I found them. People were in the street, yelling and cursing and throwing things. It looked like the movies, like it wasn’t real. I ducked behind a parked car and watched a few men from the crowd throw lighted bottles through a window and then run as the building and ground beneath it shook.

I watched flames rise and lick the insides of the building, sending the glow and dancing, popping light into shadows that stretched down the road and into the windows of people’s homes. That morning I had heard my mama talking to my Auntie on the phone about the men they were killing and how it was maybe time to leave, pack up to London, live with my uncle for a while. My mama never got involved in things, she knew best how to turn her head, I think it was her own way of protection. She always said that my sister and I were unruly and wild. That we spent too much time playing or fighting with boys, that we were too confrontational and curious. My mama was careful and apathetic, I thought of this as I watched about ten people turn over a car and set it on fire right in the middle of the street. The melee was unbelievable, the crowd seemed to be growing and branching down multiple streets. I followed the fray, creeping behind trash cans and cars until I was grabbed by the shoulder and pulled up to face a man in all black. I didn’t say a word, for a second it occurred to me that I could’ve easily been in Jackie’s house playing Atari instead of being close to abduction and death by a complete stranger.

When the man let go of me I saw his face clearly. He was brown and youngish and carrying a huge folded sign. On his head atop a neatly picked afro was a slouched beret. What are you doing here?  His voice was softer than his face, it was shaken youth under thick hide. I’m ju-just walking home. I gazed at the ground, he had on army type boots and one of his pants legs were ripped clean open near the ankle. You shouldn’t be here. You need to go home. I wondered if his mama was wondering why he wasn’t home. I know a lot of mamas who talk about people like him, my mama did. She talked about how they were counterproductive and militant. I wondered if his mama talked about him the way my mama did, like she knew he was out cursing to the night and setting fire to buildings. Where do you live? I stretched my arm away from the furor behind us and the man set off walking in the direction. Let’s go then.

We walked in silence, the only noise was the din of the crowd dulling as we walked further and further away from them. When we reached my door I noticed he was bleeding, on his leg, near the tear in his pants. When he saw me look down he quickly covered his cut and rapped pretty heavily on my front door. My mother was frantic. She had called everyone. I was yelled at and promptly stripped of any play privileges for the rest of my foreseeable life. She looked at the man who had softened his face to a near smile, grunted a thank you in his direction and quickly pushed me in the house. Before he left he told me to stay inside and to be smart and then he was gone.

The next day they told everyone to stay indoors from sun down to sun up and they played cartoons all night on the television. The day after that, the crowds who were still out smashing and burning stayed doing so until the rain came and dampened the island for hours. That night I looked out my bedroom window trying to see over the houses and hills. I strained for the yelling voices and syncopated chaos. The adamancy of anger floating in the air and landing on the street, on cars, on windows and shattering into pieces of itself. It was then I understood how anything could succumb to it’s own felling if it was pushed enough. It was then I thought of Virgil, in his vow of silence and his unanswered question. I held to the images of the dancing light, the flickering of the island’s stone illumed and burning in on itself.