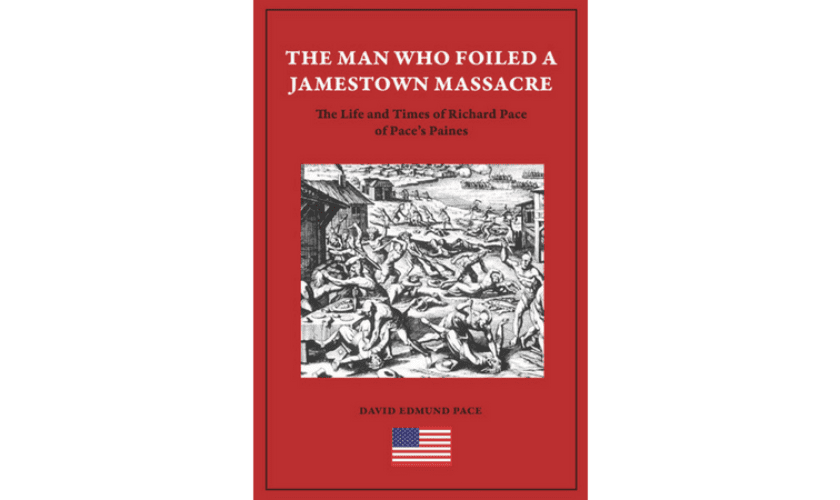 The Man Who Foiled a Jamestown Massacre

In his newly released book, author David Edmund Pace reveals the remarkable early history of Bermuda’s role in the founding of America.

This well-researched, cradle-to-grave account of the life of one man will be of great interest to Bermudians. Richard Pace was a simple London carpenter who became an Ancient Planter – a name given to the earliest colonial settlers in Virginia. But Bermuda was inextricably caught up in this momentous and wondrous story about the genesis of America.

The book describes, in the days following the 1609 landfall of the Sea Venture, what the crew surely experienced in order to survive. The likelihood is that Richard Pace was one of only a handful of artisans among the complement on Bermuda with the necessary shipbuilding skills to construct two barques: ‘The Deliverance’ and ‘The Patience.’ Incredibly, the settlers eventually continued their voyage to Jamestown, where they arrived in May 1610. There they found only 60 emaciated survivors and the colony on the brink of failure.

The author then recounts how, for the next ten years, the Jamestown settlement struggled for survival, yet the establishment of a commercial tobacco crop gave a new lease of life. Several thousand new settlers arrived, much to the concern of the indigenous native population. Such was their concern that, in March 1622, the Powhatan Confederacy determined to massacre the 1240 white settlers to regain their sequestered lands. Richard Pace got wind of the plan and rowed 3 miles across the James River to alert the Fort. Though nearly 400 died, it was only his warning that saved the first permanent settlement in Virginia from annihilation.

But there is a more profound conclusion to be drawn: without the good fortune of the landing of the Sea Venture and the bounty of these islands, there would have been no Jamestown settlement, and the history of the United States would be significantly different.

The Man Who Foiled a Jamestown Massacre, by David Edmund Pace, is available from online retailers such as Amazon for $13.99/ £9.99