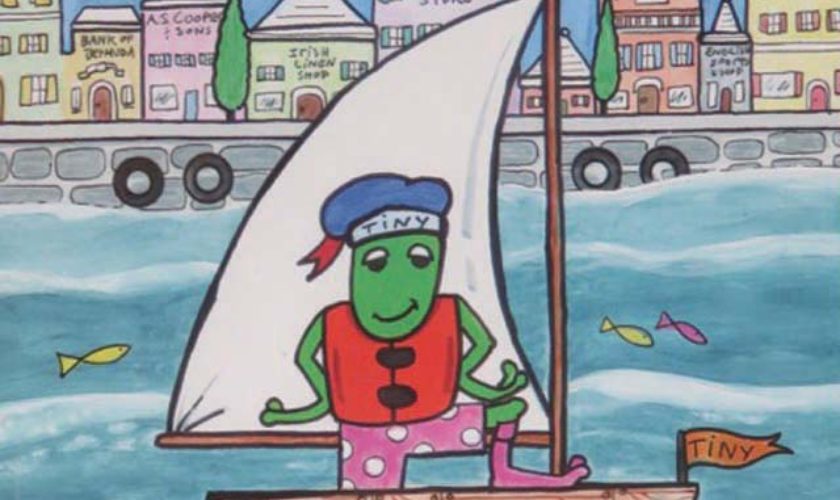 In his adventure Tiny, the lovable tree frog, wins the trophy despite things going terribly wrong along the way, including starting the race backwards by accident, getting seasick, and being picked up by a longtail. His sailboat is a wreck. Tiny sees the other big boats about to pass him and sneezes into the sail which pushes him over the finish line and he wins the race.

Mulderig credits the America’s Cup committee; her brother Rob, a sailor; and her husband, Hubert Watlington, an Olympic wind surfer, with helping bring the book to fruition, advising her on sailboat and racing terminology.

Mulderig feels Bermuda has been honoured by having such an important race brought to the island, and hopes Tiny’s latest adventure will help Bermuda’s children feel proud and excited about hosting the America’s Cup event.

Tiny the Tree Frog has participated in touring, sailing, playing cricket at cup match, cooking, narrating Bermudian history, and saying “goodnight” to the island. It is only fitting that he now wins the America’s Cup for Bermuda!

Tiny the Tree Frog Wins the America’s Cup is available at local stores throughout the island.