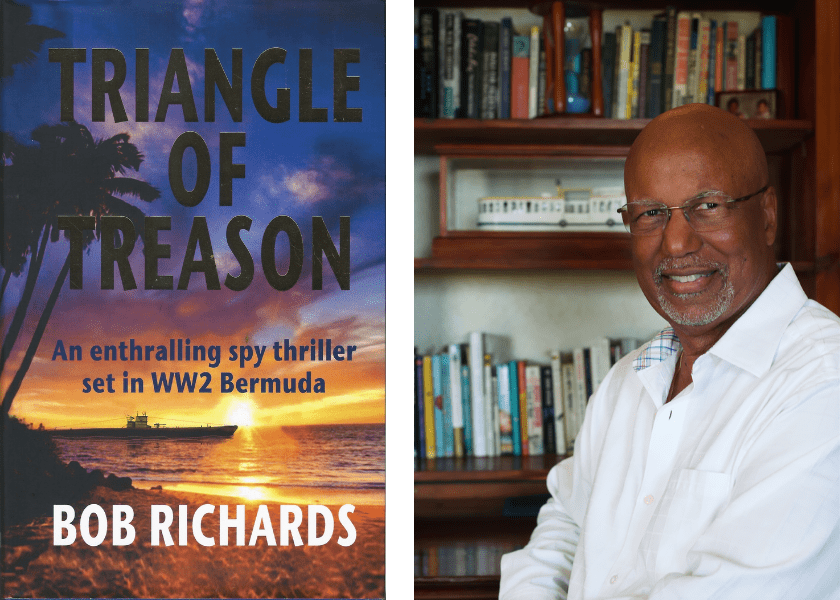 Triangle of Treason, a debut novel by Bob Richards

Growing up in Bermuda, E.T. (Bob) Richards has always loved boats, especially ferries, which he fostered an appreciation for as a child when he would board one each morning on his journey to school. As an adult Richards always planned to write a book documenting the history of Bermuda’s ferry service but his research was put on hold while he pursued a successful career in politics.

Richards’s first book post-retirement was Bermuda Back from the Brink, written about Bermuda’s economy and Richards’s time in office. It was the success of this first book that inspired Richards to write his second – but this time, he’d take a different approach.

“Instead of writing a boring history book that hardly anybody would actually read,” recalls Richards. “I thought, why not wrap an exciting novel around that history. Triangle of Treason is the result of that intention. Inspired by the likes of Ken Follet – my literary hero – the book is more than just a spy thriller. Embedded in military and geo-political history, it is a fascinating and entertaining read.”

Set in the early 1940s, Triangle of Treason introduces many compelling characters, including Captain Rodney Horatio Grant, RN, who is from an aristocratic naval family and who heroically commands a destroyer in the Battle of Jutland before he retires. His German friend Hans Lindeman shares his antipathy towards Jews and enables Grant to meet Hitler on a trip to Germany. Alan (Hooks) Jones is a Bermudian ferry pilot and part-time fisherman, an expert in navigating Bermuda’s treacherous waters by day or night. Harley Harvey from Gloucester, Massachusetts, becomes a US naval aviator (call sign Swordfish) whose squadron is posted to a yet-unbuilt base in Bermuda. He falls in love with a local black girl named Becky but the couple must keep their relationship secret in a still racially-segregated Bermuda. But as Bermudians know all too well, secrets are hard to keep on a small island.

And if that isn’t excitement enough, a Bermuda-based foreign spy is discovered sending encrypted messages to Nazi U-boats, and his demise is the genesis for a complex cover-up. The story winds up with the unravelling and untangling of many lives, allegiances, betrayals and loves.

The first of an intended trilogy, Triangle of Treason is available for sale in bookstores island-wide and on Amazon.