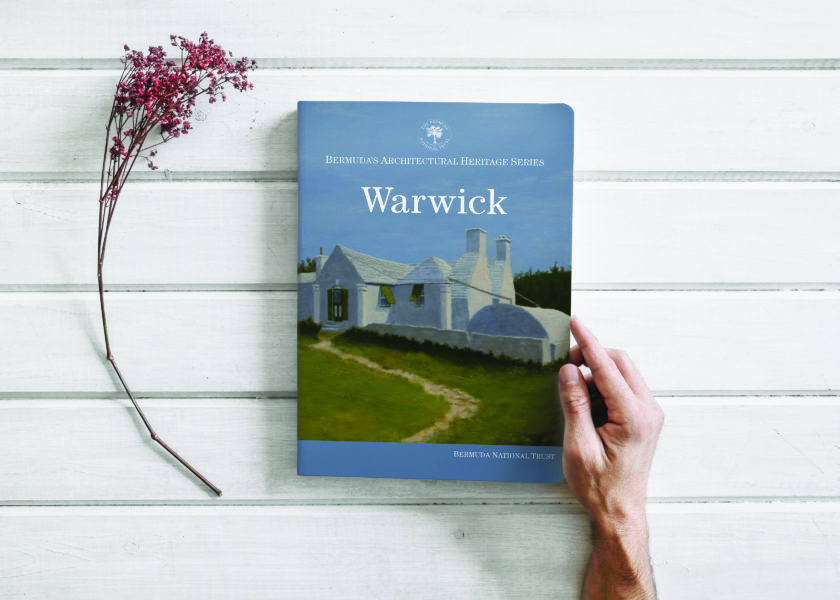 The latest in the Bermuda’s Architectural Heritage series, admirably produced by the Bermuda National Trust, is Volume Nine, which details the historic houses of Warwick. Engagingly written with crisp illustrations, this just might be the best book to date.

Architecturally, Warwick Parish has it all. From the perfectly vernacular eighteenth-century The Lodge on Keith Hall Road to the highly unusual and sophisticated late Regency period Cameron House above Warwick Pond, Warwick’s housewrights never skipped a beat. They didn’t fail the monied classes either in the designing of Georgian splendour, Smithfield, or equally grand Salt Coates and Longford.

But this book is more than about old houses. The writer, Thomas James, and his keen team of researchers bring to life the essence of old Warwick: the human aspect. No other book, certainly not since Jean de Chantal’s Gentleman Privateer, chronicles the rich personal story of Bermuda’s most noted privateer, Hezekiah Frith, and his noble Spithead, than does this book. Married three times, Frith also hid away a French mistress at Spithead whom he captured with other much-prized loot during the Haitian uprisings and who ultimately pined away and died. Frith would have known Captain “Beau Nat” Darrell, a merchant seaman whose home was Blackburn Place above Darrell’s Wharf. Known for his good looks and stylishness, “Beau Nat” is said to have swum from his father’s home on Burt’s Island, now Darrell’s Island, on the day of his wedding as it was too rough to travel by boat. He married Elizabeth Robert Tucker Beltt of Riddell’s Bay.

The archival photographs throughout the Warwick book are striking and beautifully featured. One is also given rare glimpses of houses and vistas around the islands of the Great Sound. Aspects of life during the Boer War, where prisoners were incarcerated by the thousands on several islands there, are well accounted. Two of my personal favourite family groups include the Paynter family of Cluster Bank, taken in 1943, as well as the Ward family taken on the steps of Roseville in the mid-1890s.

While many Warwick families eked out livings farming corn and other grains, it was life at sea, trading abroad in Bermuda-built sloops and schooners, that became the parish’s mainstay for upwards of two hundred years. One such merchant mariner was Captain James Darrell of Elm Lodge, which he purchased in 1789. In 1796 he advertised a wide assortment of dry goods for sale at Turtle Bay. Later, Elm Lodge was owned by Thomas Nelmes whose wife was Martha Jane Darrell. When Nelmes was 14, he was serving as a cabin boy on a Bermuda sloop when it was overtaken by a British man-of-war ship and he was press-ganged. Subsequently, he was captured by the French and held prisoner in Bordeaux. Released after two years, he later managed to purchase Elm Lodge, only to be lost at sea two years after that! Elm lodge is prominently featured. One of the rarest photos of an old Bermuda setting is highlighted there in the basement kitchen with its enormous cooking hearth and bake oven.

One of the sadder aspects of the Warwick book is that many of the old names are gone. But, because of the first-rate effort accomplished with its completion, one can learn about and admire the fine houses these old people once called home.

The Warwick Parish book is available for purchase for $55 at The Bermuda National Trust office at Waterville, the Bermuda Book Store, Brown & Co., and the Globe Hotel in St. George’s.