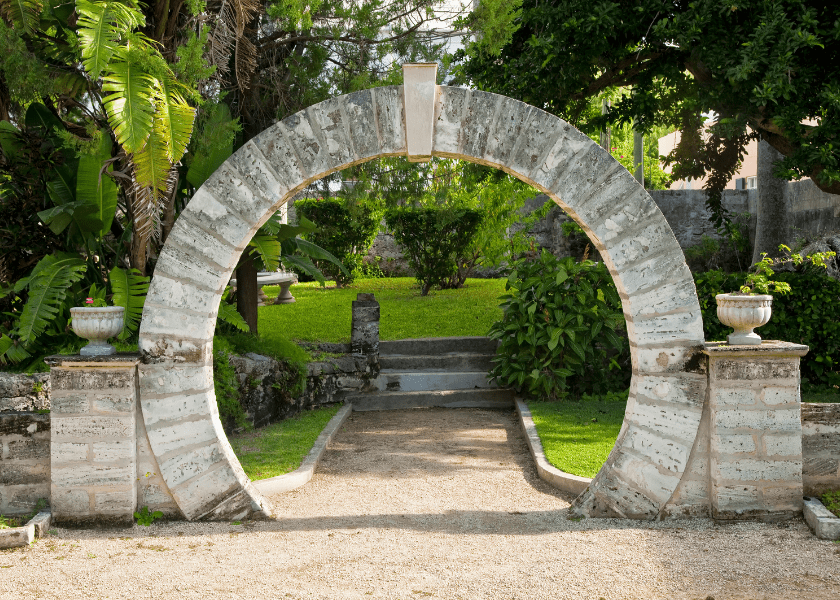 Many of Bermuda’s walkways are hallmarked by the iconic moongate, a symbol of luck to many – especially newlyweds. Local lore claims that these archways bestow prosperity and joy to couples who pass under them and make a wish, making them a quintessential backdrop for wedding and honeymoon photos. While they implore you with their whimsy, few know the history behind these odd structures and how they came to be such a celebrated part of Bermudian architecture.

The concept was brought to the island in the mid-19th Century, born from the inspiration of a sea captain who marveled at similar structures in a Chinese garden. He brought illustrations of this symbolic archway back to the Colony, with the hopes of creating his own.

Originating from China, moongates are employed as a passageway into the estates of the upper echelon. Embedded in a garden wall, their wide, open arch is seen as a symbol of inclusion and welcoming. In Bermuda, comparatively, moongates are traditionally stand-alone, framing a path or joining a low wall. What further separates the two designs is the stone, with Bermudian moongates being constructed with local limestone. Over time, the stone deteriorates and darkens, giving the moongates their whimsical, weathered look.

Moongates remain rooted in mystique, with wishful couples passing through them in the hopes of being blessed with luck and eternal happiness in matrimony. As you can tell by their shape, moongates require expert craftsmanship for their execution. Most moongates begin with a wooden frame to support the foundation, with stones being placed up and along this structure. The wooden structure is dexterously removed at the end, leaving a sturdy arch made completely of limestone. The trademark feature of a Bermudian moongate is its centrepiece, the keystone. Protruding at the apex of the arch, this accent distinguishes a Bermudian moongate from others.

There are over 40 moongates on the island, many of which adorn private properties, but these stone archways can be found across the island in public parks, gardens and on many hotel grounds, as well. Make a day out of trying to find as many moongates as you can, scouring the island for these peculiar but beloved structures. To locate a few, moongates can be found framing walkways at Palm Grove Gardens, Somer’s Garden, the Hamilton Princess Hotel,  Queen Elizabeth Park, Grape Bay beach, the Botanical Gardens, Cambridge Beaches, The Reefs Hotel, Grotto Bay Beach Resort, and Dockyard.