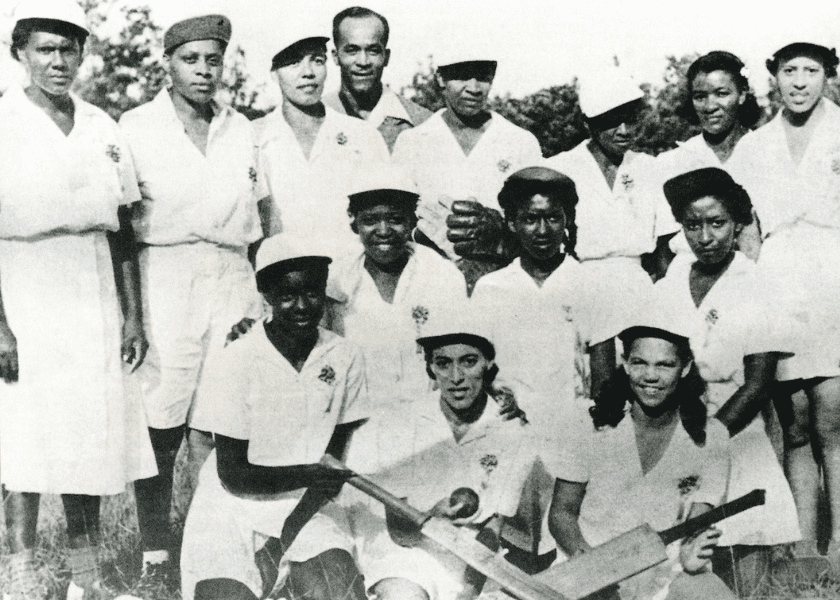 The Rose Buds vs. The Gaiety Girls: Bermuda Women of Cricket

This article was taken from our archives. It first appeared in the June 2003 issue of The Bermudian. It appears here exactly as it did originally.

When it comes to cricket, it’s a man’s world, right? Be careful in jumping to that conclusion; indeed Bermuda history proves otherwise.

Look back at Bermuda in the 1940s and you will find that not only was there an active schedule of matches between a number of rival women’s teams, but the games had a following not unlike the strong support seen throughout the years for the annual Cup Match between the Somerset and St. George’s men’s teams.

Records show that the women’s teams had not one but two annual Cup Matches. Both challenges followed the better known Somerset versus St. George’s Cup Match each August. The first of the annual women’s games was played between Somerset team, the Rose Buds Social Club, and the Junior Gaiety Girls from Pembroke. The Gaiety Girls in turn mounted a second challenge annually against the St. George’s Girls Sports Club.

Indeed a report in the Bermuda Recorder from September, 1943 stated that “all roads will lead to St. George’s Grammar School Grounds this week for the annual Cup Match between St. George’s and the Gaiety Girls.”

It continued: “The Girls are justly proud of the game and it is to them what the Cup Match is to the men.”

An earlier report, also from 1943, cited the annual match between the Rose Buds and the Gaiety Girls as promising to draw a good crowd: “A large group of persons have stated that they will attend as this is one of the great games after Cup Match.”

The teams also met for other matches but these two games were the highlight of the cricket season with the winner, in each case, taking a coveted cup. The Gaiety Girls and the Rose Buds played for what was called the Bramble Cup while the Gaiety Girls met the St. George’s Girls for a chance to win a cup donated for the annual match by the Pembroke Hamilton Club.

Dorothy Eve (nee Dickinson), now in her 80s and a founder of the Junior Gaiety Girls Cricket Club, said that their group was one of the first women’s clubs to set up. She added that once the Gaiety Girls started playing there was such a high level of interest that a number of other women’s teams formed around the Island.

“The Junior Gaiety Girls came to play as a number of neighbours were into cricket and we said why don’t we start a club. It was a good thing for those of our age group in the neighbourhood.”

Mrs. Eve said most of the players were in their 20s at the time and that the founding of the Club sparked interest elsewhere: “Then St. George’s got excited and they got a team together and we challenged each other. The Gaiety Girls were first though.”

Although Ms. Eve said it wasn’t so in her case, many of the women who joined the clubs had strong family ties to the game.

A case in point was Enith Simons (nee Simmons), the daughter of legendary Somerset player Warren Simmons and a former member of the Rose Buds Club, who said she got into playing because she came from a cricketing family. Although serious about the game, she also remembered her time playing in the Club as “good fun”.

Family tradition also appeared to sometimes be a draw at the other end of the Island with the Bermuda Recorder reporting that St. George’s team member D. Swainson had played in the style of her brother, “the famous Charlie ‘Bosun’ Swainson”.

“In a typical Charlie Swainson style she went after the bowling. The result was she hit Muriel Montague (Gaiety Girls) for two fours and two doubles which put the game on ice.”

In total there were at least five clubs formed with the Rose Buds in Somerset, two ‘Town’ teams including the Gaiety Girls and in St. George’s, the St. George’s Girls Sports Team and the Carnation Girls’ Cricket Team.

Sadly this tradition of women’s cricket clubs was not to last. Anthony “Sonny” Roberts, the well-known former Sandys cricketer and Somerset Captain, said eventually the teams started to lose members. He lamented: “Members moved on, many times because of marriage and family responsibilities. The clubs started to fizzle out as younger ones in the parish didn’t follow in the footsteps.”

However, Mr. Roberts remembered that while it lasted, the playing was good. Mr. Robert’s late wife, Valeria, was a member of the Rose Buds Club. Their grandson, Shaun Roberts, has continued the family’s cricket tradition as a player and former Captain for Somerset.

Mr. Roberts, who is now in his 80s and only recently stepped down from umpiring games, remembered the matches between the women’s teams as “being as good as the men’s games.”

The Rose Buds practised on the same grounds as did the Sandys United, now Somerset, team. Mr. Roberts remembered that there was even the occasional match or practice session between the Sandys men and women.

“They could play pretty good cricket,” he said, adding: “They all enjoyed the game. It wasn’t just playing around, they played the game the way it should be. They bowled overhand, just like a man. And there were six balls to an over and 10 (batsmen) out.”

The women kept with tradition not only in the way they played but also in their dress wearing cricket whites with the exception that trousers were replaced with shorts or divided skirts, according to Mr. Roberts.

Lest you think it was all work and no play however, the Clubs were able more than the game. Mrs. Eve said: “We used to organise socials, dances and whatever money was taken in at these events was given to children in need.”

There was also a social element to the actual matches, which according to the Bermuda Recorder sometimes drew a paying crowd (a shilling a person) of several hundred spectators. Mrs. Eve remembered that the Gaiety Girls got permission to serve refreshments after at-home games at the Montpelier Field in Pembroke.

The other teams also held social functions such as concerts and fashion shows, and it was the norm for the clubs to take out advertisements in the Bermuda Recorder. Many times the functions were organised as fundraisers.

Even with the club’s eventual demise, the social interaction of members continued. Mrs. Eve said team members continued to see each other after the clubs were no longer active, with some members staying close enough to swap Christmas gifts and birthday cards through the years.

Mr. Roberts also recalled a camaraderie between members of the Rose Buds Club. He recalled a song that the group would sing together before each of their matches and even later whenever they met, that went like this: “Once again the Rose Buds meet and each other friendly greet. To stick together is our aim, and with this motto we will gain.”

To this day Mrs. Eve said she remains close with several of her former team members, including Elaine Simons and Myrtle Seaman. Sadly, many of the former Gaiety Girls, such as Muriel Montague, Carrie Young, Rosina Packwood and M. Wilkin have passed on and with them a Bermuda tradition that is now little more than a memory.