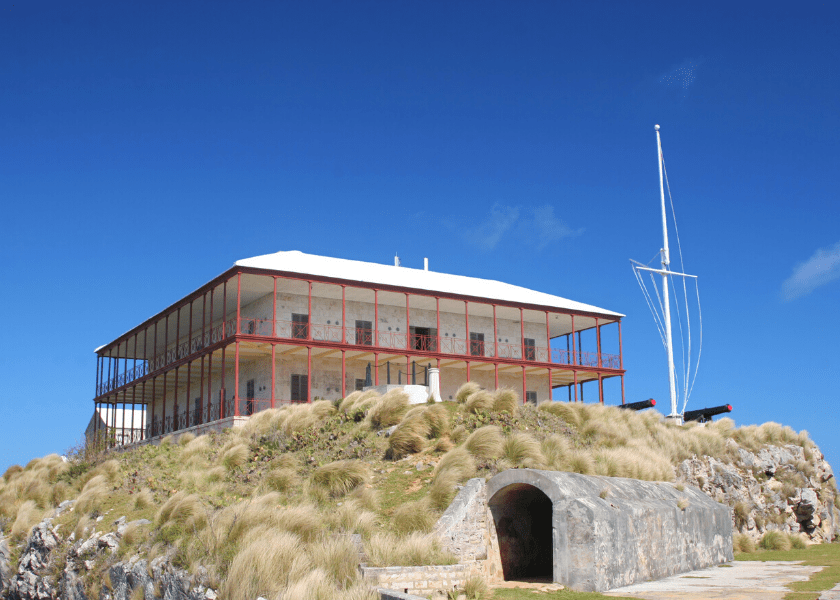 If you’re venturing to Dockyard, consider adding a visit to Commissioner’s House to your agenda.

Not only does it feature exhibits on military and maritime history, but the first floor is dedicated to chronicling Bermuda’s involvement in the slave trade. With ever-evolving collections, the museum boasts new exhibits often. The month of July saw a new installment detailing Bermuda’s genealogical history join Commissioner’s House. Crafted by local artist, Gherdai Hassell, this unique solo exhibition called Traces and Pastimes explores the theme of genealogy through archival collages and photography, providing a unique lens into Bermuda’s roots.

The building itself holds a complex history of its own. Standing atop its hilly perch since 1827, Commissioner’s House was built by the hands of local and enslaved labourers, and later, British convicts. The structure gained acclaim as the first cast iron house to ever be constructed in the world, with its frame being shipped out from England. Its original purpose, and where it garners its name, was to provide private quarters and offices for the resident Commissioner of Dockyard. Somewhat fleeting, it served this purpose for a decade before being permanently taken up by the British army.

However, when Dockyard was abandoned in 1951, Commissioner’s House and its grounds met a similar fate, left vacant for over twenty years. Weathered and decimated by time, the building was repossessed by the Bermuda Maritime Museum in 1975 and set to be repurposed – a 25-year undertaking. Restoring vitality back into the hallowed halls of this historic house, Commissioner’s House finally reopened its doors to the public in 2000.

Now, Commissioner’s House functions as a museum, displaying diverse exhibits within its walls which span Bermuda’s history and heritage in a global context. On the ground floor, explore Defense Heritage, a comprehensive display of Bermuda’s defense history that also pays homage to the local lives lost in service during World War I and World War II.  Moving through the building, the museum also features exhibits that center around immigration and tourism to the island, with installments like Azores and Bermuda, Bermuda & the West Indies as well as Destination Bermuda: A History of Tourism. As you enter the second floor, you’ll find the US Navy Room, where the focus narrows to Bermuda’s shared maritime history with the US, delving deeper into the connections between these two nations and their interwoven wartime pasts. The history of the biennial Bermuda Race, more commonly known as the Newport Bermuda Race, is detailed at Commissioner’s House, as well.

Moving from room to room, exhibit to exhibit, one can spend hours in the “Hall of History,” tracing a mural that depicts 400 years of Bermudian history and culture from floor to ceiling. Commissioned over 3 years by masterful local artist, Graham Foster, the mural was officially opened by the Queen and unveiled to the public in 2009. This whimsical masterpiece spans 1,000 square feet of wall space, rising up and around you for two-storeys. Taking the stairs to get a closer look, study the intricate detail of each and every figure and face, boat and beast.

Tracking from the earliest years of settlement to Emancipation, the first floor chronicles 200 years of enslavement in Bermuda with The Slave Trade & Slavery in Bermuda exhibit. Uncover more about Bermuda’s role in the African Diaspora as you retrace the steps and stories of enslaved persons on the island. Curated to highlight the roles of enslaved people as skillful mariners and artisans, this exhibit showcases the important contributions made to Bermudian society by those once enslaved here.