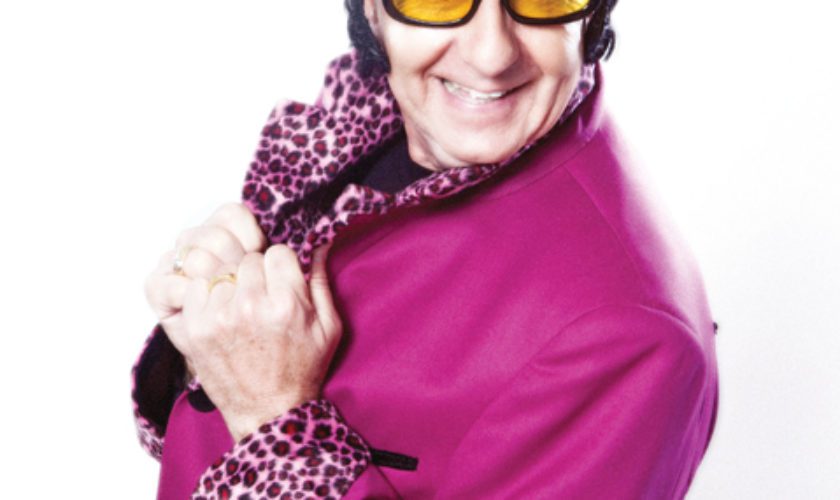 Following their massive success last year, Tony Brannon and Michael Freisenbruch will hold the second annual Lennon Bermuda Peace Concert on September 21, 2013, in the Botanical Gardens. This year’s talent includes a Beatles tribute by The FabFaux and a Bob Marley tribute by The Splashband from Barbados. Local special guests include Rachel Brown, Joy T. Barnum, Phil Morrison and The Glass Onion Band. The hilarious Jimmy Keys is also part of the lineup, and he will be master of ceremonies for the evening. Jimmy Keys has been entertaining with his special brand of music and humour in Bermuda for over 30 years. Editor Tina Stevenson sat down with Jimmy to talk about the old days, his love affair with Bermuda and why he just can’t stay away.

Jimmy, I remember back in the day what a blast we had at your performances at Henry the VIII. What year was your first gig in Bermuda and who hired you?

My very first gig in Bermuda was at the infamous Rams Head Pub on Front St., way back around September 1983, can you believe! That was before mopeds were invented.

And if you don’t mind me asking, how old were you then?

Those memories of Henry VIII and then the Golden Hind were special, albeit a bit hazy for many of us. How many years did you do that? And when did you (almost) leave Bermuda for good?

LOL! A bit hazy for me too! Yes, they were unbelievably fun times in the 80s, a magical, never-to-be-repeated era. I started at Henry’s around October 1984 and did that for three years. It was jammed almost every night with tourists, plus many locals who must have had many a late arrival at the workplace next morning!

I then went to The Golden Hind at the end of October 1984, which only lasted a year. Then I left the island for three years and went to perform in South Florida – after three months of drying out at the Betty Ford Clinic…LIAR! I thought that was the end of my Bermuda days, but no, Mr. Andy Allen, the owner of Henry’s, was determined to lure me back, and it did not take much – well, maybe! – and I returned in 1991 to Henry’s, and I tell you what, it was busier than ever! I spent another amazing three years there…so many incredible memories.

But it wasn’t that easy to get rid of you. How many times have you been back to Bermuda to perform since?

Oh, goodness, since 2000 I must have been back well over a dozen times for numerous fundraisers, New Year’s Eve shows at both Fairmont Hotels, plus private stuff and even a couple of bar gigs when we brought a bunch of – LIAR – fans from the States to de rock on a cruise ship. Imagine, seven days stuck on a boat with me. Scary!

Just out of curiosity, how many people used to pack in at Henry’s on those wild nights back in the 80s?

You know it felt like hundreds of drunken, heaving maniacs some nights, but it really only held about 80 people seated, and from the stage, it looked like another 200 standing or leaning.

Were you drinking as much as we were back then?

Oh, way more than the audience! No, seriously, they were all fake drinks.

It must have been much more civilized at the Southampton Princess when you went there in the 90s. Was it a lot different?

Yes, it was very different but just as much fun, only in a different way. They built me a wonderful showroom called The Neptune Club, with a cover charge, more like a cabaret room. It was then I actually started finishing a song! I developed my act a great deal in this room, and it lasted five wonderful years from 1994 to 1999. I loved it.

Seriously, Jimmy, is there any place in the world better than Bermuda?

People always ask me, of all the places I have performed and visited in the world, which was the best, and I always say Bermuda – no LIE!

It’s been over 30 years since you moved here. What’s the biggest change you notice in Bermuda since then?

The age of my fans! Ha, me too! It has been 14 years since my wife, Kimmy, and I left, and the most obvious change to me is the decline in the tourism market, which saddens me a lot. I don’t really understand why, because Bermuda is still the most beautiful island and has the friendliest people anywhere.

In the years since you lived here, you’ve done several special performances in Bermuda. Is your audience just a bunch of old people who remember you from the 80’s?

Ha, ha. Not totally! It’s funny, both back in Bermuda and also in North America I get an incredible cross section of people of all ages at my shows. I think a variety show like mine is a bit of a dying art, and many young people have never seen anything quite like it. They have an amazing appetite and interest for the classic rock stars of the past.

I saw you recently – after about 25 years – at the Hamilton Princess and was seriously impressed with your vocals, musical talent and humour. It was a great night. How do you keep up that energy at your age?

And it must be so hard to stay funny! Wow, thanks, Tina, for the kudos. That means a great deal to me! Yes, I get asked that a lot about the energy thing. Actually, it’s liquid Viagra, amazing stuff. They should sell it at the Bermuda pharmacies. Seriously, I have always been a little hyper, to say the least! Plus, both Kimmy and I keep fit and work out regularly with a trainer. It energizes me. Staying funny is not too much of a problem. I mean, just look at me! My friend said last week, “Jimmy, you have a good face for radio.”

What was your funniest night ever in Bermuda?

Wow, there were so many, but one of the funniest ever was in the very early days, at the Rams Head Pub, probably in 1983. They used to decorate the pub almost every night around a different theme – English night, then country night or Scottish, etcetera. So this particular night they switched the night from Scottish to country and western. We were all sitting in the pub in cowboy hats when suddenly the sound of bagpipes started up outside, and in came the pipers. They forgot to tell them the night was changed! Also, years ago I used to do a “Full Monty” routine by getting four guys out of the audience and having them slowly remove pieces of clothing – scary! – and one night, not realizing until later, I had John Kerry, the current secretary of state, with his shirt off! His wife was not amused!

You’re so famous in Bermuda I’m sure you can’t walk down the street without fans and paparazzi bugging you. Do you have a favourite hideout?

Oh, yeah, it’s tough being mobbed at the airport – LIAR! Favourite hideout has to be Dennis’s Hideaway in, um um, St. David’s!

What part of Bermuda never ceases to amaze you?

The people and the natural beauty of the island.

What are you most excited about when your plane is touching down at the L. F. Wade airport?

Meeting up with my ex-girlfriends – only kidding! I’m always excited to entertain everyone and meet up with old friends – some of them are really old!

What do you love most about us locals?

The friendliness, loyalty and amazing sense of humour.

Do you think you’ll ever get tired of us?

No, definitely not. My wife, Kimmy, and I met here – at Henry’s – got married here – at Newstead – and we both just love to return.

One last thing, Jimmy. Do you still sing “I know where you’re going” when someone gets up to go to the bathroom?

Ha, ha! No, not anymore, but that definitely worked well in the pub days!

Tickets for the Lennon Bermuda Peace Concert are available online at www.PTIX.bm.