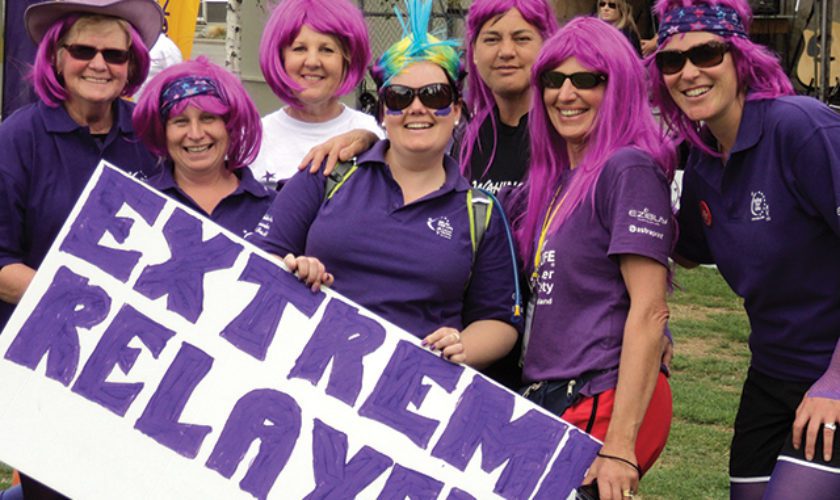 Join in Relay for Life Bermuda

I lost my father much too soon. When he got sick, I remember him saying, “Honey, I’m too young to have a fatal disease.” I replied, “I know, Poppy. I could date someone your age.” He said, “You could honey. But don’t!”

His humour and cleverness never left him, but cancer did rob us all of many more joyful years together.

Cancer has no respect. It will touch anyone. According to the 2013 statistics of the American Cancer Society (ACS), “About 1,660,290 new cancer cases are expected to be diagnosed, and about 580,350 Americans are projected to die of cancer, almost 1,600 people a day.”

“Everyone will get cancer if we live long enough,” says Tara Soares, Executive Director of Bermuda Cancer and Health Centre (“the Centre”). Soares warns that the instances of cancer are now actually rising to two out of three people.

The only response to such a massive assault on the general public is to fight back. And Bermuda will get the extraordinary opportunity to do just that this month when “Relay for Life” blasts onto the island and joins a growing international happening. For the first time, the Centre will establish the ACS’s main fundraising event—Relay for Life—here in Bermuda. It is a global assault against cancer in the form of a 24-hour relay event. Over 6,000 cities have already participated.  And now the Centre will hold the island’s very first Relay on May 30–31 from 6:00 p.m. to 6:00 p.m.

Teams of participants take turns walking the track for a whole day in a show of defiance against the disease and in support of those who are fighting it. “Cancer never sleeps,” reminds Soares. “So for 24 hours we are not going to sleep either.”

A recent article in the New York Times, “Why Everyone Seems to Have Cancer,” points out that cancer is currently overtaking heart disease as the number-one medical killer. This is happening, ironically enough, because we are actually becoming healthy enough to live longer, and the longer we live the more our bodies change or mutate. “Mutations are the engine of evolution. Without them we never would have evolved,” says author George Johnson. “The trade-off is that every so often a certain combination will give an individual cell too much power. It begins to evolve independently of the rest of the body. Like a new species thriving in an ecosystem, it grows into a cancerous tumor. For that, there can be no easy fix.”

David Green, on-staff consultant radiologist at Bermuda Cancer and Health Centre, agrees. “Your body is a finely tuned device,” says Green. “That process isn’t perfect, and things go wrong sometimes inside the cells. There are mechanisms to repair those faulty genes, [but] as you get older that faulty gene-copying mechanism also ages and is less good at repairing the faulty genes,” says Green. “And that is when cancer can happen.”

Green’s colleague, Soares, should know. Not only does she work with cancer patients and their doctors, but her own life has been touched by the disease as well. “My father has prostate cancer. My stepfather has terminal cancer,” says Soares. “There are still too many people who are losing the fight.”

The first overnight community fund-raising Relay walk happened 28 years ago in May 1985 because of Dr. Gordy Klatt.

The founder of this event is a testament to the power of the individual to create change. Klatt was a Tacoma colorectal surgeon. He knew firsthand what cancer could do to his patients, and he also knew his local ACS office could use more money for research and patient support. So he decided to do something about it. He loved to run marathons, so he went to the track at Baker Stadium at the University of Puget Sound in Tacoma and kept circling it. During his personal marathon, 300 friends and supporters camped out around the track to urge him on while many others paid $25 to accompany him on the track for 30-minute intervals. The relay idea was born. And after 24 hours and more than 83 miles, he had raised $27,000 and started what would become a worldwide event.

The event has grown into an international happening raising $5 billion dollars a year in the fight against cancer.

“It’s family oriented,” says Katrina Van Pelt, one of the Centre’s event supporters. “Food, games and activities provide entertainment and build camaraderie,” she says. “Relay represents a community coming together to fight cancer. The Relay philosophy is that those who face cancer will be supported, those who have lost their battle will not be forgotten and one day cancer will be eliminated,” says Van Pelt.

“The mission of Relay for Life Bermuda is to raise awareness—and funds—to support cancer prevention, detection and treatment.”

The 24-hour event will be held at North Field, National Stadium, and is divided into three sections, the first being the Survivors Lap, where cancer survivors march in recognition of their success and the support they received from family, friends, medical personnel and caregivers.

The second stage is called the Luminaria Ceremony, which takes place after dark so that, according to the ACS, “We can remember people we have lost to cancer, honor people who have fought cancer in the past, and support those whose fight continues.” Personalised bags filled with candles are lit and placed along the track as a shining reminder of everyone touched by cancer.

Then there is the final event, described in the literature of the ACS as inspirational: “This emotionally powerful ceremony inspires Relay participants to take action. The Fight Back Ceremony symbolizes the emotional commitment each of us can make in the fight against cancer. The action taken represents what we are willing to do for ourselves, for our loved ones and for our community to fight cancer year-round and to commit to saving lives.”

Organizers of the Bermuda event are constantly reminded of the fear that accompanies the diagnosis of cancer. “It must be terrifying to hear the words ‘You have cancer,’” says Deborah Titteron Narraway, the marketing and fund-raising manager for the Centre. Like millions of others, Narraway has had her own personal experience with cancer. “My mom is a breast cancer survivor diagnosed at the age of 37 and my uncle has terminal prostate cancer,” says Narraway.

You cannot ignore cancer and you cannot ignore this island-wide happening or its message for anyone touched by cancer. “They’re not alone in Bermuda,” Narraway says. And what better way to express that sentiment than to turn out in vast numbers for the Relay?

In essence, organizers want Bermuda to “come to the party.” Find friends and coworkers to join you in this mission and sign up as teams. There is a festive and competitive spirit to the event. Bermuda may be a small island, but it does not mean it cannot shine on an international stage and outperform hundreds of other regions which are much larger.

Bermudians have huge enthusiasm for each other and for sport, and there is no greater sense of competition than when the opponent—cancer—seems almost unbeatable. “Bermudians love a ‘get-together,’” says Van Pelt, “and this is a local fund-raiser for a local cause. What’s more, 95 percent of funds raised will stay in Bermuda with Bermuda Cancer and Health Centre.” You may register as a team through the website bermudarelay.com or e-mail the Relay team at team@relayforlife-bermuda.org for more information.

Ironically, Klatt, the man who founded Relay and who has worked so hard to fight cancer, is now waging his own personal battle against the disease. In 2012, Klatt was diagnosed with stomach cancer and told the ACS staff as much when he wrote them this letter: “Throughout the years I have s
poken and written about how cancer can personally affect everyone. It affects the rich, the poor, and all nationalities and cultures around the world. About four weeks ago I was diagnosed with stomach cancer, and I have begun my battle with this disease using chemotherapy.”

“I am even more energized to defeat this disease worldwide. I will again be with all of you in spirit this Relay season—even more so this year. Celebrate the survivors; remember those who lost the battle and fight back!  We all need to celebrate more birthdays and by relaying we keep the hope alive through education, community involvement and fundraising for ongoing research.”

As Reuel Johnson, National Vice President for Relay for Life, points out, “The best way we can pay tribute and honor Gordy is to redouble our efforts in the…Relay season…adding one more team, one more team member or one more additional donation…and creating an extra meaningful Relay experience for those touched by that Relay spirit that we all learned from Gordy.”

The Centre’s Dr. David Green points out that all cancers are either genetic or environmental. “If you are part of the 5 percent who carry the gene for breast cancer then your risk of getting breast cancer soars to 80 percent,” says Green. That’s the genetic component and early testing for early detection and treatment are vital there. Then there are the environmental causes of cancer. “Evidence for that,” says Green, “is provided by a subset of the population of a country where breast cancer is very uncommon who migrate to an area where breast cancer is very common; given enough time the newcomers will develop the same incidence of breast cancer as the general population.”
So for Green and the staff at the Centre, a major component of the Relay experience is getting the message out that you can prevent many cancers all by yourself.

“It’s one thing if you develop lung cancer because you smoked cigarettes your whole life, right?” says Soares. So the Centre urges you to put the cigarette down. As Johnson’s article in the New York Times points out, “Where antismoking campaigns are successful, lung cancer, which accounts for almost 30 percent of all cancer deaths in the United States, is steadily diminishing.”

Cancer can happen enough all by itself without actually offering it an invitation into our lives. “It is about moderating,” adds Soares, “Half of all cancer deaths are preventable, so that is a message we want to get out there. This event is about the advocacy, the education, the prevention and, for us, supporting better treatment for Bermuda.”

In addition to antismoking campaigns, there are other success stories in the battle against cancer provided by people who simply took better control over their lives. According to the New York Times, “Worldwide, some 15 to 20 percent of cancers are believed to be caused by infectious agents. With improvements in refrigeration and public sanitation, stomach cancer, which is linked to Helicobacter pylori bacteria, has been significantly reduced, especially in more developed parts of the world. Vaccines against human papilloma virus have the potential of nearly eliminating cervical cancer.”

Green sees another area that needs work in Bermuda. “Given that obesity is such a huge issue here and throughout the developed world, the message just is not getting through,” says Green. “Everybody should be aware that if they are overweight and drinking and smoking then they are going to die younger than they would otherwise. In other words, that finely tuned instrument which is our body can only repair so much abuse.”

Green’s greatest hope for this month’s Relay event is that people in Bermuda will “kickstart” 2014 with a better lifestyle. “You get so much out of being healthy,” he says. “You just enjoy life more. You sleep better. You relate to people better. You just feel good about yourself.”

Click HERE to register and participate in Bermuda’s Relay for Life on May 30-31. For more information about Relay for Life, click HERE or get into contact with Bermuda Cancer and Health Centre by calling 441-236-1001.