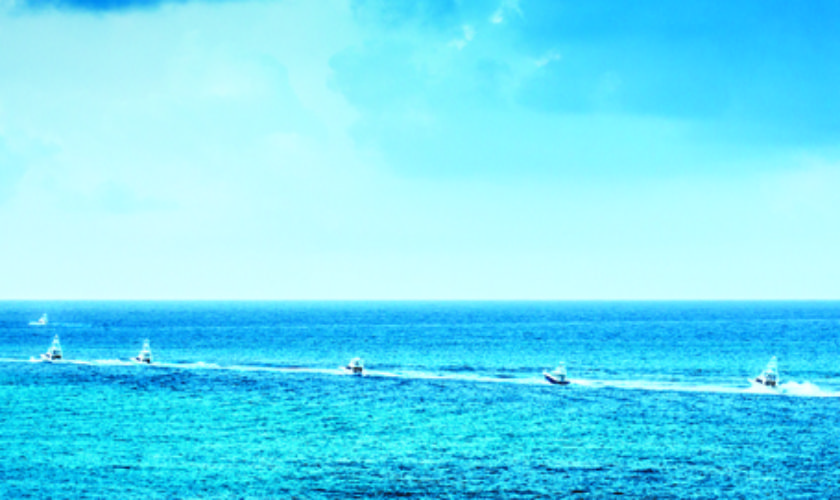 This is Marlin Country

It is a gorgeous Bermudaful day, the sun beats down brightly as the white wake of the boat dissolves into snow-like patches of bubbles against the bluest blue imaginable. The boat drones when, suddenly, all peace is shattered as the water explodes and a majestic blue marlin reaches for the sky.

Some say boring, some say exhilarating, but there is no denying that fishing for the mighty blue marlin changes lives.

The quest for consistent numbers and huge blue marlin are what bring upwards of 40 state-of-the-art sport fishing boats to the island every June and on into July. Their presence becomes obvious as outriggers, towers and antennae dominate the marinas’ skylines and talk turns to fish.

The Bermuda Triple Crown consists of three tournaments which are all fished during the month of July. Not only does this coincide with the time that the biggest fish are thought to be here, but it also allows visiting boats a chance to return to safer harbours in advance of hurricane season. Among the various local tournaments that comprise the Bermuda Triple Crown, something close to one million dollars is up for grabs.

Prior to the actual commencement of the Triple Crown, there is the Bermuda Release Cup, a family-friendly two-day event that concentrates on releasing billfish and is designed to encourage participation in the major events that follow.

The first of these competitive events is the Bermuda Billfish Blast. Although primarily a release event, this coincides with the Blue Marlin World Cup (July 4th, annually) and, for this reason, each boat is allowed to land one fish. The latter event is in its 30th year and is fished all over the world with a simple objective: the biggest fish over 500 pounds, winner takes all. Last year the “all” was $561,600, making this well worth working for. Add this to the money already at stake for the Triple Crown events, and the hunt for big fish becomes an obsession.

It is no surprise that Bermuda attracts competitors from overseas. Bermuda, along with Kona, Hawaii, boasts a World Cup winner eight times. Granders (1,000 pounds-plus) are not uncommon here. Big fish and the relative ease of access from the US east coast make this Island the choice for serious tournament contestants.

Following the three days of the Bermuda Blast is the Bermuda Big Game Classic, another three-day quest for the ultimate game fish and the real showpiece of the series. As with the previous event this is a big money modified-release event.

The modified-release format means that all fish under the minimum weight (in this case, 500 pounds) are released. Each release scores a fixed number of points, for example, 500 for a blue marlin. Fish that are landed and weighed score one point per pound. This can lead to some rather strategic decision-making because a quick release and 500 points may be expedient over boating a fish and then having it just clear the minimum by a few pounds or, worse luck, failing to make the minimum—thus incurring a substantial penalty. Smaller billfish species such as white marlin also score points but far fewer than blue marlin.

With that much money and so many prizes on the line, what keeps the competitors honest? Simple as it may sound, a verifiable system of digital photo/video evidence is used. In these, the fish must be clearly visible for identification purposes with a code number that is only assigned at the time the fish is reported as hooked up. Points are not awarded until the process has been completed.

Rounding out the month is the Sea Horse Anglers’ Club Billfish Tournament, the island’s oldest billfish tournament. Run along similar lines to the other events, this tournament was the pioneer of the modified-release tournaments and set the high minimum weight that much of the rest of the world has now followed.

All of the Bermuda events are qualifying events for the coveted IGFA Offshore World Championship Tournament that pits winners from all over the world into a final showdown for bragging rights.

Details of all these tournaments, entry forms and additional information can be found on the internet at www.bermudatriplecrown.com.