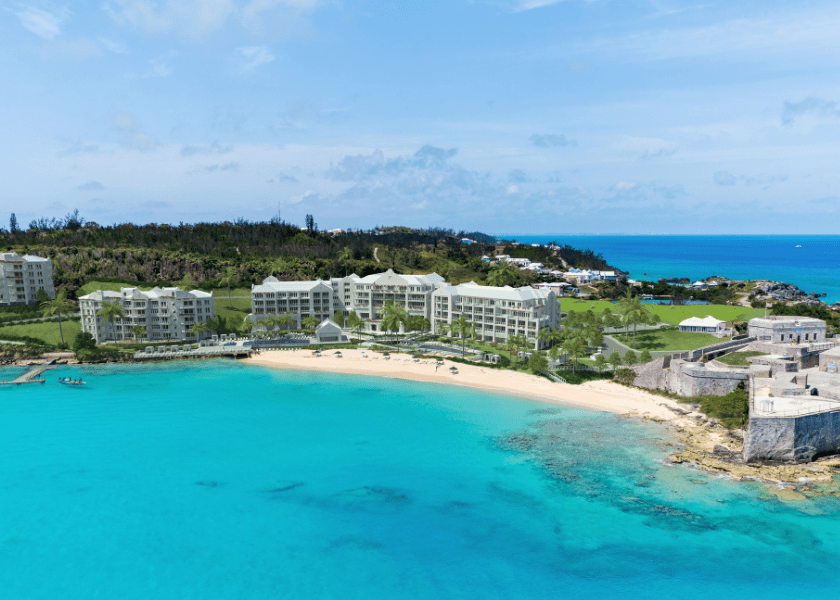 This spring, luxury hotel chain St Regis is set to open its doors in St George’s. The brand is renowned for its bespoke service and refined elegance, and their Bermuda address is no exception. At the edge of the eastern end of the island and surrounded by panoramic ocean views, the five-star resort rests on the tranquil shores of Gates Bay and neighbours historic Fort St Catherine. It is evident that throughout all aspects of the hotel and residences, St Regis has thoughtfully placed its iconic touch of luxury on the island, whilst maintaining an appreciation for Bermuda’s historic past.

The 124-acre parcel of land where the hotel sits is where the Holiday Inn once stood in 1973 before ownership was transferred to the Club Med Group in 1985, rebranding the site as St George’s Cove. As a result of damages caused by Hurricane Emily, the hotel closed its operations in 1988. The property remained derelict for many years with several failed attempts to resurrect it until, in 2008, the government demolished it with 70 pounds of gunpowder. In 2015, Hotelco Bermuda Holding Ltd, part of hotel firm Desarrollos Hotelco Group, was selected as the developer to transform the abandoned space into a $150 million five-star resort. In 2017 Marriot International was awarded the contract with Hotelco to build the St Regis Bermuda, “the most exclusive and luxurious development on the island.”

The hotel is divided into three blocks, each comprising five floors for a total of 120 lavishly appointed guest rooms. Also on site are two blocks of residences, each with 15 luxurious apartments, including penthouse suites that each boast a private rooftop plunge pool. The interiors of both seamlessly blend timeless elegance with Bermuda bliss. Colour palettes consist of neutral tones reflective of the island’s natural landscape, embellished with more modern geometric shapes to create a contemporary look. Serene views of the Atlantic Ocean are given prominence in all the rooms and can be enjoyed from one’s own expansive terrace or deep-soaking bathtub. Guests also have the use of a private butler, a signature of the St Regis brand and testament to the impeccable standard of service one can expect to receive. 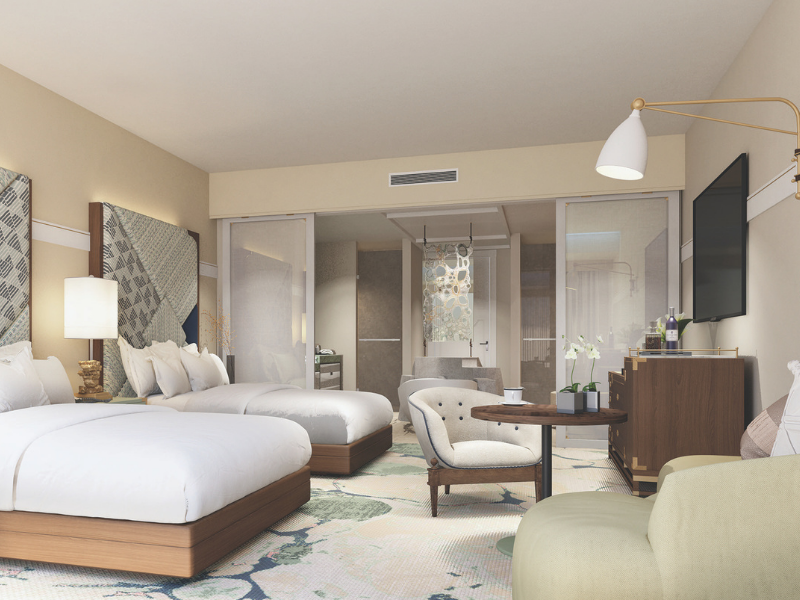 Unlike most hotels where guests typically enter a lobby, St Regis guests arrive through “The Great Hall,” welcomed by breathtaking ocean views and a festive drink. The concierge is tucked away to the side offering a more relaxed and European-inspired sit-down check in. From there guests can unwind and begin to enjoy their luxurious retreat immediately. Inspired by cottage living, The Great Hall incorporates a double fireplace and tray ceilings with wooden beams that pay homage to Bermudian architecture. The height of the room gives the space an air of distinction, and refined elegance is evoked through lofty chandeliers. The St Regis Bar can also be found on this entry level floor and promises a vast selection of bespoke cocktails, including the iconic St Regis Bloody Mary crafted as a Bermudian version, local ingredients fused with island flare.

Not only does Bermuda provide a stunning setting for the luxury resort, but it has also inspired the architectural design of it. Refined details have been included in the construction of the resort through the masterful eye of local architecture firm OBMI. Each building is capped with a traditional white roof, and inside you can find structural details that echo the Bermudian vernacular. “The hotel complex [was] built with significant detail, modern elegance, innovative solutions, and [an] appreciation of the unique character and culture of Bermuda,” says OBMI. Intricate designs from Fort St Catherine have even been replicated on the exterior of the hotel, unifying the historic landscape with the new, modern development of the resort.

On-site amenities are as deluxe as one might expect. The pool deck features private cabanas, two swimming pools and lush loungers that meet the horizon of the Atlantic Ocean at eye level, providing a secluded escape with unparalleled views. Guests can also indulge in personalised treatments at the Iridium Spa. For those more active, the pristine greens of an 18-hole golf course await. Designed by Robert Trent Jones, the course provides endless views of azure waters and incorporates sustainable initiatives such as the use of recycled glass that lines the bunkers and greens. Notably, St Regis will donate the proceeds of its first tournament to the recovery of Fort Albert, a fort built in 1842 which is in close proximity to the southern side of the resort but has remained inaccessible since the implosion of the previous Club Med site.

In addition, guests can chance their luck at the resort’s casino for a glamorous evening of table games. The casino is a first for Bermuda and comes after years of debate and an uncertain future. It has been more than six years since the Casino Gaming Act came into effect, but financial and banking considerations hindered the process. Amendments have since been made by the government to ensure that the island is equipped to successfully operate gambling establishments and as a result the St Regis casino will be a tremendous and notable achievement for Bermuda. It is also embracing modern technology by operating completely cashless. 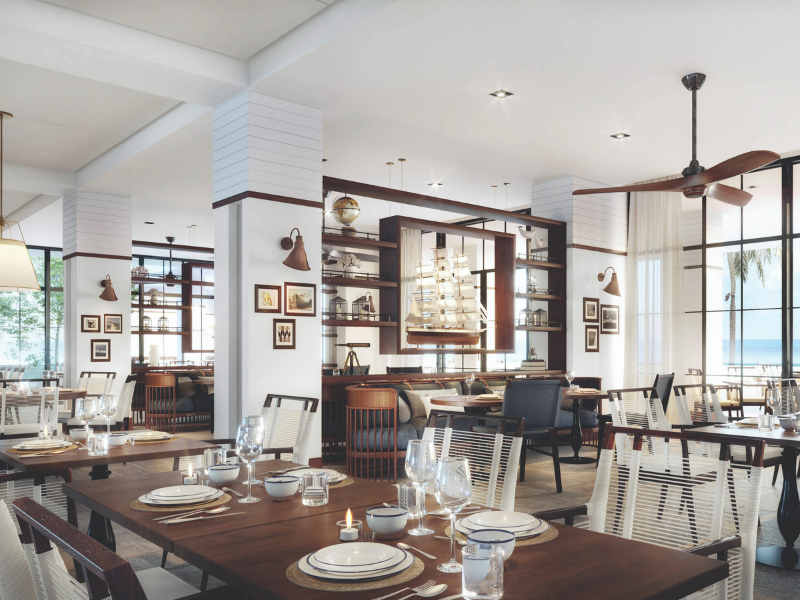 Locals will have the opportunity to enjoy aspects of the resort even if they don’t book a room. BLT Steakhouse is open to the public and features a modern bistro menu curated by renowned French chef Laurent Tourondel. There is also a ballroom and boardroom that can be booked for private events. Usually, these function areas are hidden away in the back of a resort, but St Regis has positioned them front and centre on the ground floor overlooking St Catherine’s Beach, with designated patio space.

Located within walking distance from the Old Town of St George, the resort will offer an extensive list of excursions for the avid explorer. Part of the St. Regis vision is for their guests to step back in time and immerse themselves in the historical charms of the eastern end of the island. Naturally, the expectation for St George’s and its people is that the opening of the resort will not only offer increased employment opportunities, but also bring much needed economic revitalisation to the Old Town and breathe new life into the historic UNESCO World Heritage Site as a significant tourist destination.