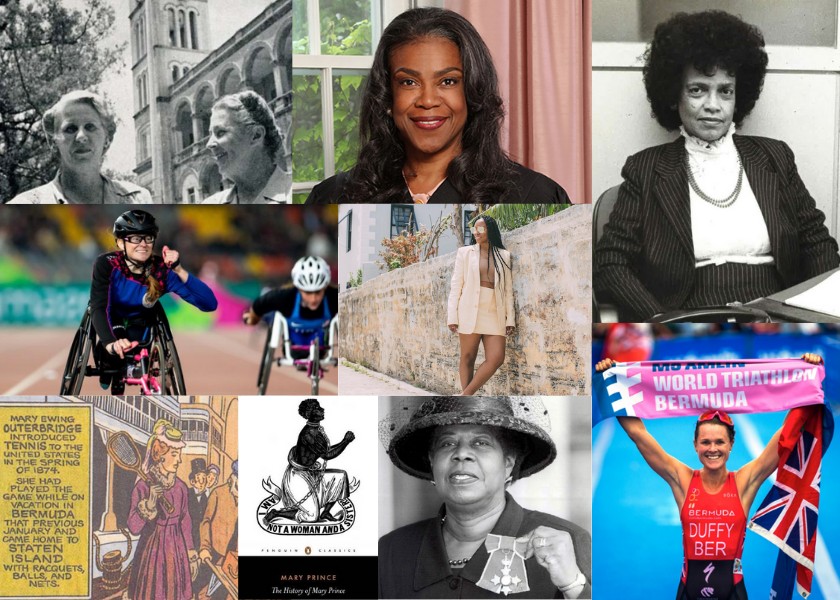 10 of Bermuda’s Most Influential Women

These iconic Bermudians have paved the way for women, not only in Bermuda, but also around the world. Teaching empowerment, strength and courage, our list of female leaders, movers, and shakers span across time and space. Some of the women celebrated in this list, such as Flora Duffy and Mary Prince, are known across the globe while others are local heroes. One thing these women share is their ability to inspire the next generation of Bermudians.

Mary Prince
The autobiography, The History of Mary Prince, was the first book to be published in Great Britain about the life of a black woman. Mary Prince was born into slavery.  The opening line of her autobiography states ‘I was born at Brackish-Pond, in Bermuda’.  Although Prince, herself, could not read or write she was able to dictate the complete narrative of her life and her experiences as a domestic enslaved person in Bermuda and Antigua as well as the horrors of the plantation-style salt ponds in Turks and Caicos. Her story was published in 1831 before slavery was abolished and played a crucial role in the abolitionist movement in England. The stirring call for freedom at the conclusion of her story highlights the crucial role women, often overlooked, played in ending slavery:

‘I will say the truth to English people who may read this history that my good friend, Miss S——, is now writing down for me. I have been a slave myself—I know what slaves feel—I can tell by myself what other slaves feel, and by what they have told me. The man that says slaves be quite happy in slavery—that they don’t want to be free—that man is either ignorant or a lying person.’ – Mary Prince, The History of Mary Prince: A West Indian Slave. 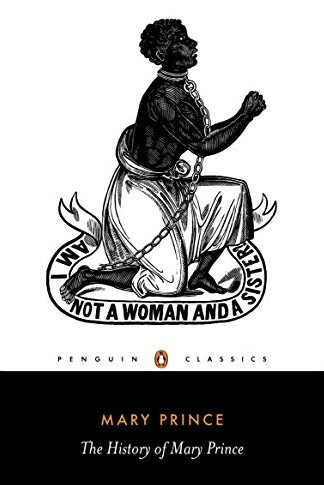 No images of Mary Prince exist. This is the cover of the Penguin Classics edition of her autobiography.

Dame Lois Marie Browne-Evans, DBE JP
Bermuda’s first national hero, Dame Lois Browne-Evans was not only Bermuda’s first woman lawyer and first female Opposition Leader, she was also Bermuda’s first female Attorney General. Dame Browne-Evans was only 26 years old when she became the first woman ever to be called to the Bermuda Bar in 1953. She shaped her professional and political career around her fight against segregation and racism. Browne-Evans was also the first black female parliamentarian. She was voted in the first year that the PLP ran, the same historic year that people who did not own land could vote. She won the North Devonshire seat in a landslide pushing out prominent white lawyer Bayard Dill, a member of the small white merchant group who had ruled Bermuda for centuries. Her election was proof that all Bermudians could have their voices heard and accounted for in the upper echelons of government.  Browne-Evans took part in every major political event during her 40-year career and won her seat in every subsequent election until her retirement in 2003. In 1999, Browne-Evans ended a party-wide boycott when she accepted the title Dame Commander OBE rewarded to her by Queen Elizabeth. She died in 2007, and a year later post-humorously became the first National Hero to be celebrated on the new holiday National Heroes Day. 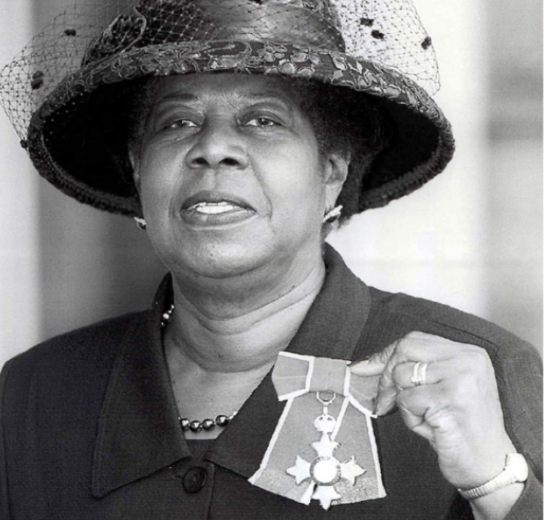 Flora Duffy
Flora Duffy is an Olympian gold medalist triathlete. She competed for Bermuda in the 2008, 2012, and 2016 Olympics, and in her fourth appearance at the Tokyo 2021 Games she made history for our island winning the gold medal in the women’s triathlon event. It is the first gold medal for Bermuda at the Olympic Games and only the second medal in our entire history. In addition, she has won an astounding 9 world championships in various triathlete races and became the first female Bermudian gold medalist in the Commonwealth games. Duffy is also the only person ever to win three global triathlon titles in one year. Cars can be seen driving around Bermuda with “Go, Flora, Go” stickers in their rear windows in support of Duffy. These were made for the WTS Triathlon that was held in Bermuda in 2018, which she also won to the delight of local fans. Duffy’s athletic prowess has smashed records across the gender divide and is an inspiration to young female athletes everywhere. The Queen of England recognized Flora’s achievements in 2018 when she awarded Duffy with the OBE for her services in sport to Bermuda and the world. 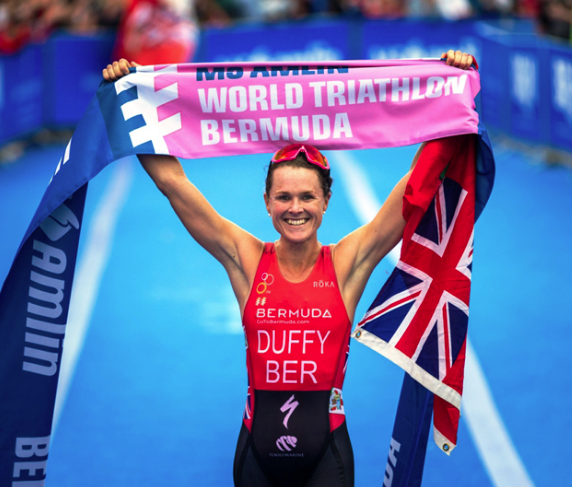 Dame Pamela Gordon
Pamela Gordon was sworn in as the Premier of Bermuda in the spring of 1997. This made her not only the first female Premier, but also the youngest premier ever at that point. Pamela is the daughter of the famous civil rights activist and trade unionist E. F. ‘Mazumbo’ Gordon, an accomplished black parliamentarian in 1940s and 50s. Pamela was born six months after her father’s sudden death in 1955 and was the youngest of her five siblings. She left Berkley Institute at 16 year old, pregnant with her daughter Victoria. Young motherhood did not prevent Pamela from owning and managing her own restaurant, obtaining a bachelor’s degree in commerce, and entering Bermuda politics at the age of 35. Pamela was recognized by Queen Elizabeth for her achievements and titled Dame Commander of the Most Excellent Order. She also received an honorary degree from Queen’s University in 2013 and has been celebrated in New York for her inspiring story of female empowerment. 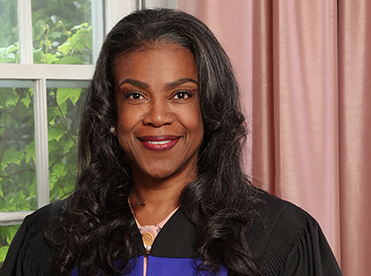 Dr. Eva Hodgson
Dr. Eva Hodgson was an author, activist and an icon in Bermuda for her continual fight to open Bermudians’ eyes to the continual impact of slavery and segregation on our island that still exists to this day. Hodgson was the author of books such as Second Class Citizens, First Class Men, in 1963, A Storm in a Teacup (1989), The Joe Mills Story (1995), and The Experience of Racism in Bermuda and in Its Wider Context (2008). She also contributed to the seminal 1974 collection of academic essays, Massa Day Dead? – Black Moods in the Caribbean, writing about “Bermuda and the Search for Blackness.” In 1967, she moved to New York to study at Columbia University. She received two Masters degrees at Columbia, before embarking on studies for a Ph.D. in African history and black American history, which she obtained in 1980. Her personal canon speaks to the on-going fight for racial equality in Bermuda. Hodgson was politically active in CURB, (Citizens for Uprooting Racism in Bermuda), and was a member until her passing in 2020. The Minister of Labour, Community Affairs and Sports the Hon. Lovitta Foggo JP, MP stated “Dr. Hodgson was a person who consistently, unabashedly and unashamedly told the truth about race and racism in Bermuda. She did this at a time when the stakes of such bravery were incredibly high”. 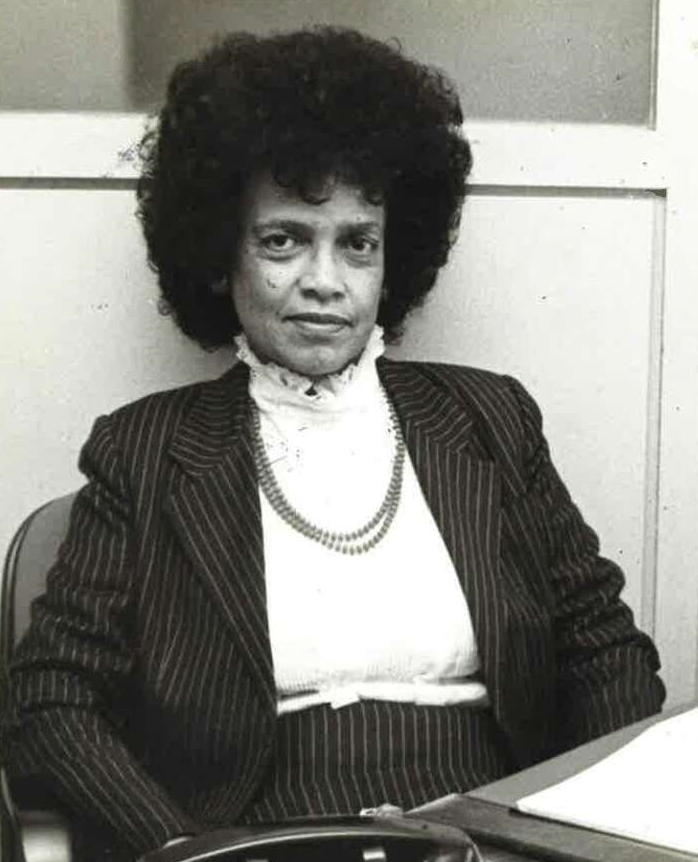 Hilda Aitken and Edna Watson
Aitken and Watson were the first two women to be elected to the House of Assembly in Bermuda. Both women became members of parliament in 1948 only four years after the Suffragette Movement won women the right to vote. Aitken was born in Smith’s and grew up in Bermuda. She was not the most politically progressive woman and opposed universal adult suffrage, but she was an advocate for women’s reproductive health. She pushed for the inclusion of birth control in the Public Health Bill and believed this controversial opinion was the reason she lost her next election, 5 years later.

Watson was not born in Bermuda, but moved here in her thirties with her husband. She was the first woman to speak in the House of Assembly and the first woman to chair a government board. At the age of 43, Watson survived a brush with death during a plane crash where she was hailed as a hero for saving the life of the plane’s captain. She was awarded the Royal Humane Society’s Silver Medal for her courage during the ordeal. When World War II broke out two years later, Watson went to work as a nurse for the Canadian Army and received a citation from the Royal Red Cross for her service. 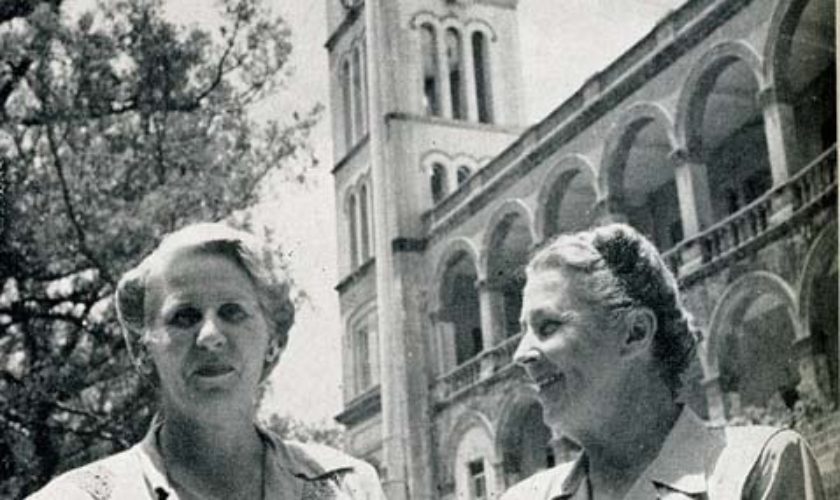 Jessica Lewis
Jessica Lewis was the first Bermudian athlete to ever participate in the Paralympic Games. She made her debut at the London 2012 Paralympics. She is a highly competitive sprinter and usually competes in 400m and 800m sprints. Lewis continued her paralympic career at the Rio 2016 Paralympic Games, and after coming 4th in the in the women’s 100m T53 final at the 2019 World Championships in Dubai in 2019 she clinched her spot in the Paralympic Games in Tokyo this summer. Jessica was born with a rare disorder called Diastematomyelia that causes the spine to split in two. As a result, she is completely paralyzed from the waist down. She received her first wheelchair when she was only 19 months old and in her own words: ‘the rest was history’. Lewis credits Windreach, which held a sports expo for people with disabilities in 2006, with the introduction to her love affair with track. This is where she met her late coach Ken Thom who attended to represent Track and began mentoring her on her journey to the Paralympics. 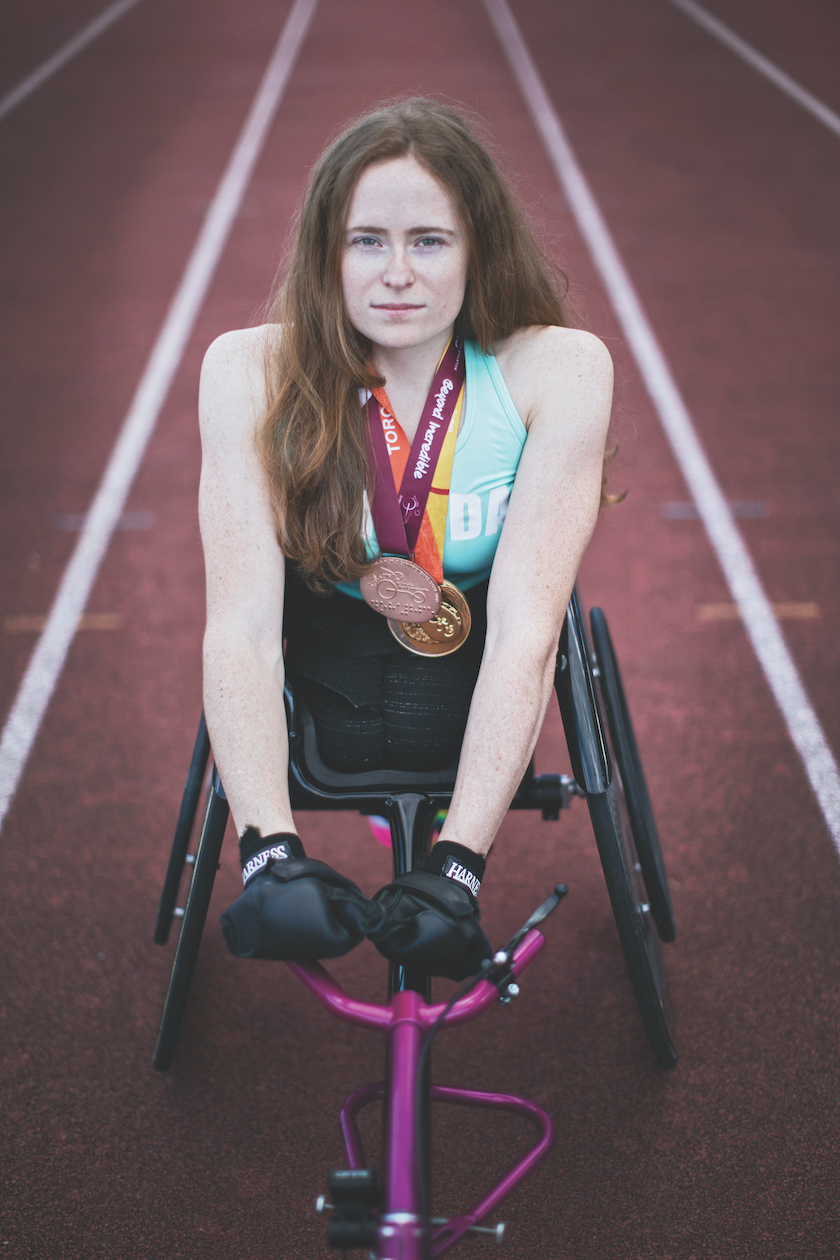 Shiona Turini
Shiona Turini is a household name across the world for her incredible eye for fashion. She has worked with some of the biggest names in the creative world and is a role model for young Bermudians who strive to achieve international success while shining their spotlight back onto our island. Turini is currently styling the fifth and final season of HBO show, Insecure, written by and staring her close friend Issa Rae and produced by 2 time Grammy-winner Melina Matsoukas. She has also recently been recognized by the Costume Designer’s Guild for her work in the poignant film about Black love and life in America, Queen & Slim. She has also worked for both Beyonce and Solange, as a stylist in Beyoncé’s iconic Formation video and collaborated on Solange’s visuals for Don’t Touch My Hair. Turini is the mastermind behind the iconic pink Nadine Goepfert jacket worn by Solange in her ‘Cranes in the Sky’ Video. Shiona also collaborated with Barbie to create a series of dolls celebrating black beauty in all shapes and sizes and creating representation for young girls everywhere. Shiona often uses her platform to bring attention to her small island home: most recently shouting out local Bermudian brand Salt Spray Soap Co. in a New York Times supplement called The T List, she has also filmed a major campaign for luxury skincare brand La Mer on island. 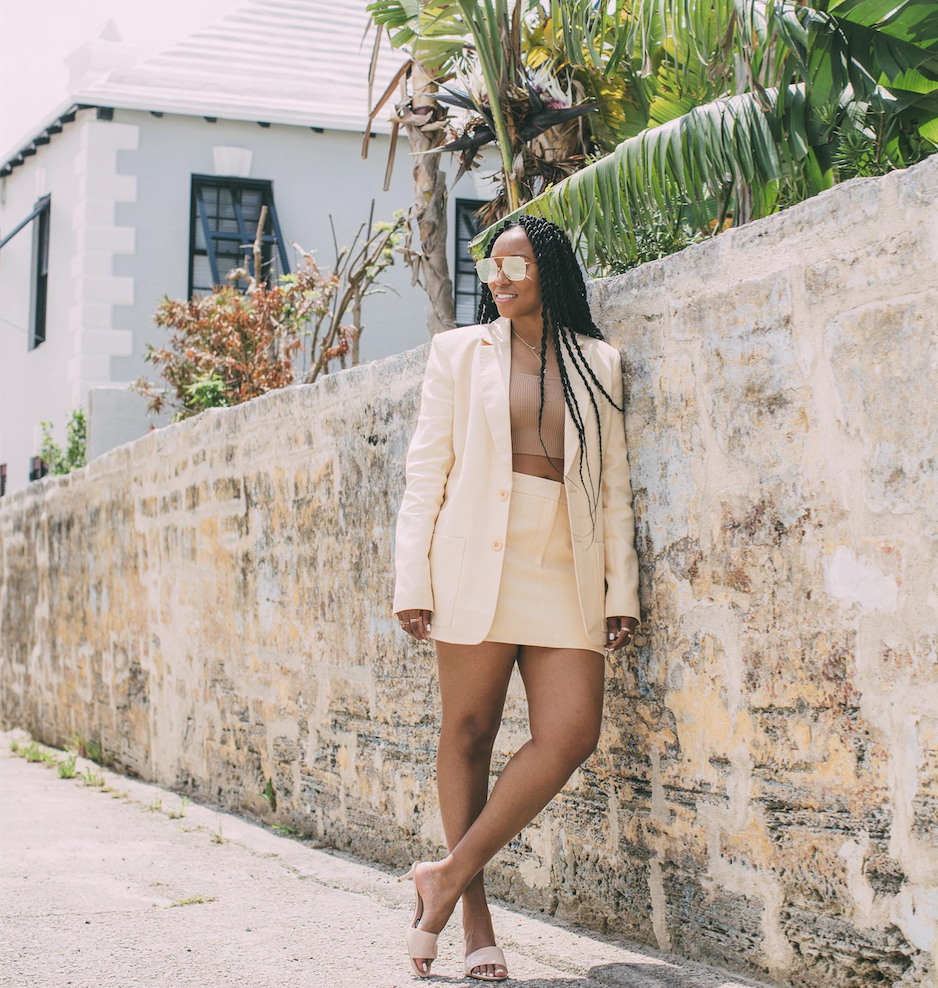 Mary Ewing Outerbridge
Mary Ewing Outerbridge is known for pioneering tennis in America, a game she picked up on a visit to Bermuda. Outerbridge was the seventh of ten children born to wealthy Bermudians Alexander Ewing Outerbridge and Laura C. Harvey, Mary was the first of the Outerbridge children to be born outside of the family home in Bermuda in 1852. The family moved to Staten Island at some point but they regularly return to Bermuda for vacations. On one of these trips in 1874, Mary picked up the game of tennis from British Naval officers, where the sport was adapted for outside play (it had been played for centuries in Europe and the Middle East mainly indoors). Outerbridge set up one of the first ever tennis courts in Staten Island in the 1870s. Outerbridge’s role in pioneering the sport in America could have played a major role in women demanding inclusion in tennis very early on. 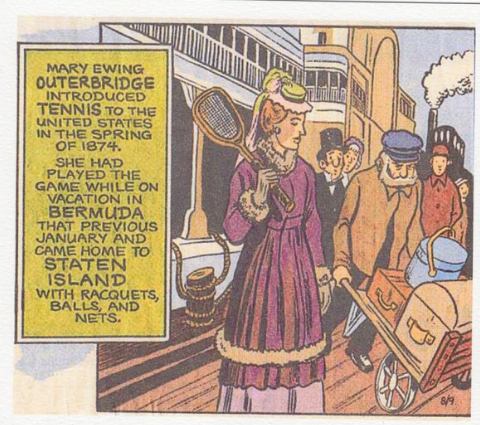 An illustration of Mary Ewing Outerbridge as it appeared in the book “Big Apple Almanac.”