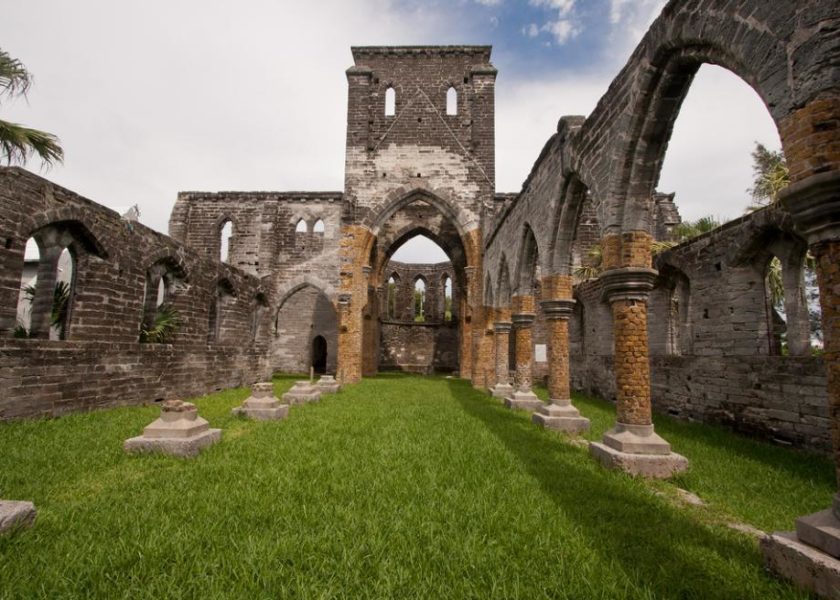 4 Historical Facts About The Unfinished Church

Despite Bermuda’s quaint size, it is home to the highest number of churches per capita in the world, and one of them is highly adorned for being beautifully incomplete. Located within UNESCO World Heritage Site, St. George’s, The Unfinished Church has been a centerpiece of gothic architecture and visitor curiosity for many years. Here are 4 facts you should know about this fascinating roofless relic known locally as the “Folly of St. George’s”.

1. In 1869, St. Peter’s Church, which served the East End community of St. George’s, was in a concerning state of disrepair after a storm damaged the property. Soon after, the present Governor offered the land of the Old Government House to build a new church out of fear that demolishing St. Peter’s might spread disease in the community from the yellow fever victims that were laid to rest in the graveyard. With the residents of the parish in agreement, construction began in 1874 on the new church but progress was slowed by a series of unfortunate turns. A divide emerged between the Anglo-Catholic and Protestant members of the community over conflicting opinions and a lack of finances, leaving the church in abandonment. The half-built stone structure was left idle to weather the test of time, and in 1926 it suffered hurricane damage. Some locals believe there to be a cursed fate that prevented the church from ever seeing its completion.

2. The lead architect that was sourced to see through the design of the church, was William Hay of Edinburgh. His specialism in gothic architecture led him on many international travels, of which included Bermuda. His most celebrated structure is the Bermuda Cathedral in the City of Hamilton which was designed in 1885. Parts of The Unfinished Church that remain intact are reminiscent of the Victorian era and Hay’s immaculate eye for detail which can similarly be observed throughout the Hamilton Cathedral.

3. In 1992, the Unfinished Church was declared a protected historical monument by the Bermuda National Trust. Unfortunately, the interior of the church is not open to the public, but it is still a great photo opportunity to tick off the list when visiting St. George’s. You may even be able to peer through the empty stone archways that should have once housed stained glass windows for a glimpse inside.

4. The Unfinished Church offers a dramatic backdrop for those looking to tie the knot in Bermuda and is one of the islands most sought out event venues due to its archaic charm. The site can accommodate up to 200 guests and promises a magical experience like no other. Its structural stone arches are met with a grassy floor below and opens up to a blue sky above in the daytime, or a fairytale starry night in the evening.