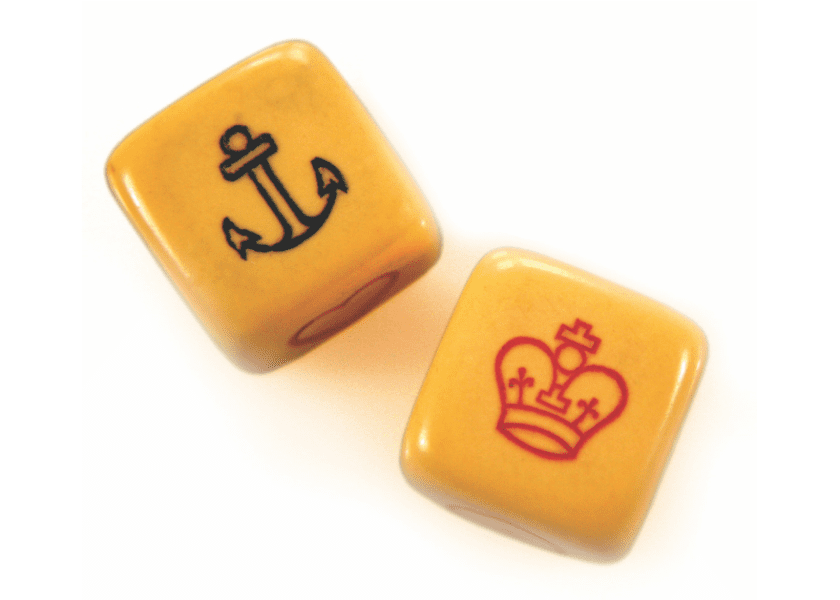 How do we love thee, Bermuda? Let us count the ways. These 5 cultural to reasons to love our island were taken from “37 Reasons to Love Bermuda” which featured in our Winter 2018 issue.

The Gombeys
An intrinsic element of Bermudian culture with a deep history, Gombeys can be heard on various occasions but especially on public holidays, such as Boxing Day. Those who live near their practicing areas can hear the whistles and the rhythm of the drums as the Gombeys rehearse. For more about the Gombeys’ cultural significance, read Peter Backeberg’s Freedom Movement: The Bermuda Gombeys.

Crown & Anchor by W.C. Stevenson
Cup Match’s biggest attraction might be the cricket, but Crown and Anchor comes in a close second. The sound of “Up she comes!” is music to Bermudian ears—a true siren song beckoning you to try your luck at winning a small fortune.

The game is a simple one invented by sailors in the Royal Navy. Three dice marked with six symbols—crown, anchor, diamond, spade, club and heart—are rolled by the banker onto a table marked with the same six symbols. Before the dice are rolled, players place their bets on their desired symbols. If your bet comes up on one or more of the dice, you win back your stake and the same amount for each die showing the symbol you bet on.

As with most gambling, you’re working with the odds heavily stacked against you, so only the foolhardy go in with actual dreams of winning big. If you’re smart you’ll keep your bets small and drink the free beer stocked beneath the tables.

If you really want to make yourself some tax-free cash, there is one strategy that the diehard fans among us swear by. The only surefire way to come out on top in Crown and Anchor is to keep betting double the amount you lose. If you lose $5, bet $10 the next time. If you lose $10, bet $20, and so on. Unfortunately this only works if you’ve got a seriously loaded wallet, because there’s no telling how long it will take for you to wind back up on top.

At the end of the day, tales of our luck or woe at the Crown and Anchor table are just as popular as recountings of the cricket.

Good Friday by Elizabeth Jones
You have to love Bermuda because it has to be the only country in the world where you get to have a good time on Good Friday. That’s not because the significance of the day is ignored. On the contrary, the churches islandwide are filled with congregations commemorating the Passion of Christ.

But for children, especially, the day means flying kites, the construction of which is symbolic of the crucifixion. According to local legend, a Sunday school teacher decided to demonstrate Christ’s ascension to heaven by creating and flying a kite which included crossed sticks to represent Christ’s cross. And so ever since on Good Friday, kites can be seen and heard fluttering and humming all over Bermuda, particularly on the south shore’s Horseshoe Bay where the annual Kite Festival is held.

In recent years many of the kites are bought but there are still significant numbers of homemade ones. Kite makers today create hexagon- or octagon-shaped kites with pine sticks and sheets of coloured tissue paper, adding hummers and tails made out of bed sheets cut into strips. The results can be aesthetically beautiful. However, older Bermudians remember a more frugal time when they used old brown paper bags and fennel sticks to craft the kites, the only constants between old and new materials being the sheet strips and the string used for launching.

Another important part of the Good Friday public holiday is food. As is common elsewhere, hot cross buns are served and fish is the order of the day. (It’s bad luck, by the way, for fishermen to go to sea on Good Friday.) But the Bermudian twist is that fish is most often served in the form of homemade codfish cakes placed inside the buns, often accompanied by banana, hardboiled eggs and baked beans cooked with chopped bacon, chopped onion and molasses or ketchup. The fishcakes themselves are basically made with a mixture of salted codfish, cooked after being soaked in water overnight, mashed potato, chopped onion and parsley, and thyme. However, the ratio of potato to fish and the addition of other ingredients such as chopped bacon, celery or curry powder can cause local debate, though everyone agrees thyme is vital. The mixture, bound by a beaten egg, is formed into cakes which are then coated with flour and fried in oil until golden brown. Quantities of white wine for the adults help the fare go down. Dark ’n Stormys don’t hurt, either.

Bermuda Rig Sailboats from Competing Yacht Clubs Still Race by W.C. Stevenson
For the unfamiliar, fitted dinghy racing might look more like a competition to see who sinks last rather than an actual sailing regatta. You’d never guess from looking at them that these masterpieces in impracticality represent the origins of modern sailboat design. The rigging found on our fitted dinghies is Bermuda’s most lasting contribution to the world—the Bermuda rig—an influence found on the majority of sailboats worldwide.
The origins of the Bermuda rig date back to the early1600s when a Dutch-born shipwright on the island started producing ships based on a popular design from his home in the Netherlands. He used a triangular sail that ran to the aft of the boat, hoisted to the top of the mast and attached at the base. Just imagine a fitted dinghy except way, way bigger. The result was the Bermuda sloop, a ship that was faster and more manoeuvrable than any other on the water. The Dutchman was soon employed by Bermuda’s governor, and shipwrights across the island were forced to emulate his design to stay in business. A poem by John H. Hardie published in 1671 described their prowess:
With tripple corner’d Sayls they always float,
About the Islands, in the world there are,
None in all points that may with them compare.”
Over the years the design would be tweaked and refined into the modern image of a sailboat we see today, but the original Bermuda rig can still be found on our fitted dinghies.
Naturally, with such marvelous ships at their disposal, it didn’t take very long before officers stationed at the Royal Naval Dockyard and the Army garrison began racing each other. The ships and their crews would be hired on weekends and before long sloop racing became one of the most popular sports on the island.
By the late 1800s, racing in such large ships that required professional crews to sail them was proving far too expensive for the sport to remain relevant, and on August 28, 1880, dinghy racing was born. The rules were a bit different than they are today. The first races involved several different types of dinghies in separate classes, but all were raced by amateur crews. Two years later the Hamilton Amateur Dinghy Association was formed—later named the Royal Hamilton Amateur Dinghy Club. A year later, HRH Princess Louise, daughter of Queen Victoria, visited the island and donated a trophy that would be awarded to the winner of a dinghy race open to club members that March. Soon after, a purse race was held that was open to all amateurs, with boats restricted to the current fitted dinghy specification.
Today, fitted dinghies are raced between the Royal Bermuda Yacht Club, the Royal Hamilton Amateur Dinghy Club, the St. George’s Dinghy and Sports Club, and Sandys Boat Club. You can find races throughout the summer in various locations around the island, racing windward/leeward courses with an upwind finish. It’s a truly unique sight—you certainly won’t find crew members diving out of their boats in any other regatta—and one that all Bermudians should witness.

A Cricket Game Is a Four Day Holiday by W.C. Stevenson
Sure, cricket enjoys a fan base of around 2.5 billion people around the world. Sure, plenty of countries suffer from cricket mania. But nobody does it quite like we do. For two days the entire island ventures forth to drink, gamble and generally act the fool in honour of our island’s longest and greatest sporting tradition.

The first cricket game was played in Bermuda in 1846 between British soldiers in St. George’s and Royal Navy sailors stationed in Dockyard. The game quickly caught on with the local black population who found myriad ways to play despite lacking the proper equipment.

At some point in the late 1800s—nobody really knows when—the St. George’s and Somerset clubhouses of the Grand United Order of Oddfellows—associations formed by black Bermudians in the face of segregation—began holding cricket matches as part of an annual picnic in celebration of Emancipation Day. It was a friendly affair at first, but year after year it only grew in popularity until cricket was the primary focus of the day’s festivities.

A first-hand account of the atmosphere during these days was recorded by local writer Nellie Musson, who described the transition from an informal game to a proper competition.

“The women cooked the food and served lunches. This included the Emancipation Day special of roast duck and rice pudding with added portions of carrot bread and baked pumpkin or pumpkin stew. Homemade soft drinks which were served unsparingly included ginger beer and root beer.

“Everyone enjoyed the outing so very much that the idea for an annual cricket game was formed. The popularity of the game grew and became a two-day event. Women followed the men, taking their entire families and sometimes staying overnight, sleeping in carriages, trolley carts, and makeshift tents.”

The first official Cup Match would eventually be held in 1902, where all-black teams from the St. George’s and Somerset cricket clubs put together a prize purse and purchased a silver cup. But Cup Match’s designation as a national holiday was still a long way away.
Despite this, black Bermudians took the Thursday and Friday of Cup Match off anyway—a tradition that began long before the competition itself came around. With the addition of the annual cricket match, Emancipation Day and Cup Match became one and the same. It wasn’t until 1946 that the government finally gave up and formally declared Cup Match and Emancipation Day a national two-day holiday.

During its formative years, Cup Match was always at the home field of the current victors. That was later changed so that the Cup holders could only host for two years in a row, before it was eventually decided that the venue should alternate on a yearly basis.