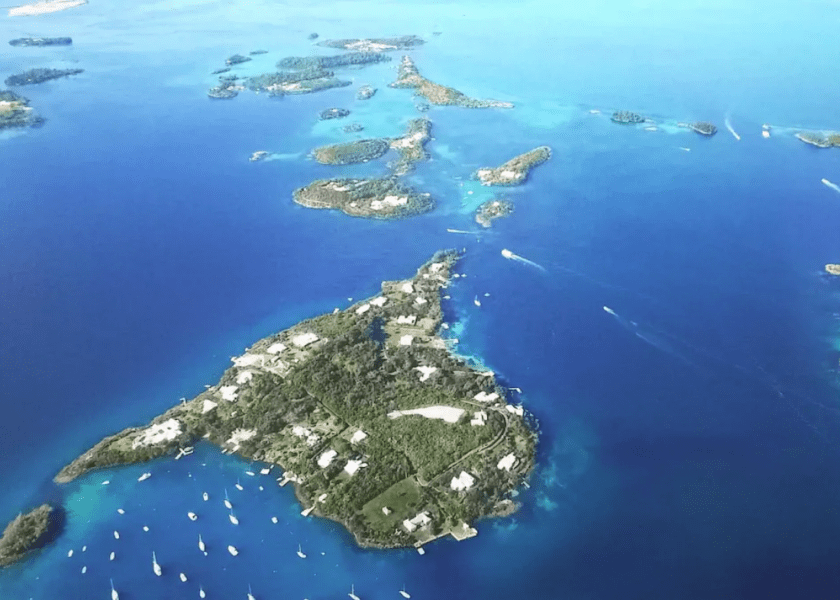 Located in the Great Sound, Hinson’s is a small residential island with an interesting past. Here are 5 facts about Hinson’s you probably don’t already know.

1. The name of the residential island has changed over the centuries. The name was rendered as Durrell in the census taken by Richard Norwood between 1662-1663, the island is called Durrell’s but it also has been referred to as Godet’s and Brown’s Island.

2. The island was named after Captain Hinson who purchased the island in the 1800s and built his home there. After his wife’s passing, he lived as a hermit on the island into his old age, growing food on his little farm. When in residence there, Hinson believed that the Rope Walk (which is still there to this day) was already at least a century old.

3. The Admiralty either purchased or leased the island at the turn of the 20th  century. At the time, the Admiralty Islands in the Great Sound were being used as part of the prisoner-of-war camp during the Second Boer War. On the 8th of March, 1902, Hinson’s Island was declared a military zone and a boarding school was erected, with younger prisoners-of-war educated there.

4. In 1919 Major Henry Hamilton Kitchener purchased Hinson’s Island. He had served as a pilot in the Royal Flying Corps during the First World War, becoming part of the new Royal Air Force on the 1st of April, 1918. He built his home on the highest point of the island and named it “Ad Astra” from the motto of the Royal Air Force.

5. While living on the island, Kitchener founded the Bermuda and West Atlantic Aviation Company and used Hinson’s island as the base, building two wooded framed hangers and a slipway with rails. He operated aerial tours of the island: The Short Flight was only 10 minutes long and took passengers to Gibb’s Hill Lighthouse then back to Hinson’s Island; The Middle Tour was 20 minutes long and flew passengers over Spanish Point and North Shore; The Grand Tour gave passengers an overhead tour of most of Bermuda, including South Shore. Sadly Major Kitchener’s the business didn’t survive for long and Bermudians had to wait 17 more years before they could fly again. The slips are still visible on the shore of Hinson’s Island, roughly 500 yards to the West-North-West.