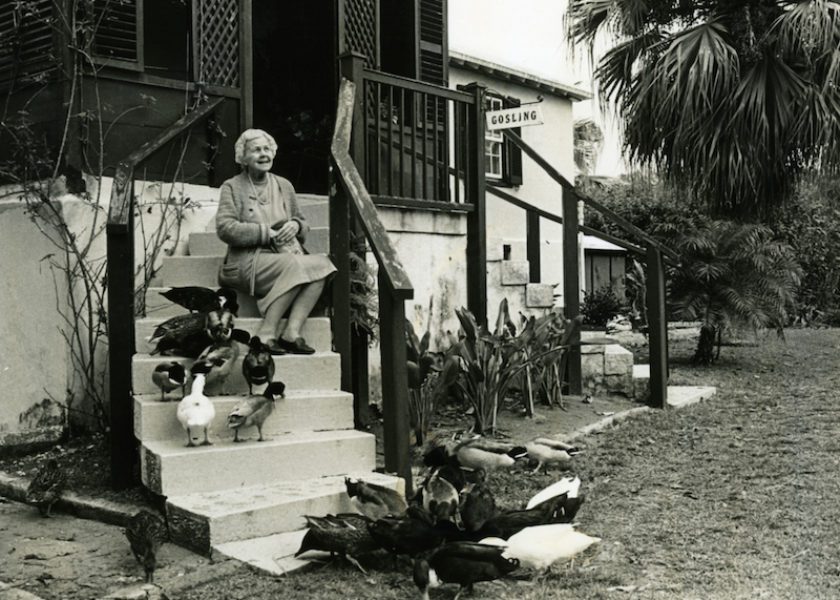 Miss Elsie Gosling, descendant of the Triminghams, lived in Waterville for some 20 years until her death in 1990. Here she sits in characteristic pose feeding the ducks on the curved 19th century steps. Bermuda National Trust Collection.

Thanks to the location of Bermuda’s hospital, most of us can say that we were born in Paget, but how much do we really know about the small central parish?

1. Paget was named after William Paget, 4th Baron Paget of Beaudesert. His father was a Catholic, but was stripped of his title after England became a Protestant state thanks to King Henry VIII. William, however, was a Protestant, and he maintained his title despite his father’s Catholicism. William worked as an “adventurer” with the Virginia Company, which helped discover Bermuda while on their way to Jamestown, Virginia.

2. The Pollockshields ran aground just off Elbow Beach during a hurricane in 1915. As the ship began to sink, Bermudian whaler, Antonio Marshall got in his rowboat and began to make his way out to the ship to help rescue the crew. While this happened, guests staying at the Elbow Beach Hotel watched with bated breath as the dramatic rescue took place. Sadly, the only person unable to be rescued was the captain of the ship who died while attempting to secure a life jacket.

3. Before 1625, Bermudians tried their hand at harvesting salt. As part of the process, water from the ocean was collected and left for long periods to evaporate. The hope was that the water would fully evaporate, leaving behind the salt which would be sold… but it didn’t exactly work out that way – turns out, Bermuda’s high humidity prevented the salt from ever drying completely. That didn’t stop some though, who travelled to the Turks Islands to farm salt there, taking with them enslaved persons. To read a real-life account of slavery in Bermuda and in particular, what it was like to be forced to painfully farm salt in the Turks Islands, read “The History of Mary Prince, a West Indian Slave” available for purchase from any local bookstore.

4. Waterville, built sometime in the 1720s, was the birthplace of Trimingham Brothers. As the historic home borders Hamilton Harbour, ships used to pull up right alongside it and offload Trimingham’s cargo into the spacious storage basement of Waterville. The beautiful home, now the headquarters for the Bermuda National Trust was also once used for shipbuilding and an unfinished ship once took up residence on the property.

5. The Botanical Gardens have been open to the public since 1898. Located on the property is Camden House the official residence of the Premier, although no Premier has ever actually lived there, it’s mainly used for offical government functions.

When Former Mayor of Hamilton, Henry James Tucker owned Camden, he processed arrowroot in a factory behind the house — the space is now occupied by Masterworks Museum of Art. The cedar-paneled walls of Camden House are said to have been crafted from Bermuda Cedars collected from all nine parishes of Bermuda.