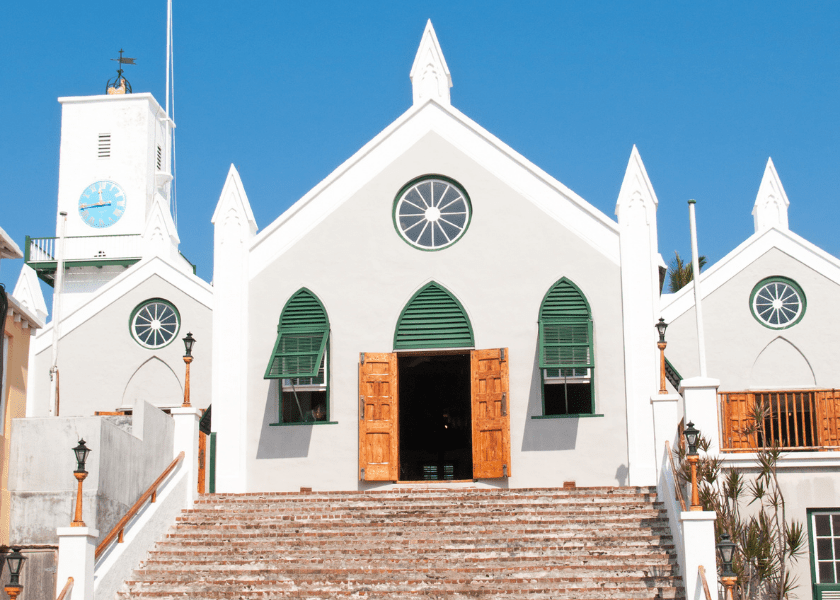 6 Reasons to Love Bermuda: The Places

How do we love thee, Bermuda? Let us count the ways. These 6 places to visit were taken from “37 Reasons to Love Bermuda” which featured in our Winter 2018 issue.


St. George’s or The Town of St. George by Elizabeth Jones
St. Georgians have long known their town is unique. That’s why few of them will consider leaving the old capital, let alone Bermuda. So while they appreciated the honour, they were not surprised when St. George’s, together with its related fortifications, was designated in the year 2000 a UNESCO World Heritage Site for its “outstanding universal value.” Founded in 1612, the oldest English speaking colonial town still in existence, St. George’s has literally cast Bermuda’s cultural history into stone, the town, contrasting today with the modern metropolis the City of Hamilton has become. The rough tracks trodden by the first settlers slowly became the quaint, walled winding lanes we know today, so quiet at night you can hear the patter of footsteps, the creaking of bamboo and the rustle of palmetto. At the same time, the first palmetto-thatched dwellings of the seventeenth century gave way to eighteenth-century residences and St. Peter’s Church, built out of hand-quarried Bermuda stone and famous for their architectural simplicity. Today, St. George’s buildings continue to delight us with their white stepped bumpy roofs, pastel walls and enormous chimneys. So do the town’s gardens, both private and public, tucked away in nooks and crannies, hidden behind walls and edged by stone steps. Even the place names bring back the past. Many are dubbed after royalty, thanks to an ardent royalist mayor, the Worshipful John Van Norden, who in 1818 began the trend by naming streets after the reigning King George III, his wife and his children. And so we have King’s Square, Princess Street, Queen Street, Duke of Clarence Street and Duke of York Street. Other names are more picturesque. Silk Alley or Petticoat Lane off Queen Street, for example, commemorates two girls, whose silk underskirts swished as they walked to church for the first Emancipation Day service, August 1, 1834. Featherbed Alley is named after a goose-down mattress, a luxury household item for the wealthiest townsfolk in the colony’s early days. Apparently, a wife living on the alley had a quarrel with her husband and threw him out. Happily, Bermuda’s balmy climate allowed him an easy solution. He took their mattress out of the house so he could comfortably sleep on the street, thus adding to the many stories we love to discover in the alleys and lanes of old St. George’s.


Graham Foster’s History Lesson in a Mural by Annabel Cooper
If a picture is worth a thousand words, I wonder how many trees could have been saved if all the world’s historians were as creative and talented as Graham Foster—not to mention how many more of us might study the subject! Hidden away in a stairwell of the Commissioner’s House in Dockyard, is Bermuda’s answer to the Bayeux Tapestry and Sistine Chapel: The Hall of History. In just one thousand square feet, Foster illustrates five centuries of Bermudian history—shipwrecks, settlers, capital punishment and the horrific slave trade flow into oceanic discoveries, architectural development, political events, the arrival of tourists and the advance of modern transportation and international business. All this via depictions of folklore and tradition. The mural took an astonishing seven thousand hours to complete and was officially opened by Her Majesty the Queen in November 2009. Thanks to Foster, there is no need for any of us to sit and study pages and pages of tiny black text to learn how our colourful island came to be what it is today. And that’s another thing… the colours!


The View from the Lighthouse by Annabel Cooper
There are views and there are views, and in Bermuda we are spoilt for choice. If you are prepared to climb the 185 steps to the top of Gibbs Hill Lighthouse however, you will, once you have caught your breath, be able to enjoy a view of virtually the entire island in all its glory. The lighthouse, which is one of the few in the world made from cast iron, began beaming its light on May 1, 1846. The beam can be seen by ships 40 miles away and has saved many vessels from wreckage in the 172 years that it has been in operation.


The Aquarium (BAMZ) by Annabel Cooper
Bermuda’s Aquarium, Museum & Zoo has an impressive variety of land and ocean species; after all, how many other small island nations are home to two Galapagos tortoises? You can also admire large and small turtles, seals, flamingos, an alligator (when he deigns to come up onto the land) and hundreds of other birds and animals from all over the world. The Museum has fascinating exhibitions about the island’s natural history, and there’s a children’s playground and a café with unrivalled views of Harrington Sound. My personal favourite, particularly during a hot summer’s day, is to wander the air-conditioned halls of the fish tanks admiring the crazy looking lionfish and the reef shark that hangs out in the North Rock tank at the end.For fun on the water, BAMZ has its own boat, RV Endurance, captained by the extremely knowledgeable Nigel Pollard who can take you whale watching, for a glow worm sighting, snorkelling or just a simple cruise. Look a little further, however, and you realise that BAMZ, and its support charity The Bermuda Zoological Society, is not just a fun day out for all the family. It’s a vital educational resource that is also responsible for some of the restoration and conservation of Bermuda’s land and ocean, and the animal, bird and aquatic species that live there. It is home to sick and injured turtles, and the Bermuda Turtle Project has captured, tagged and released over 3,500 endangered green turtles as part of its mission to conserve them through research and education. Other such projects include those for the humpback whale, toad, shark, cahow and Bermuda’s reef system in general. There are also outstanding educational programmes for children, as young as four years old, which make me green with envy when I think how unexciting my lessons were in a boring old school classroom. My young children have fed turtles, touched snakes, think David Wingate is a hero and pick up every single little piece of plastic they find on the ground.

Golf Courses by Annabel Cooper
You can’t fail to impress your golf-loving guests with a round on one of Bermuda’s above-par courses. Amazingly, our tiny, densely populated island is home to no less than seven pristine golf courses. In addition to the beautifully kept greens, there is usually an equally beautiful ocean view your opponent is so busy admiring they’re bound not to notice you hacking up the ground, missing completely or giving your ball an extra “nudge”!


Swizzle Inn by W.C. Stevenson
The legendary Swizzle Inn—home of our national drink, the rum swizzle—is Bermuda’s oldest and most iconic watering hole. Opened in 1932 in a seventeenth-century roadhouse, the pub has been an east end staple for more than 80 years. The guest book even dates back to 1942. Besides providing locals with pub grub and beer, the Swizzle is also the last stop many make before leaving the island and the first stop for those who have just arrived.  The pub has been a family-owned business since husband and wife Johnny and Jackie Correia took over in the early ’60s. The pub’s restaurant was added a decade or so later, followed by the second storey and a gift shop in the early ’90s, after their son Jay took the reins. Through it all the Swizzle’s atmosphere still exudes that mom-and-pop vibe. It’s a proper old-fashioned pub in a world where old-fashioned pubs have become, well… old-fashioned. It’s hard to overstate just how big of a staple the Swizzle Inn is for the island. We’ve developed entire traditions around the drink they’ve invented, and done our damnedest to adhere to the pub’s motto whenever we visit—Swizzle Inn, Swagger Out. Perhaps the greatest indication of the Swizzle’s importance is the fact that every now and then, somewhere out in the world, you’ll spot someone wearing one of the popular T-shirts sold in the gift shop.