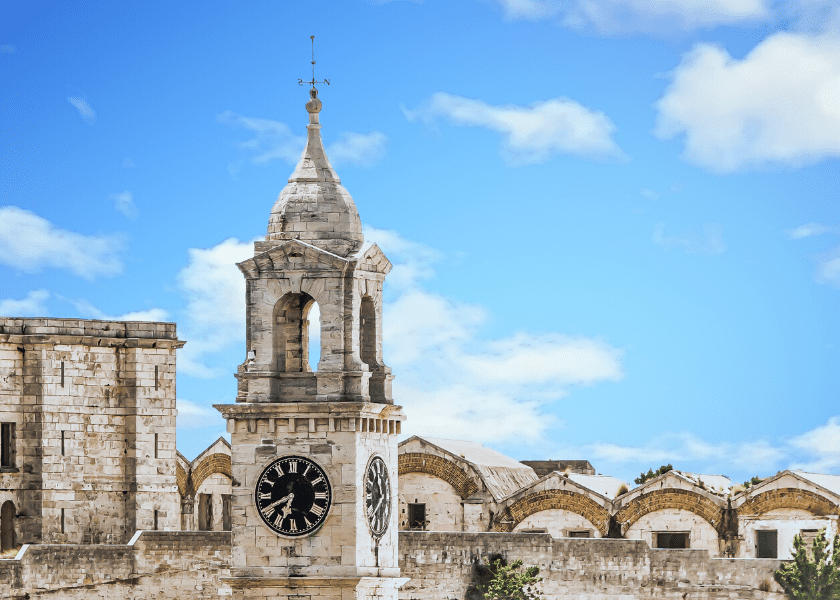 8 of the Most Iconic Places in Bermuda to Visit

When visiting Bermuda, it’s important to take in all of the most important and iconic spots. Do you think we covered them all?

1. The Town of St. George
St. George’s is where the story of Bermuda’s settlement began. When survivors of the Sea Venture shipwreck came to shore at the eastern end of the island, they named it St. George after the patron saint of England. Later, the same name was given to the town that from 1612 to 1815 was Bermuda’s capital. Since the year 2000, the Town of St. George, the oldest continuously inhabited English-speaking town on this side of the Atlantic, has deservedly been designated a UNESCO World Heritage Site for its “outstanding universal value.”

2. Horseshoe Bay
Hailed as one of the most Instagrammed beaches in the world, Horseshoe Bay is loved for it’s soft pink sand and it’s shallow, blue waters. Fortressed by steep cliffs on one side, visitors to the beach often make the daring climb up to capture the beach from the highest possible vantage point.

3. Front Street
What’s not to love about a waterfront high street where even the public bathrooms are adorned with a floral mural and Bermuda flag? It has wonderful quirks, including the Bird Cage, and if you are stuck behind a car that randomly stopped in the middle of the road because its owner didn’t want to pull in or spotted someone they know, you can look across the harbour and count the number of pink and yellow houses overlooking Harbour Road.

4. Dockyard
The Royal Naval Dockyard on Ireland Island is one of Bermuda’s most popular attractions and is worth a whole day’s excursion. Its name and names of its roads and lanes – Freeport Road, Maritime Lane, Camber Road, for example – as well as its large buildings, constructed out of local stone by enslaved persons and after Emancipation by convicts, remind us that Bermuda was once the “Gibraltar of the West”. Today, Dockyard, as locals call it, has been transformed from a British naval centre into a bustling community, complete with a  marina, a shopping mall, restaurants and an authentic British pub, as well as a number of arts-related centers, pottery and glassworks studios and a craft market.

5. Bermuda’s African Diaspora Heritage Trail
60% of Bermudians have African ancestry, with many being the direct descendants of enslaved persons. Indeed, it’s impossible to learn about Bermuda’s history without learning about the 200 years in which our island played its role the trans-Atlantic slave trade. Explore Bermuda’s African Diaspora Heritage Trail and see where Bermuda’s history was made with stops at the statue of Sally Bassett, the home of Mary Prince, Pilot Darrell’s Square, and Jeffrey’s Cave at Spittal Pond, among others. Click here to learn more and plan your visit.

6. Gibbs Hill Lighthouse
Standing 362 feet above sea level, Gibb’s Hill Lighthouse is not tall by lighthouse standards, but who can deny that the view from the top is unrivaled? Shining light over the ocean in a 100-mile radius, the historic Southampton lighthouse has protected Bermuda’s coral reefs from shipwrecks for more than 165 years. Although no longer a key navigational tool to guide seafarers through Bermuda’s challenging network of reefs, Gibb’s Hill Lighthouse is a popular tourist attraction and a well-maintained historical site. Each year, around 25,000 pairs of feet climb their way to the top and look out at Bermuda in all her glory. It’s unclear how many of those feet are Bermudian, but we’re betting not enough. Take a Sunday afternoon, make the trek and take in Bermuda end-to-end. Trust us: the splendour of seeing such a beautiful sight from on high is enough to regenerate pride in being Bermudian.

7. Railway Trail
Once upon a time Bermuda was a quiet island. There was only one form of motorized transportation besides the motorcycle, and Old Rattle and Shake was her name. Built in 1931, the Bermuda Railway was the Bermuda government’s answer to providing mass transport for locals and visitors without cars disrupting the peace and quiet tourists had come here to find. For 17 years, Bermuda’s little train made dozens of trips per day from Somerset all the way to St. George’s, providing riders with the most exquisite views of the island. Sadly, due to low ridership, the Bermuda government shut the railway down in 1948. Fast-forward to 1984 when the government converted the old railway lines into picturesque trails for walkers, cyclists and horseback riders. Those who commit to travelling the entire trail will not be disappointed; the views take in the coastal shoreline, Bermuda’s stunning beaches and natural woodland with canopied paths.

8. Below the Surface of the Water
Local divers will insist that it is impossible to truly appreciate the beauty and splendor of Bermuda if you never take a peak beneath the surface. If you’re daring enough, get PADI certified and take in Bermuda’s reefs and wrecks from 60-feet-below. If you’re not a thrill seeker, rent or buy a mask, snorkel and a pair of fins and take in the small fish and colorful corals that inhabit the many small, shallow bays in and around our island.