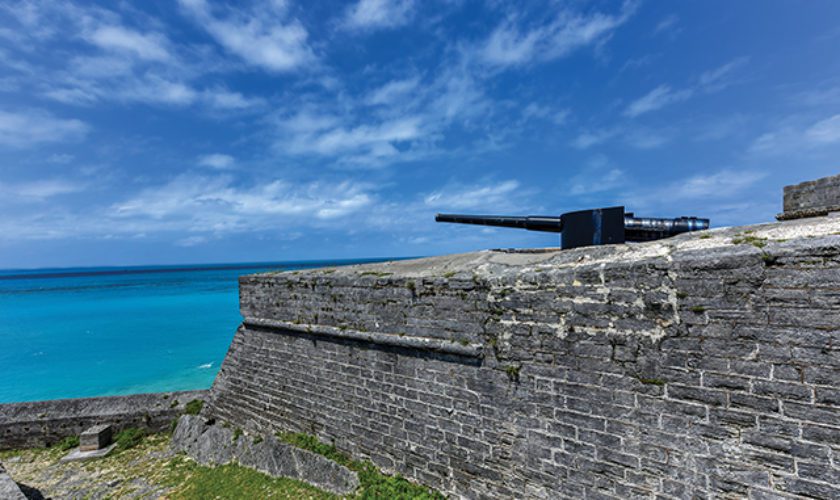 A Guide to Bermuda’s Best Forts

If you haven’t explored Bermuda’s forts lately, now’s the time to get reacquainted with a little bit of Bermuda’s history.

Alexandra Battery
This small fort is the perfect place to keep families with small children entertained all day. The fort has plenty of cannons and spaces to climb, and when you’ve explored all of it, you can lounge on the sandy shores of Buildings Bay Beach. This beach is famous for the colourful sea glass that washes up on its shores, as well as being the beach where the Deliverance is said to have been built by Sir George Somers after his original boat was wrecked on Bermuda’s reefs.

Fort St. Catherine
Fort St. Catherine is an interesting and out-of-the-way fort in St. George’s. The fort has a museum inside including antique weapons and old artillery. The fort also has paranormal history – an exorcism was held there in the 1970s. The beach below was where Sir George Somers and his crew first came ashore. Couples can explore the fort’s sprawling ramparts and take a dip in the clear water afterwards.

Fort Hamilton
Fort Hamilton is a very well preserved fort in the heart of the island. In addition, its moat is now a lush garden, and the upper levels of the fort hold various well-landscaped lawns. The fort’s basement is home to a maze of tunnels and rooms that used to be used for replenishing ammunition, and visitors can spend time descending into the belly of the fort and back up again.

Gate’s Fort
This cute little fort is one of the smallest in Bermuda, more of a lookout point than a fully-fledged defense outpost. The fort is basically one tower that is accessed by climbing up a charming wooden stepladder onto the platform. From here, visitors have a spectacular view of Town Cut, where many ships have passed through into St. Georges. As the fort is little known, visitors will have a wonderful time in comfortable solitude.

Admiralty House
Although not technically a fort, this site was once a house for admirals of the British Navy. In the cliffs, some rooms and windows have been carved out to create catacombs in the belly of the park. After cliff jumping from the low cliffs here, visitors can climb up through the catacombs and back into the park to jump again. Aside from the beaches and cliffs, the park also has a network of beautiful walking trails.

Fort Popple
This fort is located in the island’s east end, and can only be accessed after a long coastal walk. The walk takes visitors over farmland and rocky shorelines to reach the remains of the once handsome stronghold. Views out towards the open sea are sure to amaze those who make the climb.

Fort Cunningham
Not open to the public, this fort is commonly accessed by teenagers attending Outward Bound summer camps. During the camp, groups must navigate the fort in its pitch darkness and find the exit, while camp counselors scare participants with paranormal stories and sounds. This fort is extensive, well preserved, and one of the biggest in Bermuda. In the 1700s, prisoners of war were kept here.

Fort Scaur
Fort Scaur is built in the midst of beautifully preserved 22-acre grounds on the highest hilltop in Somerset. Though there are not many rooms in the fort, exploring the grounds and surrounding trails is an afternoon well spent, and there are many picnic spots on the flat courtyards inside the stronghold’s fortifications.