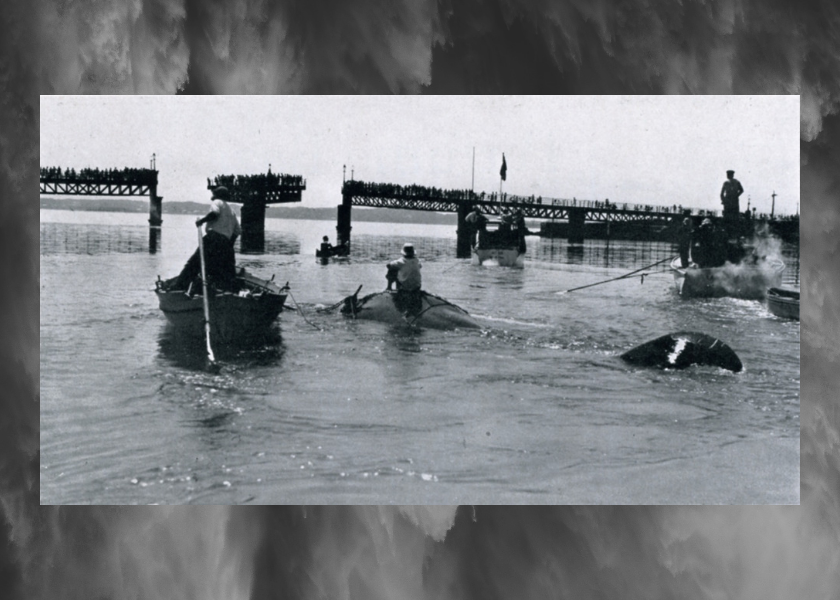 A History of Whaling in Bermuda

Whaling in Bermuda began in the 17th century, and, research reveals, it was an altogether improvised affair. In true Bermuda spirit, a historian notes “boat crews were treated to rum punch at the end of the day, regardless of whether they had brought in a whale.” Like many industries in Bermuda, whaling was on island time.

Early settlers excitedly reported an abundance of whales, “which nobody knew how to hunt,” to the Bermuda Company. They greatly exaggerated the riches found in Bermuda’s waters, going so far as to completely fabricate the fact that pearls were to be found here. In this way, the island might attract more investors and shipments. They just had to solve the small problem of actually extracting valuable products from the whales.

Perhaps some of the small company that was wrecked on Bermuda from the Sea Venture decided that they would rather take their chances here than risk their lives in Virginia, where they knew New World colonists were starving. It is known that two men stayed behind, opting not to continue on to Virginia in the Deliverance, made from the Sea Venture’s salvaged parts.

Discovery of Ambergris
Ambergris was found on our shores, that much is true – Silverster Jourdain records “some good quantity of Amber Greece, and that of the best sort.” This is a foul-smelling substance made in the intestines of sperm whales, which floats on the surface of the water and which has historically been used in luxury perfume and cosmetics. In the early 1600s, one of the men who stayed in Bermuda from the Sea Venture’s wreck found a piece of ambergris valued to about £9000 at the time.

The man, Edward Chard, hatched a scheme to make Bermuda appear more fruitful in ambergris than it really was. Instead of selling it all at once, he broke it in to smaller parts, shipping it to London in installments to give the impression of regular ambergris deposits. His plan worked: enticed by promises of untold riches in ambergris, the Virginia Company invested £2000 in the island colony.

However, this expensive clump was the only substantial amount of ambergris that would be found on Bermuda’s shores.

Why are Whales so Valuable?
Ambergris and spermaceti were without doubt the most valuable whale products at the time, and were both found in the bodies of sperm whales. Bermudians focused mainly on oil rather than these products, however, and caught a few different species of whale. That’s not to say that ambergris couldn’t wash ashore, however.

In Moby Dick, spermaceti is characterised as a very fine and sweet substance, and Ishmael characterises it as brilliant and heavenly, saying, “In thoughts of the visions of the night, I saw long rows of angels in paradise, each with his hands in a jar of spermaceti.” It was used to make exquisite cosmetics and pomades, usually for the very wealthy classes.

One adult whale could yield up to a thousand gallons of oil, which fetched a hefty price overseas. This oil was used to light lamps, and thousands of gallons of the oil were exported over the island’s whaling years, after domestic lighting needs were satisfied.

Whale Species in Bermuda
Most species the early settlers saw in Bermuda, as reported by Jarvis, were right whales, orcas, trunks (sperm whales) and humpbacks. Today, humpback whales still migrate past the island in huge numbers, but right whale numbers have reduced dramatically due to whaling, so are no longer seen. Orcas largely escaped human hunting because of their poor oil payoff, but are no longer commonly found around Bermuda. As for sperm whales, we occasionally get strandings, but their numbers too have been decimated.

Attempting Whaling
The island was officially colonised with a further 50 settlers, along with the first governor, Richard Moore, in 1612. It is recorded that Bermudians have attempted whaling since 1616, however, early missions were unsuccessful due to sheer incompetence. Richard Norwood, who kept many records about his time in Bermuda, writes:

[the whalers] strucke some, but found them so lively, swift, and fierce after they were stricken that they could take none.”

Bermudians knew the whaling season – January to April was when most whales passed our shores, but catching them proved to be a problem. In a 1617 letter, one of the first ministers of Bermuda writes,

[I] hope that God will teach us how to take some whales.”

It’s no surprise that Bermudians had such trouble harvesting the whales – they did not have the skills or technology capable of taking down such a large animal at the time.

Whaling Successes
It wouldn’t be until the 1660s that Bermudians learned to hunt whales effectively. It is likely that Bermudians only came to conduct successful hunts because they learned to target mother-calf pairs. The hunters could more easily take a small calf, and later take the mother who would not leave her calf’s side, using this pair bonding to their advantage.

In 1664, eighteen whales were captured in the whaling season, and an analysis of the description given of the whales suggests they were humpbacks, referred to with the word “jubatees.” “Jubarta” is the Spanish word for humpback whale, which is related to “lively,” reflecting their breaching behaviour. Historically, Basques were thought to be the real experts on whaling, so their species-specific language probably spread during early whaling missions and came to be used by non-Spanish speakers.

In the 1800s, the invention of the whale-gun allowed whaling to become much easier and less dangerous, with the success rate of captures much higher.

Illegal Whaling
In these early days, all whaling activities took place under the “The Adventures of Whale Fishing,” a subsidiary of the Bermuda Company, which was financially backed by primarily English and a few Bermudian investors. “Pirate whaling” by individuals not part of the company was strictly prohibited, and would incur fines and prison time. Of course, if individuals took the risk of conducting whaling missions themselves, they would get the full profit from their efforts. As a result, whaling activities mostly took place under the table at this time. 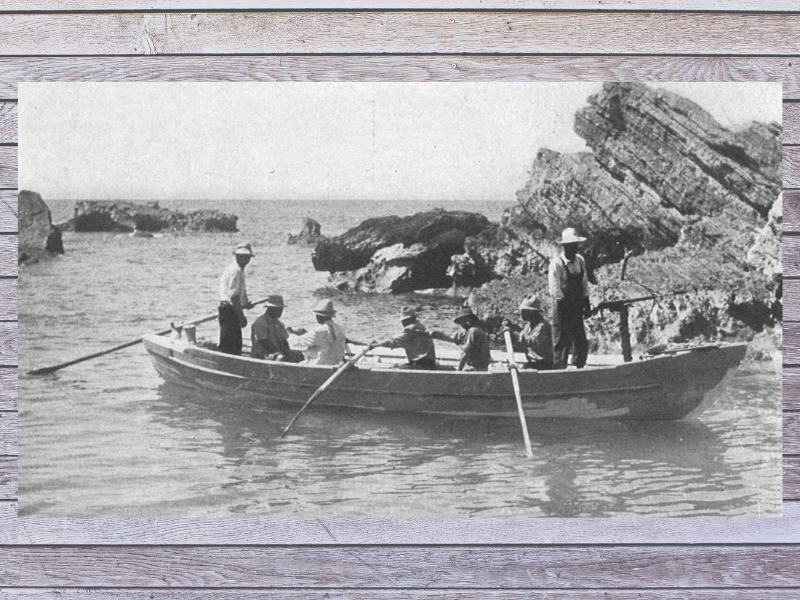 How Did they Catch Whales?
Eventually, restrictions on whaling relaxed, and competing west and east end companies emerged. When a whale was sighted, a race would commence between the two companies to harpoon the animal. From here, the whale was taken to the shore for processing, where the whale was raised on a winch and stripped.

Conch shells were used by lookouts on the shore to alert people of a whale sighting. Boats also had conch shells to announce the successful capture of a whale.

How were Whales Processed?
Blubber was boiled into oil at a try-works, and you can still see the whaling station on Smith’s Island today. Whale meat, called “sea beef” was given to the whaling boat crews. Traditionally, the meat was thought of as tough and undesirable, but according to an observer in 1828, “Bermudians have a method of cleansing it, which leaves no fishy flavour, and it is as tender as veal.”

After the oil was refined, the liquid had to be poured into cedar cistern casks, and the leftover parts disposed of.

Who Caught and Processed the Whales?
Multiracial crews, consisting of skilled black slaves and white sailors, were the norm for whaling missions. Slaves were usually in charge of rowing and steering the boat, and were paid two shillings, fourpence per day. Slave harpooners were paid only for the whales they killed, earning £2 per whale. The crew of 30 whalers consisted mostly of slaves, and often worked alongside their white masters.

A larger crew was required for processing the whale. A workforce consisting mostly of black males flensed the whale of blubber, and these pieces were further cut up to fit in to boiling pots. This grim work was carried out by slaves of all ages, and women were also recorded as taking part.

When Did Whaling End in Bermuda?
Whaling activities declined very much from the 1900s onwards, but a few whales were captured as late as 1940.

“Some St. David’s fishermen believe that whales were scared away from surrounding waters when warships began the custom of carrying out battle exercises in the area” reports a 1961 Bermudian article.

More Recent Whaling
Trained as a shipwright, Tommy Fox took up whaling in his early life, which seemed more exciting and more profitable. “His face is almost mahogany-hued from exposure to salt spray, strong suns, and high wind,” a 1940 Bermudian article proclaims. Some of his whaling tools were in the possession of the Bermuda Aquarium for display.

When a large sperm whale was captured, Tommy set out to prove that the story of Jonah and the whale could have taken place. He climbed in to the whale’s inert jaws, and fit himself into its belly. In doing so, he proved that the monster was capable of engulfing a man. However, Tommy conceded that in such a small space, breathing the same air would have caused Jonah to suffocate over the course of 3 days, calling this proof that Jonah’s survival was “a real Biblical miracle.”