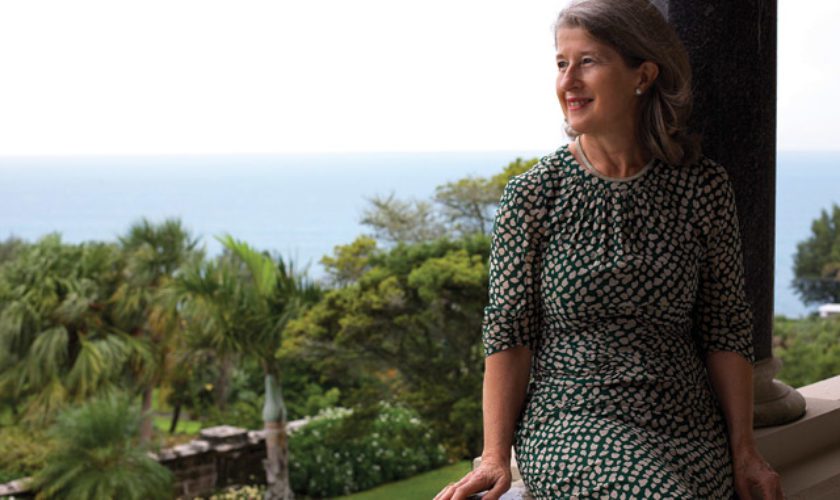 Seen from the air, as one aerial photograph reveals, the grounds of Government House constitute a reassuringly green expanse, their 33 acres stretching down from Marsh Folly Road to the north shore. The lawns and gardens alone would be enough to create a gracious setting, especially as they have become part of Bermuda’s community. The rose gardens, famous for their Bermuda mystery roses, are cared for by the Rose Society. More recently, Margaret Fergusson, wife of our present governor, has started a kitchen garden, with the aim of introducing children from three local primary schools to the pleasures of gardening. “I got the idea from Michelle Obama,” she says. “Everything grows so quickly in Bermuda, it’s encouraging.” She also sees it as a means of exposing the children to Bermuda’s social history—already they are planting the famous Bermuda onions. Next year she hopes they will grow Easter lilies.

However, the tree collection, which includes avenues of palms, cedars and frangipani, makes these grounds Bermuda’s first arboretum since some of the trees at Government House date back to the late nineteenth and early twentieth centuries. Because many have been planted by visiting royalty, presidents and dignitaries, they can be seen as living signatures in an official visitor’s book and for that reason are valued for their historical, as well as their botanical, significance.

Mrs. Fergusson is very aware of their importance as part of Bermuda’s heritage. That is why for the last two years she has headed a project to ensure information about them is current and correct. The problem with a living museum is that it’s even more subject to the vagaries of time, weather and mishap. A significant number of trees have been damaged or destroyed in hurricanes, particularly in the devastation wreaked by Hurricane Fabian in 2003 and more recently by Hurricane Fay in 2014. For example, a Cuban royal palm planted in 1928 by Prince George was uprooted during Hurricane Fay, its crown landing in the Government House tennis court.

Sometimes, damaged trees are replanted or replaced but not always in exactly the same position. To compound the problem, not all the trees’ labels are legible since the writing has been eroded or the plaques badly damaged. Other labels have been lost or misplaced. And some trees were never labelled at all. So, explains Mrs. Fergusson, the project was twofold. “We needed to know what trees we’ve got and then we needed to label them properly.” The new plaques, made of aluminium with white writing, will be more permanent than the most recent ones made in black plastic. Each identifies the tree or shrub, the person who planted it and the year, as well as the event it commemorates, if applicable.  She engaged the help of Alison Copeland and Mandy Shailer from the Department of Conservation, Lisa Greene from the Bermuda Natural History Museum, George Ogden, former horticulturist for the Hamilton Corporation, and Christine Watlington, author of Bermuda’s Botanical Wonderland, who all worked together to identify the trees, number them in chronological order and create an updated spreadsheet. The collection now consists of 150 trees, the last of which was planted in October 2013 by David Arkley, former deputy governor.

Mrs. Fergusson is also contemplating holding a competition for students to create the best phone app that visitors to the grounds could use to increase their knowledge. It could feature a GPS map of the trees and links to additional botanical and historical information. It could even provide a link to film footage of the tree plantings. Whether the app will happen or not, certainly the trees are intriguing for the stories they hint at. Their growth charts the passing of time, so that over the generations visitors viewing them have knowledge of events the planters could not even guess at. Take the first three trees listed on the spreadsheet, for example. All were planted by members of the British royal family. A mango (Mangifera indica) was planted by Prince George in April 1880 when, aged just 15, he visited Bermuda while serving on board HMS Bacchante. He actually visited Mount Langton which was home to the governor before the present Government House was completed on the site in 1892. The plaque tells us that he would later become King George V. But he would not have expected to succeed to the throne as he was not the eldest son. When he planted his tree, he was accompanied by his elder brother, heir apparent Prince Albert, who also planted a mango. Twelve years later Prince Albert died aged 28 in the influenza pandemic of 1891. Prince George duly ascended the throne in 1910. The tree outlasted Prince Albert since it was still growing in the 1940s but was later destroyed in a storm.

As coincidence would have it, the next tree listed was also planted by a Prince George, the youngest son of King George V. He planted a Cuban royal (Roystonea regia) in 1928. Later he became the Duke of Kent and in 1942 tragically lost his life in a military air crash in Scotland. His tree also outlived him by many years but, as previously mentioned, it was lost to Hurricane Fay in October 2014.

And the third tree? In 1940 the Duke of Windsor, formerly King Edward VIII, arrived in Bermuda in August en route to the Bahamas where he would take up the governorship. He and his wife, the Duchess of Windsor, can be seen on YouTube coming in to dock by the Royal Bermuda Yacht Club in Hamilton. The footage clearly shows his being greeted by one of the wives with a half-curtsy, and his wife (for whom he had abdicated the throne) with no curtsy at all.  Apparently, the duke was insulted by this omission (the protocol having been instructed from London). The footage follows them to Government House where they sit on a bench in the grounds either after or before planting (ironically perhaps?) a royal poinciana (Delonix regia). The tree is still standing.

Due to a back injury, President John F. Kennedy had to forgo any actual planting and instead snipped a ribbon tied around a Canary Island date palm during his visit to Government House in 1961.

The date on the plaque should give visitors pause for thought—in 1940 Britain was at war with Germany and in a state where a positive outcome could in no way be guaranteed. Two years later Winston Churchill would fly to Bermuda in the flying boat the Berwick to thank the island for sacrificing land for the American base. The choice of tree, Juniperus bermudiana, a cedar endemic to Bermuda and an important part of its history, is both fitting and touching.

A happier story is connected to a Japanese yew (Podocarpus macrophyllus) which was planted in 1953 by Elizabeth II, who arrived as a very young, newly crowned queen with her husband, the Duke of Edinburgh. To date she has been the only reigning British monarch to visit Bermuda. In 2016, the Queen will celebrate her 90th birthday, while in 2015 she became the longest reigning monarch. So the choice of tree was
appropriate since yews symbolise longevity. (Some can live for thousands of years.) Unfortunately, that yew tree did not survive, but the Duke of Edinburgh replaced it in 1994. The symbolism of the large-flowered magnolias planted by the Fergussons to celebrate the 60th anniversary of the Queen’s coronation is also appropriate as the magnolia represents femininity, nobility and perseverance.

The grounds are filled with trees planted by members of the British royal family. For example, Princess Margaret, Colonel-in-Chief of the Bermuda Regiment, planted a royal poinciana, as did her successor, the Duchess of Gloucester. As Mrs. Fergusson puts it, “The two trees nod at each other.” A Cuban royal planted by Princess Anne, the Princess Royal, in 2006 was replaced by her daughter Zara after it was destroyed in Hurricane Gonzalo in 2014. Other royal families are represented. In 1963 Emperor Haile Selassie planted a princess palm (Dictyosperma album), which was replaced in 2015 after it, too, had been destroyed in Hurricane Gonzalo. And in 2006 Queen Noor of Jordan planted a queen palm.

President Richard Nixon planted a Senegal date palm during his visit in 1972.

But many other trees were planted by leaders in Bermuda and from abroad, as well as by other British prime ministers.  Numerous American presidents have planted trees. President Richard Nixon’s still-standing Senegal date palm (Phoenix reclinata) was planted before the Watergate affair broke out in 1972.  President George H. W. Bush visited Bermuda twice, as did his ally British Prime Minister Margaret Thatcher. The name of the tree she planted in 1981 is amusingly apt: the Lesser Antilles silver thatch palm (Coccothrinax barbadensis).

Most notably, in 1961 President John F. Kennedy arrived at Government House to meet with Prime Minister Harold Macmillan, eventually leaving by helicopter. During their “Big Two” summit they discussed the growing nuclear arms race and the Berlin Wall.  Both leaders planted Canary Island date palm trees, which remain.  Actually, a back injury prevented President Kennedy from planting his—he snipped a ribbon tied around it instead. Given that the Bay of Pigs crisis had happened just six months before, it’s as well he did not plant a Cuban royal. Film footage shows the two leaders chatting amiably together. According to Richard Reeves’s 1994 biography, President Kennedy: Profile of Power, President Kennedy said, “I wonder how it is with you, Harold? If I don’t have a woman for three days, I get terrible headaches.” It’s likely neither could have prophesied that 18 months later the British Conservative government would be brought down by a sex scandal, the Profumo Affair. Neither could they have seen that, far more tragically, President Kennedy would be assassinated in November 1963.

Of course in the future, dignitaries and leaders not yet born will plant trees to commemorate visits and events we cannot now imagine. But in the meantime, Mrs. Fergusson explains, there is one more commemoration planned for 2016. Not a tree, but a pair of ceremonial gates, marked with the initials of Prince Philip, to be erected at the north shore entrance to Government House in honour of the Duke of Edinburgh Awards scheme’s 60th anniversary.