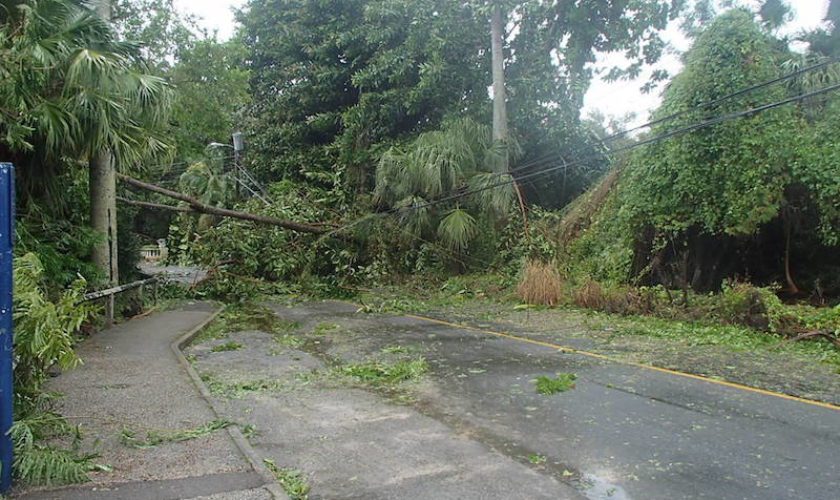 A Look Back on Tropical Storm Fay

Everything looks greener after a good storm. The plants are windswept, bent and broken but they look more alive than ever. Maybe it’s the yellowish morning light or the fact that everything still has a sheen of moisture on it from the pounding rain. Tropical Storm Fay, which might as well have been a hurricane, careened through the island in October 2014.

This was the first storm to make landfall in Bermuda since 1987. This offered a rare opportunity for islanders to experience the eerie calmness of the eye passing over. Citizens of St. George’s ventured out during this lull, wandering down to the town for a few minutes to survey the damage and chat to their neighbors. When the storm started up again, residents watched through the window as boats in the harbour whipped around on their moorings, lead by the eye’s change of wind direction.

Tropical storms and hurricanes remind us that nothing can remain the same forever, and that nature has the power to reclaim all land for its own. After the storm, everything, man made or not, was speckled with splotches of green – leaves stripped from their trees had been plastered to every surface by the force of the rain and wind.   On Longford Hill, a rubber tree had taken down a power line with it as it fell, blocking the road and blowing the area’s transformer. Perhaps what arose the greatest wistfulness in me was a tall palm tree, its girth exceeding my arms’ encirclement, snapped at its base, its ancient growth halted forever. There were many trees I spotted this way as my mother and I walked around the island – trees older than me or my parents, ripped from the ground. 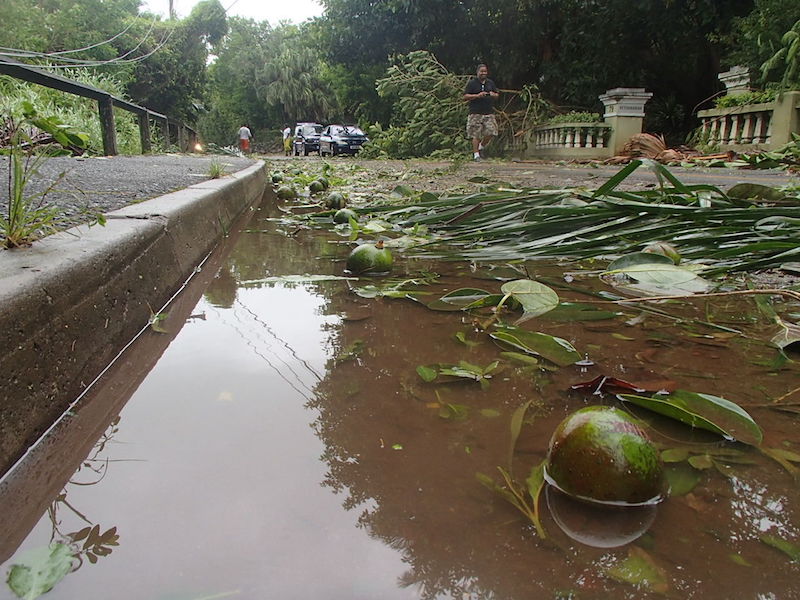 When we got back home, mom made tea on the barbecue, since our oven is electric.   People came out of the woodwork brandishing machetes, brooms, gloves, rakes, trucks; anything to help move the debris. By about noon at least one lane on most roads was clear. You could tell it was an island storm, with avocados littering the streets, as the fruit tree had been in bloom at that time of year, and coconuts having been shaken from their lofty heights.

The road facing the harbor took a beating. Walls were wrecked, having been blown over or crushed under toppled objects. A groaning mast jutted out slightly into the road, its hull about 30 feet below and its wind vane still swinging halfheartedly, as it scraped a rut in the limestone wall. The boat had lost its mooring and had been pushed so far up against the coast that it was sitting diagonally, half out of the water.

More terrifying, perhaps, was the shipping container we spotted, floating in the harbor, secured by a few good samaritans to the shore with some rope. They are the same as icebergs when they make their way into the water; appearing as a thin plank of wood on the surface, but extending many shipwrecking feet below.

We picked up bits of information from talking with others and drove to see the sights for ourselves. Most people didn’t have power at this point, and many roads were still blocked, and people were trying to check on their loved ones by car since landlines were down and cell towers didn’t work. No-one had been prepared for the storm since its intensity strengthened overnight and turned into a few hours of 150 mph winds. There were no fatalities, and schools were closed the next day. 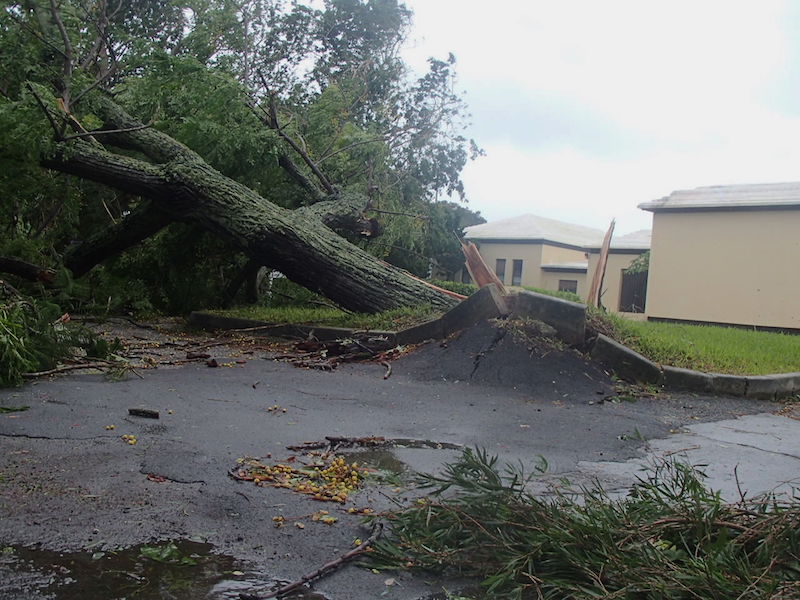 Hurricanes force us back in time to the use of candles to light our way and the dipping of water from our tanks to drink and wash. It’s a pain in one sense, but exciting in another. Candles cast strange, erratic shadows about the room and make you look where you wouldn’t normally.

The other overwhelming fact is the lack of noise. There is no electrical hum from the TV or computer, the fridge is silenced and the whir of the fan or the gurgle of the A/C is absent. It’s a quiet that would be impossible to obtain in any other situation. Hurricanes are time out of time, where everyone is brought to a halt. With no phones or Internet, communication is cut off, work obligations are silenced, and suddenly you are left with no other priorities besides yourself and your family.

The endless waiting, cooped up inside, is a time for self-reflection that the rush of our lives so often prohibits. For a moment, we are forced to really experience things. In this way, hurricanes bring positive effects for individuals as much as they bring destruction.