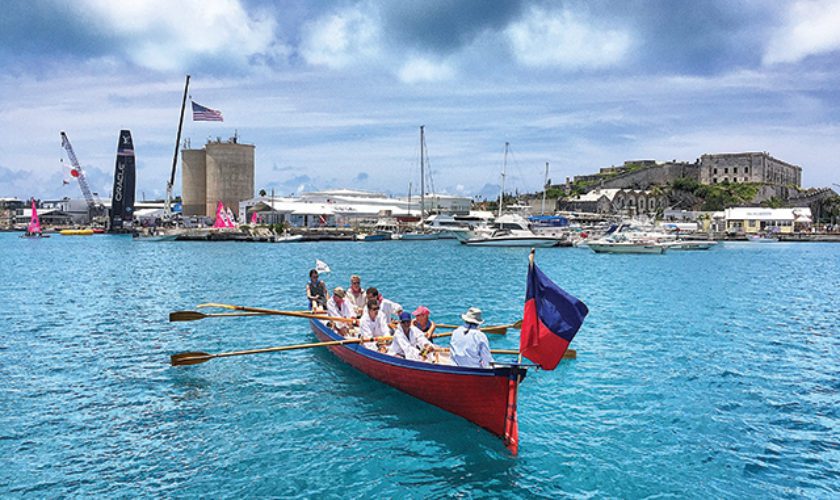 On any Bermuda day, rain or shine, water rough or smooth, you might see a gig cutting through the ocean, thanks to its team of rowers, members of the Bermuda Pilot Gig Club, oaring in unison. For those of us who love history, watching the oarsmen and women is a romantic sight, recalling our island’s maritime heritage and the era when skilled pilots with their own crews would race each other in gigs to meet an incoming ship.

The first pilot on the scene was the one who would guide the vessel through Bermuda’s treacherous reefs. Each crew would have eight members: six oarsmen, the coxswain, and, of course, the pilot. Once motorised pilot boats were introduced, the rowing tradition was in danger of becoming just a memory. However, since June 2015 the Pilot Gig Club has revived the practice and though the gigs no longer race to ships, they do compete both with each other and in international regattas.

So how did the club come about? Rick Spurling and the St David’s Island Historical Society had long been interested in acquiring a Bermuda gig which could be used for historical re-enactments to reinforce the importance of pilot gigs in Bermuda’s history. But as Debbie Jones, president of the Bermuda Diabetes Association and avid gig rower, puts it, “it took a fortuitous cup of coffee” for the club to be conceived. She and her husband were holidaying in Devon, UK, when waiting for a boat to take them to the Isle of Lundy, they chanced on a café by the quay. Inside the café were pictures of pilot gigs all over the walls and intrigued, she began to talk to the proprietor, Steve Lock, who turned out to be a gig-rowing aficionado and who told them there had been “a real resurgence of these 32-foot, 4-foot-10-inch-wide boats on the west coast of England, which were being used for recreational and racing rowing.”

The newly launched pilot gig, Memory, under oar in Hamilton Harbour with her owner, Pilot Henry Tucker, at the helm, 1923.

As a result of their conversation, he was invited to Bermuda to set up a club. (It took him a year.) Jones saw that gig rowing was good, low-impact exercise, ideal for controlling diabetes and for preventing it. A pilot gig club caught the imagination of other organisations, including , she says, Argus, Bermuda Tourism Authority, Colonial, Chubb and so many more donors who made buying the first three gigs in 2015 possible. The boats were named after famous Bermudian pilots. Jemmy Darrell was a slave and gifted pilot who in 1795 piloted Admiral Murray’s flagship Resolution through Murray’s Anchorage. The admiral so admired Pilot Darrell’s “ability and steadiness” that he asked the governor to grant him his freedom. In 1796, Jemmy Darrell was duly freed. The others were named after pilots Harry Fox from St. David’s and John Simmons from Somerset. Fittingly, that Cupmatch there was a rowing competition between St.George’s and Somerset, each team wearing the appropriate colours.

Originally, pilot gigs were long, narrow, wooden boats often rigged with two or three loose-footed “leg of mutton” sails and capable of incredible speeds. Despite their slenderness, they were miraculously able to cope with high seas and the stormiest of weather. According to Maurice Johnson, member of the club and marine historian, boatswain and trainer, the gigs built in Cornwall are of similar dimensions but they are made out of fibreglass, a material far easier to maintain in Bermuda’s humid climate and far lighter though they do weigh as much as 800 pounds. The 14- foot oars, however, with their curved blades or scoops are made of spruce.

By May 2016 the club acquired three more boats named after Bermudian pilots James Griffiths, James Forbes and John Cann. Three of the gigs are kept in St. George’s, two at the Spanish Point Boat Club and one at the National Museum of Bermuda. Like some of the original gigs, including Rambler, which can be seen in the National Museum, they have been fitted with mast steps to fit ketch sailing rigs. Johnson is planning to build the masts out of spruce.

Since the club’s formation, says Jones, “we have held many regattas and have hosted an invitational regatta for overseas clubs. Last October 94 rowers from the UK, the US and the Netherlands participated in our first ‘international regatta.’ The regatta was held in three locations, Somerset, Spanish Point and East End Mini Yacht Club in St. George’s. The seas were rough with gusts as high as 27 knots. These boats are made for heavy seas.” Like the old gigs they can be taken out in any kind of weather, unlike conventional rowing boats which need calmer waters. Rowing a gig involves the full body, explains Johnson. “You don’t just use your arms—you use legs, abdomen, or torso with your arms finishing off the stroke. It’s a pretty high-calorie burn—40 percent of the action uses legs, 40 percent core and 20 percent arms. You push with your legs, your arms straight and then your body leans back with 45 percent of the oars on your shoulders. By the time a stroke is completed, each oar has completed 90 percent of an arc. A good team can travel seven miles an hour.”

Club members range in age from 16 to 76, Johnson says, and most were originally new to rowing. New members are given three complimentary half-hour training sessions. After that they can join the club for $125 a year and pay two dollars a row which goes towards upkeep. As Jones says, “We have old, young, black, white, male and female all rowing together, sometimes for an early morning row to catch the sunrise and spot turtles or for a hard training row where every muscle is put to the test to make those boats move.”

Even tourists have the chance to re-live the piloting side of Bermuda’s history. Johnson presents talks for tourists about the history of Smith’s Island but the guests can also row (or be rowed) with club members as well. The boats are also used by at least six other organisations, some of which have rowing teams.