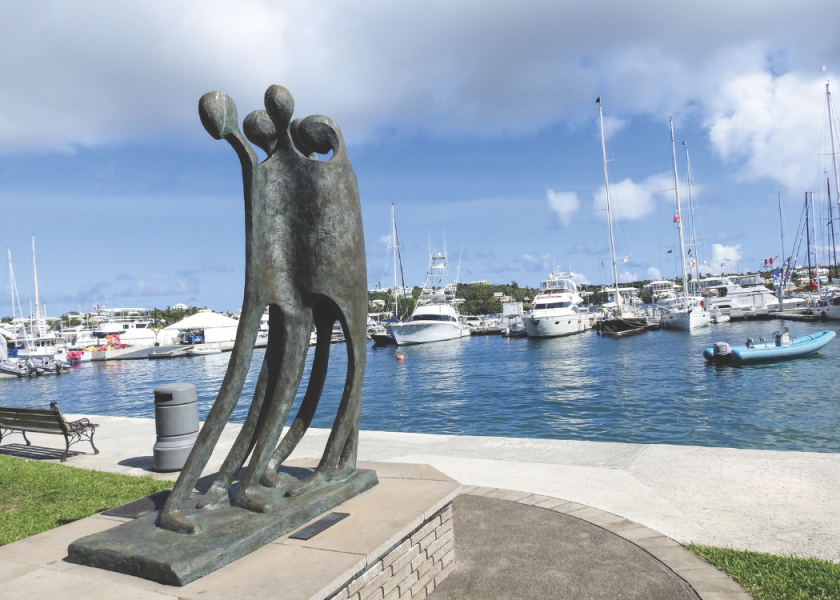 Cross Church Street at the traffic lights on the City Hall side of the road and turn left down Queen Street, named after Queen Victoria. Immediately cross at the traffic lights so that you’ll walk down the rightside of Queen towards the harbour. This way you can see up close some of the city’s older buildings, many of them featuring pastel colours, white quoins and roofs, and painted shutters, necessary protection against hurricanes. One cottage-like business on the right in addition features a beautiful cedar front door and cedar gates.

Next, also on the right, you’ll see two adjacent double storey traditional buildings with an upper wooden veranda and lower porch. Today, they house the Bermuda National Library and Bermuda Historical Society Museum but once they were the home of Postmaster William B. Perot. The house was called Par-la-Ville. From 1818 Perot ran the post office for nearly 43 years, first from one of its rooms and later from the annex he built a little further down the road, which is still the Perot Post Office. Perot was famous for inventing Bermuda’s first penny Perot stamp. The giant rubber tree still growing outside the museum grew from a slip his son, Adolphus, sent him from Demerara in 1847. Mark Twain on seeing it said he found the tree disappointing since  it was not producing hot water bags and rubber overshoes. Perot was an avid gardener, as the neighbouring Queen Elizabeth Park shows. Formerly known as Par-la-Ville Park, it was indeed his back yard, complete with a citrus orchard. The Museum is well worth visiting for its collection of Bermuda crafted silver, cedar furniture, paintings and other artefacts.

The Bermuda Book Store towards the end of the street was built around 1819 and remains architecturally almost unchanged. Oppositeis the Victoria Block, now housing a liquor business. It was so called because it was from here that the 1837 accession of Queen Victoria was announced.

At the junction of Front Street and Queen is the iconic birdcage, erected in the 1950s as a shelter for police directing traffic and named after its designer, Geoffrey “Dickie” Bird, the city’s first engineer.

Continue round the right corner past the Book Store and Torwood Home until the pedestrian crossing. Cross Front Street and you’ll see the Ferry Terminal. Turn right, pass a café, and turn left onto Point Pleasant Road. You will come to Albuoys Point, where small cruise boats pick up and drop off visitors. A monument honouring the crew of the armed merchant cruiser HMS Jervis Bay stands here. After leaving Bermuda, Captain Edward Fegen and many of the crew were killed defending a British Atlantic convoy against the German heavy cruiser Admiral Scheer in 1940. Only 65 survived. The park here is also called Point Pleasant and is a favourite spot for locals taking a lunch break, also for outdoor concerts. Nearby is the picturesque Royal Bermuda Yacht Club, established in 1844 and the third oldest ‘Royal’ club outside the UK.

Walk past the RBYC towards Front Street and turn left onto a narrow lane which takes you to scenic Barr’s Bay Park, named after William Barr. But a statue, “We Arrive” sculpted by Bermudian artist Chesley Trott, is a reminder this relaxing park overlooking the harbour has historical and personal significance for many Bermudians. It commemorates the providential arrival of an American slave ship, the Enterprise in 1835, the year after Emancipation in Bermuda. The ship was blown off course during a storm, forcing the captain to steer the ship into Bermuda’s Hamilton Harbour. As a result the majority of enslaved men, women and children were freed and allowed to stay in Bermuda. Some Bermudians can trace their roots back to when their ancestors arrived on the Enterprise.

To the north, Barrs Bay Park also offers views of the more modern, financial part of the City – the Chubb and ACE buildings. You can exit the park on Pitts Bay Road, an extension of Front Street. Cross on the pedestrian crossing and turn left. Look for the signposted Par-la-Ville Road on your left. Turn on to it and cross the road to a set of steps which leads through a moon gate into Perot’s beloved gardens, the Queen Elizabeth Park. Enjoy shady flowering trees, colourful flowerbeds, vines on trellises and tiny pools. The park is also home to outdoor sculptures, including Jeté, featuring a ballet dancer leaping mid-air, the gift of Bermudian art collector John Hinson Young and his wife Neiga to the Bermuda National Art Gallery.

After enjoying a wander around the park’s paths, you can take one down to the Bermuda Historical Society Museum and re-join Queen Street. Turn left onto Church Street and cross at the pedestrian crossing, the City Hall Car park on your right. Enter the car park and you’ll also enter the recently designated Freedom Square. In the southern corner, a plaque marks the site of Bermuda’s first Methodist church, Zion’s Chapel, which built in 1810 during the era of slavery, was also the first church where whites and black enslaved Bermudians could worship together.

Nearby, a bronze statue created by Chesley Trott, “When Voices Rise”is a powerful reminder of how the peaceful Theatre Boycott of 1959 resulted in the desegregation of Bermuda and the end of racial discrimination in hotels, restaurants, schools, businesses, Government and other social spaces.

Back at City Hall, it’s appropriate to reflect it officially opened in 1960, the year after the successful Theatre Boycott. No wonder Bermudian author Vernon Jackson wrote the new building was “a glowing symbol ofhope and promise for the future.”