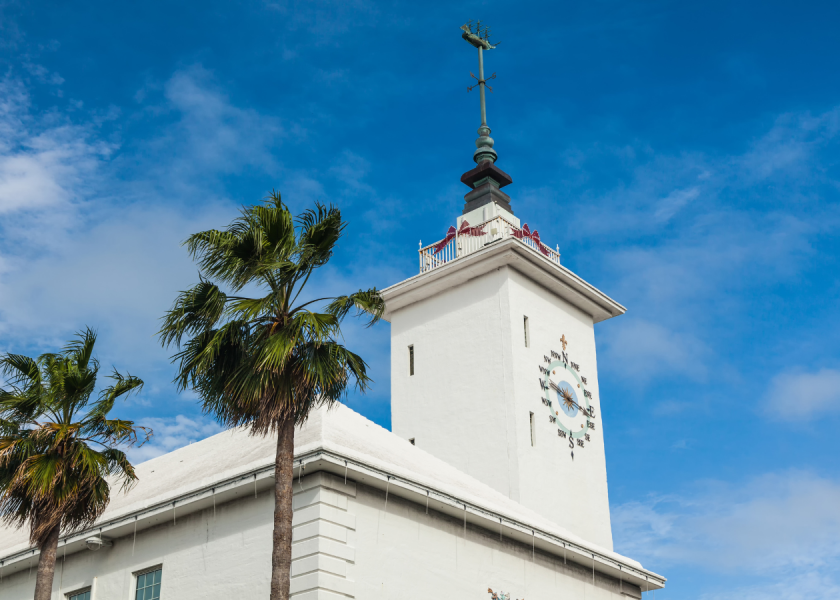 Culture Walk: City Hall to the Cathedral via Victoria Park

Walk through the foyer of the City Hall and exit through the rear entrance. Cross Victoria Street and walk down Washington Street. On the left side of the road is Daylesford, home to the Bermuda Musical and Dramatic Society, and on the right Victoria Park, yet another Bermudian venue named after the Queen. Once, however, the park was a playground for children and was named Deane’s Bottom after a schoolmaster who ran his school nearby. In the 1880s the Hamilton Corporation turned it into a park and in 1889 added the bandstand to commemorate Queen Victoria’s Jubilee. Enter the gate and you’ll see the bandstand making the park today a popular site for outdoor concerts and other celebrations. The park’s collection of trees, including palms, frangipani and mahoganies, offer welcome shade in the summer.

Across the park, near a First World War memorial, is the Cedar Avenue exit. Look left and you’ll see St Theresa’s, Bermuda’s Roman Catholic Cathedral built in 1932.Turn right and continue along Cedar Avenue. Until the cedar blight in the 1940s, this avenue did consist of Bermuda cedars but though some are growing today, other trees have also been planted.

Cross over Church Street and you’ll see Cedar Avenue becomes Burnaby Street. Continue, crossing Reid Street until you reach Front Street. Ahead you will see the harbour and on the opposite side of Front Street, the Flagpole. This is a focal point in the City where parades such as the Beating of the Retreat and the Queen’s Birthday Parade begin. It also marks the start of the Front Street Mile Race. Turn left and continue along Front Street. Opposite you’ll see the cruise ship terminal. Once Hamilton was the main port for cruise ships but with the coming of the mega ships, the Royal Naval Dockyard has taken over. Nevertheless, the smaller cruise ships do still visit.

Walk over Parliament Street at the pedestrian crossing and you’ll see an entrance to the Cabinet Building, built in the neoclassical style in 1841 with a cedar door. It was first known as the Public Building and in 1938 as the Colonial Secretariat. In 1850 it also had a public library. Now it houses the Premier’s office and is the Senate’s meeting place. The grounds are open to the public. Enter them and you’ll see in a garden corner on the left a bronze statue of Sally Bassett, who was charged with and found guilty of colluding with her granddaughter, Beck, to poison Beck’s “owners”, the Forsters, and the also enslaved Nancy. She claimed her innocence to the end. The statue, created by Carlos Dowling, depicts her being burnt at the stake, and stands testimony to the fact slavery is never benign. Also in the grounds, you will find the Cenotaph, a replica of one in Whitehall, London and an obelisk to Major General Sir William Reid KCB, Governor of Bermuda from 1839 to 1846. He wrote an important book on tropical storms in Bermuda and was also known for promoting agriculture here when our maritime economy was declining, thanks to the coming of steam ships.

Exit the grounds on Court Street, so named because the buildings on the right side of the road once housed the Magistrate’s Court, and turn left. On your way up to Reid Street you will see the distinctive terracotta edged clock tower and arches of the Sessions House. It was built in 1817 though the towers and arches were added later, in 1887, to honour Queen Victoria’s Golden Jubilee. The additions are said to have been inspired by Queen Victoria’s holiday residence, Osborne House, on the Isle of Wight. Italian stonemason Pietro Chiappa helped with the construction and his descendants are in Bermuda today. This is where our House of Assembly, the oldest self-governing parliament in the western hemisphere and the third oldest in the world, meets.

Cross Reid Street and continue up Court Street until you reach Church Street, appropriately named because of the number of churches in the area. Look down Court Street and you’ll notice on the right St. Paul’s African Methodist Episcopalian Church. On Church Street itself, St. Andrew’s Presbyterian Church is on the right. Cross Church Street and turning left, make your way to the Anglican Bermuda Cathedral of the Most Holy Trinity, which is a little way past the Wesleyan Methodist Church. Originally, Trinity Church was on this site but after being consecrated in 1855, Trinity was burned down in 1884 by unknown arsonists. Scottish architect William Hay designed the new one in 1885 and work began immediately.

Constructed out of Bermudian stone from Par-la-Ville and French stone from Normandy, the cathedral also has beautiful stain glass windows that reflect some of Bermuda’s history. One window is in memory of Governor Lefroy who was also known for his memorials of Bermuda’s early history. A brass tablet dedicated to Sir George Somers is a replica of one in his birthplace church at Whitchurch Canonicorum in Dorset. The pulpit, made of Caen stone and Irish marble, is a replica of the one in St. Giles’ Cathedral.

Because the church can hold up to 1,000 people, it’s a favourite venue for concerts. By 1911 the church became the official bishopric seat of Bermuda’s Anglican Church. Since then its 143-foot tower has become a much loved landmark on the city’s skyline. It’s also an attraction for tourists willing to climb the 155 steps to the top for a spectacular panoramic view of the Harbour, the City and much of the island.

Back on Church Street, continue your walk past the Bus Terminal and you will return to the front entrance of City Hall.