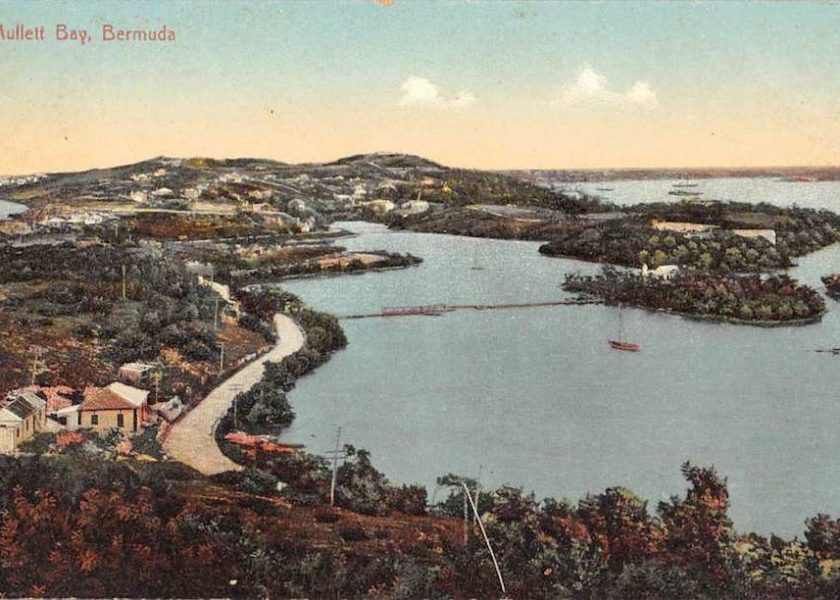 A Walk in Stokes Point

Mike, our friend Alison and I wander down a leafy lane and find Bermuda in blossom. The Surinam cherry flowers are out and the nasturtiums a blaze of orange and yellow. The path goes upward to a small clearing and then I see it—a commemorative stone saying:

The pond, half-hidden by overgrowth comes as a surprise although if I’d looked at the map, it shouldn’t have. But none of us had ever been to Stokes Point Nature Reserve before although we had all heard of Bartram, thanks to William Zuill’s Bermuda Journey and in my case an article was written by David Wingate for the Bermuda Historical Quarterly in 1964. Bartram had come to Bermuda in 1834, the year of emancipation, as a military servant to Captain Joseph Hunter. He was given a discharge on the condition that he farmed Hunter’s estate at Stokes Point. And farm he did, but he also became a dedicated follower of Bermuda’s wildlife. As the years wore on, he increasingly found birds, animals, and wildlife far more companionable than humans. He kept aviaries, practiced taxidermy, and stored his own collections of stuffed birds and shells in his own museum. Becoming more and more isolated from ‘normal’ society, he separated from his wife who had come with him from England. Some years after she died (they had no children) he married or lived with a woman from the black community. Eventually, they had a son also named John Bartram, whose descendants are living in Bermuda today. And so he spent the years, a virtual recluse, adding to his collections and writing about birds and natural history. He had visitors, though, since his reputation spread to other naturalists and writers.

As we stand by the pond watching with delight an egret flying across the water, I think of what this district must have been like in Bartram’s time. The present nature reserve, located on the left of Ferry Road, shortly after the Swing Bridge leading into St. George’s, is tiny compared with the extent of wilderness that must have stretched uninterrupted to Stokes Point where we now see the vestiges of the Severn Bridge was built in 1934 to connect St. George’s with St. David’s. No bridge then, no airport, no proper roads, and no housing estate either. Just his cottage and museum. I remember Lady Brassey’s account of her journey by horse and carriage to Bartram in 1883, quoted in Bermuda Journey: “…when we reached the place where we had been told to turn off the main road, we could scarcely believe it possible for a carriage to proceed along the rough track. We decided, however, to make the attempt; and one of the party accordingly got out and walked in front while the driver skillfully guided our gay little horse up and down the most extraordinary places, over plowed fields, between trees, the branches of which met not only over, but across the path, so that they had forcibly to be held back while we passed; sometimes ascending a bank at such an angle that I thought we must inevitably be capsized, at others coming down steep places or over such huge stone, with such jolts, that I thought our springs must break, especially when we came to the margin of the sea close by a ruined cottage, and meandered over the beach and boulders for some distance, the waves on one side of us washing the wheels of the carriage.”

What a Mecca for birds it must have been. But much later, the pond here was filled in with garbage and the land on Stokes Point taken over by houses. Fortunately, in the mid-1980s, the Bermuda National Trust and the Audubon Society acquired this area. And thanks to the help of the ESSO company, the garbage was dragged out and the pond renewed.

Today we’ve had the kind of ornithological luck Bartram would have approved of. Just as we arrived at the reserve’s entrance, a cardinal couple hopped cheerfully on the pathway, completely undeterred by our presence. And now as we make our way through an overgrown trail on the south side of the pond we see a yellow-crowned night heron perching on a black mangrove, looking unusually energetic considering its early afternoon. Then a blue heron, its long legs extended, flies out of nowhere over the water. The pond itself is teeming with life—minnows and what I’m later told are killifish, and water mosses so thick you think they’re clicking to rocks but are in fact floating free. A host of water snails feeds on them.

On this side of the pond, we’re by a banana patch, surrounded by twisting trails lined with cedar, white cedar, and spice. As we take one of the trails, the spring theme continues—wire weed in the pale orange flower, wild stocks in white, yellow and mauve, trefoil, and vetch. Herbs, too—wild parsley and mint. Back to the pond, we notice clumps of the elusive scarlet pimpernel. Then magically a very young egret lands on the small beach no more than a foot away from our presence. It stares at us impassively, then gazes contemplatively across into the mangroves.

Perhaps the spirit of John Bartram lingers here, making the birds less shy and secretive. Suddenly, I imagine him in this deserted spot, an old man with his long locks of grey hair and his long, plaited beard, defying the conventions of society by living with the rhythms of nature.