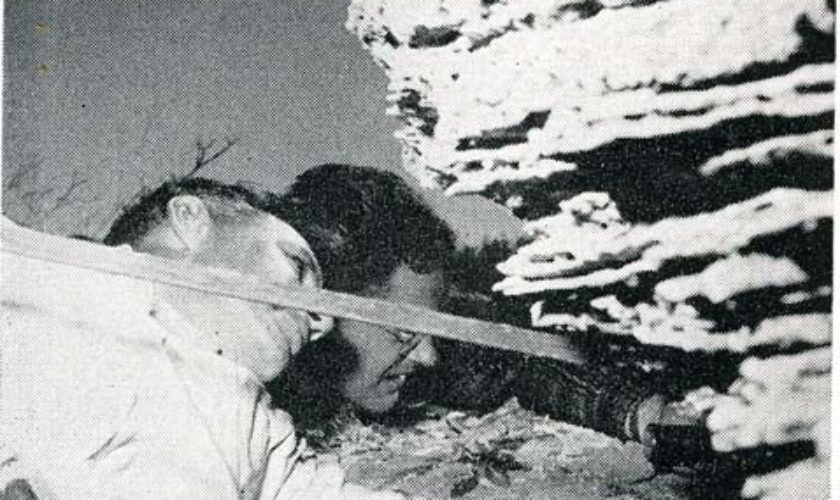 This article was taken from our archives. It first appeared in the April 1951 issue of The Bermudian. It appears here exactly as it did originally.

On January 28, 1951 ornithological history was made by the re-discovery of the Bermuda cahow. What is a cahow, and why should it make history?

It is an elusive bird which spends most of its life over the open seas, skimming over the waves in search of its food, visiting the land only during its fours months long breeding season. It is a member of the petrel family, its scientific name being Pterodroma cahow, the official description of the bird being made by Dr. John T. Nicholas of the American Museum of Natural History and my father Mr. Louis L. Mowbray, my predecessor at the Bermuda Government Aquarium and Museum. Its name was derived, reportedly, from its mating call.

In the days when Bermuda was being colonized by the Adventurers of the Virginia Company, and subsequently the Bermuda Company, there were countless thousands of oceanic birds on these shores, and during the winter months at least two varieties of quite similar birds were captured by the colonists for use as food. The method of capture employed by these hunters was, generally, to use a brushwood torch to attract the night-flying birds, at the same time uttering vociferous shouts and screams, and when the birds alighted on the outstretched arms or the head of the hunter they were killed by a club. This slaughter went on for years with the result that their numbers were greatly depleted. By the year 1616 so many of these birds had been destroyed that the Governor, Captain Daniel Tucker, issued “A Proclamation against the Spoile of Cahowes,” but already it was too late. Within a few years of this date there were none of these birds in evidence. Not only had the birds been killed for food, but their nests had been raided and the eggs eaten by the hundreds.

William Stachey, writing on July 15, 1610, the second year of the colonization of the Bermuda or Somers Isles, states in part “In January we had great store of their Egges, which are as great as an Hennes Egge, and so fashioned and white shelled, and have no difference in yolke nor white from an Hennes Egge. There are thousands of these Birds, and two or three Ilands full of their Burrows, whether at any time (in two houres warning) wee could send our Cockboat, and bring home as many as would serve the whole Company.”

The brief descriptions of Strachey and others remained as the only information available about these strange birds. Except for the many bones recovered from former nesting sites in old caves, true identification of this petrel was not possible until February 22, 1906, nearly three hundred years after their almost complete destruction. On that date my father discovered a petrel in a rock crevice on Castle Island.  Subsequent checking with bones, fragmentary skulls, etc., proved that this bird was similar to the cahow of earlier days. This established the fact that the birds were not completely extinct. However, in spite of periodic search, nothing further was learned of the cahow until May, 1941, when a soldier of Bermuda Volunteer Rifle Corps picked up a live bird which had evidently struck one of the tall wireless towers at St. George’s, and took it to Dr. William Beebe,. This was subsequently identified as a cahow by my father, and was on exhibition at the Aquarium for several days. An account of the event was published in the Mid-Ocean News of May 31, 1941.

During the course of his scientific research in Bermuda, Dr. William Beebe collected and photographed several birds, cuts of which appear in his well-known book Nonsuch, Land of Water, and credited by him as being the cahow. He also identified the bird correctly as Audubon’s shearwater. However, the two birds, in fact, are far from being one and the same. It is quite probable that Audubon’s shearwater appeared in considerable numbers at the same time as the chows in the 17th Century, as they do today. It is this bird to which I refer in the third paragraph of this article.

In June 1935, a boy found a dead bird at the foot of St. David’s Lighthouse which subsequently came to the notice of Dr. Beebe. This proved to be an immature cahow, and it and the type specimen are in the possession of the American Museum of Natural History in New York. So far as is known these birds are the only cahows which had been found since 1621, and will serve to accentuate the importance to ornithologists of the more recently obtained information concerning these birds.

For the past few years I have often searched for breeding cahows on some of the uninhabited islets on the perimeter of Castle Harbour, but without success. About sixty years ago I recommended to Mr. Fred Hall, then a serving lieutenant in the United States army, that he search certain of these islets on the chance that he would be more successful than I. He did discover several partial skins of birds which in his opinion, had been killed by rats. These fragments were sent to the American Museum of Natural History, and came under the scrutiny of Dr. Robert Cushman Murphy, Lamont Curator of Birds at that Institution, and unquestionably the world’s leading authority and oceanic birds. The partial skins were identified as belonging to the petrel and shearwater groups, but so far as I am aware, no more positive identification was made at that time.

Dr. Murphy became greatly interested in the possibility of finding cahows breeding in Bermuda after all these years of obscurity from man, and through the interest and assistance of the great friend of science, Mr. Childs Frick, of Roslyn, N. Y., and Castle Point, Bermuda, he made his first Bermuda visit in January of this year.

Inclement weather prevented Dr. Murphy and myself from visiting the rocky islets immediately after his arrival here, though we utilized time by searching less likely areas on the mainland, and in searching for fossil and sub-fossil remains of the cahow in some of the caves in the Walsingham area. In this latter we were partially successful. Through the cooperation of Mr. H. Bernard Wilkinson, M.C.P., we were permitted to search “behind the scenes” at his Crystal Cave, and several good bone fragments were found. Mr. A. E. Haycock, of Bailey’s Bay, showed us the calcified partial skull of a petrel in his Wonderland Cave which has been found by his father many years previously. A little known cave at the Government quarry was opened for our inspection through the cooperation of Mr. Idwald Hughes. A few bones were discovered there also.

On January 28th, however, we succeeded in reaching some of the islets on which I had previously found nesting Audobon’s shearwaters. Our pooled knowledge-Dr. Murphy’s familiarity with the nesting habits of most petrels, and my acquaintance with the nesting sites-finally resulted in the location of a nesting cahow. These birds nest in burrows which often extend many feet underground, and the actual nesting hollow, except in very rare instances, is not visible from the entrance.  It is this fact that led me to believe in the past that the burrows, which I had located, formerly were not occupied.

Further search revealed that there were at least six nesting pairs on that islet at the time, and the probability of three more pairs close by. A pair of Audubon’s shearwaters were also found courting gin a crevice on the same islet.

The general appearance of the cahow is as follows: the size of the body is about equal to that of a small pigeon, though the wing spread is about twice that of the latter. It has a strong black beak, with a tubular nostril. It is web-footed, the feet being blackish, and the legs are pale flesh pink. In color, the cahow is of quite uniform dark slate-gray on the entire upper parts, the face and entire under parts being white.

These, and all other birds in Bermuda, except the common crow, hawks and the English sparrow, are rigidly protected by law. By the time this appears in print it is likely that certain islets near Castle Harbour will have been declared to be bird sanctuaries, and that trespassers will be subject to prosecution. This action is being taken to help in every way possible to increase the opportunities for these historic birds to breed, survive, and if possible, increase in numbers.

This legislation will not prohibit normal visits to places like Castle Island and Nonsuch, for the only areas concerned are certain uninhabited, and usually inaccessible rocky islets. The cooperation of the public is earnestly solicited in this attempt to assist in the preservation of a rare species. In the event of discovery by a layman of any bird which is thought to be a cahow, the proper procedure is to leave it unmolested. It will take care of itself, except under most unusual circumstances.