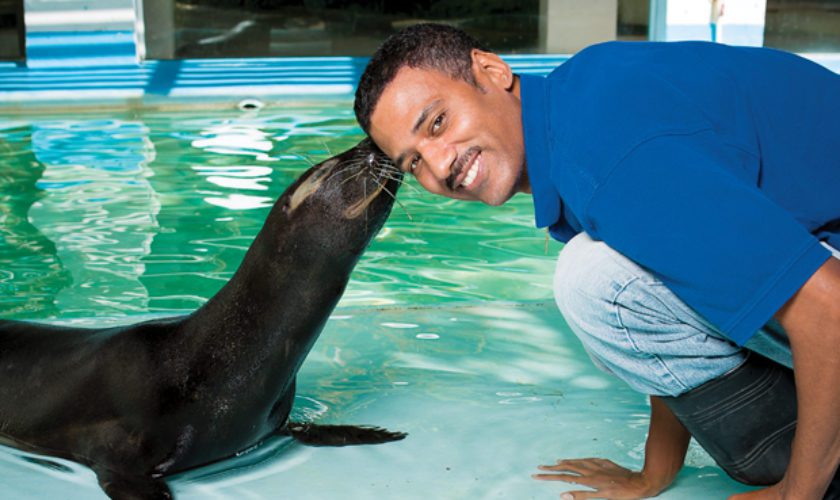 What is the one attraction that all adults remember from their childhoods spent in Bermuda?

It has to be the Bermuda Aquarium, Museum and Zoo (BAMZ), most commonly referred to simply as “the Aquarium.” Ever since its opening in 1926, generation after generation of children has visited this familiar landmark just over the bridge at Flatts Inlet and gazed in wonder at a whole myriad of creatures from all over the world.

In time, those children have also had children and, like their parents before them, have seen the Aquarium as a godsend for something interesting to do on rainy days, long summer vacations and afternoons after school. While ferrying their offspring around they greet some of the animals like long-lost childhood friends—Crooked Nose, for example, is a 99-year-old Galapagos tortoise who has been with BAMZ since it began. And they will remember animal friends of their past, like the penguins and racoons. Archie, the seal, was a well-known character loved by many before he died at the age of 37. BAMZ, too, is generally the first place people think of for rescuing and rehabilitating hurt birds, turtles or other animals they have found while swimming or walking.

But how many visitors realise that BAMZ, small as it is within its seven-acre property, is an important centre for research, education and conservation projects? Or that it has connections with zoos, aquaria and related organisations in North America and Europe and has, since 1994, been consistently accredited by the Association of Zoos & Aquariums (AZA)? That accreditation and those connections are crucial because important though BAMZ has always been as a key Bermudian attraction for both locals and tourists, it would be a serious mistake to see that role as its sole function.

Staff working for BAMZ and its support charity the Bermuda Zoological Society all passionately believe there has to be a greater reason for keeping animals in captivity than merely providing entertainment. “Do I believe animals should be kept in captivity?” principal curator and veterinarian Dr. Ian Walker asks rhetorically. “The answer for me would be ‘no’ unless there’s a very, very strong reason for it. Unless you have an education component. That’s the justification. There’s a need to get children and adults understanding and appreciating nature so that they will conserve it. If you don’t appreciate nature, why would you conserve it?”

in this regard, BAMZ’s and the Bermuda Zoological Society’s shared mission statement makes perfect sense: “to inspire appreciation and care of island environments” through its animal exhibits, its education and research programmes and through conservation projects.

How does such a small facility carry out this mission? “We are the best example of a public/private partnership,” Walker explains. Government (under the mandate of the Department of Conservation Services) owns all the buildings and the animals and provides the infrastructure. All three curators (Dr. Walker, Patrick Talbot, curator of the aquarium and zoo, and Dr. Struan (Robbie) Smith, curator of the natural history museum and head of education and research) are paid by government—as are the animal carers. The Bermuda Zoological Society charity is responsible for education, volunteer programmes, membership and fund-raising for new additions to the facility. It’s the perfect working relationship—two bodies with dedicated staff and volunteers working towards the welfare of animals on the one hand and education, research and conservation on the other.

Visitors to the aquarium and zoo might not realise how much care, attention and thought are paid to the animals’ welfare. The Caribbean and Australasia exhibits, as well as the most recently introduced Madagascar exhibit, give the animals a natural habitat quite unlike the barred cages we associate with zoos of the past. “The Madagascar facility was built to provide another interactive exhibition where there’s nothing between you and the animals. You’re at home with them, which is a much better way of seeing them,” says Walker. But it’s also a habitat that provides something for the animals.

The year it was introduced, 2011, was a busy time for importing new species to Bermuda. “All the animals in the zoo are brought in from other zoos,” explains Talbot, “and are carefully chosen for their health and safety.” Another issue when choosing the animals, he says, “is getting the right mix of the cute and fuzzy with the cold and the reptile. We need the fuzzy to pull in the public.” But since an important goal is to conserve and protect endangered species—in this respect Walker sees the aquarium and zoo as an ark—the animals that don’t have general appeal are also imported. “No-one sees lizards, for example, as important for recovery. But we have a recovery plan for the practically extinct Bermuda skink lizard with Chester Zoo (UK) which specialises in animals threatened by loss of habitat and predators. We sent 12 lizards there—they will breed them so that perhaps we can reintroduce them.”

As animal registrar, Barbara Outerbridge is responsible for the complex administrative process of bringing animals in and sometimes sending them out. “Our preferred sources are ideally zoos in gateway cities in the US,” she says, “because of shorter flights. But we also bring animals in from Canada.” In addition, they are looking to import from Europe and the UK to gain species unavailable in North America. Whatever the source, accreditation is vital. It’s far easier for American zoos, for example, to deal with zoos at home rather than with ones overseas, so BAMZ has to establish its credentials. “One of the first questions they ask is whether we have accreditation,” she explains. “Having accreditation is like having a reference letter which makes it easier for us to trade.” (Outerbridge has increased BAMZ’s credentials by becoming a member of the Zoological Registrars Association and subsequently the vice president of its board. And, as Talbot points out, this connection gives BAMZ kudos since the Association has few international members.)

Taking animals from other zoos avoids the ethical compromise of capturing them from the wild, but it also means that animal carers can be confident that the animals have had good care. In addition, they have as much background information about the animals as possible, such as their date of birth or hatching and detailed records of their health, movement, breeding and behaviour. Outerbridge, who first came to BAMZ as a volunteer aquarium records keeper, is in charge of this information as well as all BAMZ’s records, which begin the moment of the animals’ arrival in Bermuda. Animal carers and aquarists note down their observations about the creatures’ movements and about medical and territorial issues. The information is then recorded on Outerbridge’s data base, which is backed up on a computer in the National Aquarium of Baltimore. In addition, the data is shared with the International Species Information System (ISIS), a global custodian of information about animals. This information, both quantitative and qualitative, is very important, not least because if staff with specialist knowledge leave the facility, at least some of their knowledge will be retained.

When the animals arrive in Bermuda, Outerbridge, along with one or two zoo keepers, greets them at the airport. As the animals are uncrated at BAMZ, Walker checks them for stress. Then they are put into quarantine for 30 days under the watchful eye of Roma Hayward, who, as a licensed veterinarian technician, is quarantine officer. After that, the arrivals are introduced to other animals in stages under careful observation. Some animals get used to each other through their olfactory sense first, and then with their visual sense.

What about the fish and
ocean life in the aquarium? Unlike the zoo animals, the fish are 100 percent Bermudian. “We have a fish collector, Steven Davis,” Talbot explains.

“We give him a shopping list. But instead of going to Lindo’s he goes to the ocean! One or two aquarists go with him. We have the advantage of being in the middle of the Atlantic—so we can use water fresh from the ocean. It’s pristine.”

Schools of fish caught for the aquarium also go through a 30-day quarantine for observation. “We treat them all as if they have parasites, moving the fish every five days from one tank to another. We dip them in fresh water for awhile—they can handle it, but the parasites can’t.” The fish caught for the North Rock exhibit are also introduced to the other fish in stages to prevent predation as much as possible. “We put them in a cage and then into the tank so they can get a look at their surroundings and know what predators are there.”