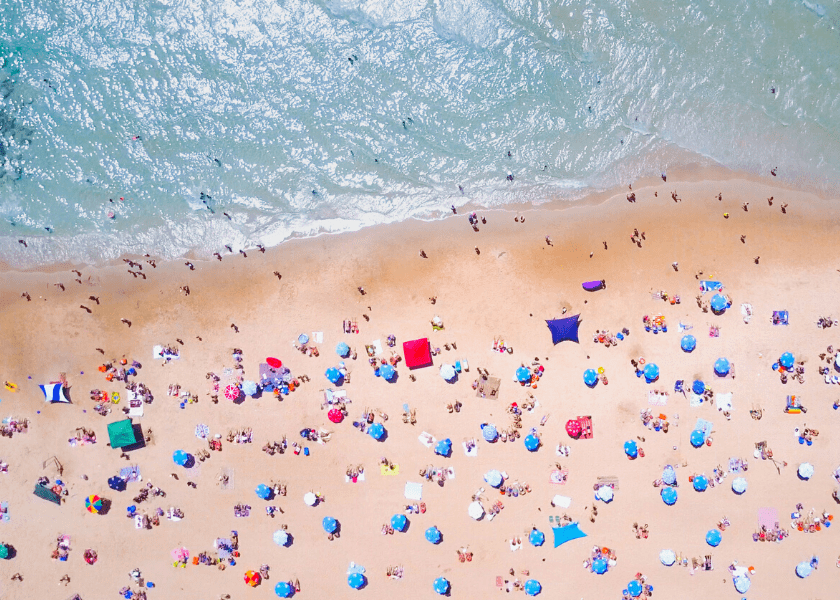 Note: The photo above does not accurately depict safe social distancing. If you are venturing to the beach this summer, make sure to follow Government guidelines and practice social distancing from other beachgoers.

Despite the restrictions imposed on us by COVID-19, Summer is officially here and there are plenty of ways to celebrate while still social distancing. Here are some of our favourites.

1. Bodysurf the South Shore
You probably haven’t been body surfing since you were a kid. It was the only reason to ever go to a beach back then, to conquer the waves and let yourself be lifted up and crashed back into the water again. You can get all the fun of body surfing without any equipment at all, but if you’re really looking to play in the waves, bring along a boogie board or a skim board. Some of the best beaches for bodysurfing include Warwick Long Bay, Elbow Beach and John Smith’s Bay.

2. Enjoy a Dark ‘N Stormy
It was a dark and stormy night when the Sea Venture wrecked upon the Devil’s Isles, resulting in the colonization of Bermuda in 1610, and it’s a Dark n’ Stormy tradition that Bermudians enjoy 400-plus years later. Made with a devilishly delicious combination of Gosling’s Black Seal Rum and ginger beer, Bermuda’s national drink was trademarked in 1980.

3. Go Swimming in the Rain
Rain is often a scare resource during summertime in Bermuda, but sometimes storms threaten the island and whip up a gale. If it’s raining on a weekend, don’t be put off swimming – swimming in the rain is a phenomenon for the senses thanks to the cold rain buffeting you from above, and the calm, warm water surrounding you below. Snorkelling is actually better in the rain, because visibility is increased. Just take care not to swim if lightning and thunder accompany the rain. Swimming with lightning is incredibly dangerous because salt water conducts electricity and can channel a lightning strike towards you. In addition, since a swimmer is higher than the rest of the water, the strike may seek you out.

4. Go Rockpooling/Dockpooling
Bermuda plays host to an array of creatures that you can find living on the shoreline. Ocean spray and large waves often fill up tidepools with water, providing sea urchins, anemones, and snails like nerites, periwinkles, and top shells with a sheltered habitat. You might also see shrimp, blennies, sally lightfoot crabs, and sergeant majors, too!

If you get the chance to look around a boating dock, you’ll be able to see a lot of marine life without getting your feet wet. The dock’s surface is covered in caulerpa, algaes, and hydroids. It also provides a shady cover for fish to hang out under. Here, you might see porcupine pufferfish, snapper, barred hamlets, grunts, bream, chub, hogfish, and more.

5. Go in Search of Glow Worms
As the water surface temperature increases, so does the likely of spotting mating glow worms. But keep in mind, they stick to a very strict schedule: You can only see their spectacular green light show in the water three days after the full moon and 56 minutes after sunset. The worms usually live on the sea bottom, but rush up to the water’s surface to mate. The females let off a glowing green whirl of eggs, and the males see the light with special cells in their eyes and let their gametes go into the water too. You can see glow worms in any sheltered bay, and some of the best places are Ferry Reach, Mangrove Bay, and Higgs and Horseshoe Island. For more information on glow worms, look here!

6. Eat Fish Chowder Garnished with Sherry Peppers & Black Rum
Legend has it that Bermuda fish chowder is as old as Bermuda, having become a diet staple of the Sea Venture survivors who unexpectedly landed upon our shores in 1609. Although no longer essential to survival, Bermuda fish chowder is frequently referred to as our national dish, and it isn’t complete without the addition of sherry peppers and black rum. Although many men contend that their mothers cook the best fish chowder on the island, it is incontestable that the best place for fish chowder is The Lobster Pot, which has won numerous best-fish-chowder awards over the years in our annual Best of Bermuda Awards. If anyone can think of a reason not to enjoy a bowl of Bermuda fish chowder, he is, quite simply, un-Bermudian.

7. Go Line Fishing Off the Rocks
The smell of salty sea air as we choose our special spot, the sound of the water gently lapping against the rocky shore and the warm feeling of spending leisurely time with a loved one—well, the experience never gets old. Fishing off the rocks is as Bermudian as it gets.

8. Walk, Cycle or Ride the Railway Trail
Once upon a time Bermuda was a quiet island. There was only one form of motorized transportation besides the motorcycle, and Old Rattle and Shake was her name. Built in 1931, the Bermuda Railway was the Bermuda government’s answer to providing mass transport for locals and visitors without cars disrupting the peace and quiet tourists had come here to find. For 17 years, Bermuda’s little train made dozens of trips per day from Somerset all the way to St. George’s, providing riders with the most exquisite views of the island. Sadly, due to low ridership, the Bermuda government shut the railway down in 1948. Fast-forward to 1984 when the government converted the old railway lines into picturesque trails for walkers, cyclists and horseback riders. Those who commit to travelling the entire trail will not be disappointed; the views take in the coastal shoreline, Bermuda’s stunning beaches and natural woodland with canopied paths.

9. Jump Off the Rocks
Bermudians have always used the rocks at Admiralty House, Horseshoe Bay and Diving Board Island as springboards for high dives, back flips and cannonballs, but it wasn’t until a group of young Bermudians created a series of videos called Falling off the Rock that cliff jumping became the “it” thing to do. Since the first video in 2009, Bermuda’s Falling off the Rock videos have earned more than 800,000 views on YouTube. Cliff jumping has always been a part of growing up in Bermuda, but who would have thought it would garner so much attention that it has become a marketing tool of the Bermuda Tourism Authority. It’s proof that nobody can sell Bermuda better than Bermudians.

10. Walk the Paths from Warwick Long Bay to Horseshoe Bay
Although the paths and dunes that separate Long Bay and Horseshoe Bay are popular with horseback riders, walking is the best way to experience the natural wonder of the seaside trails. Getting sand between your toes and breathing in the salty air makes the walk pleasant at any time of the year.

11. Watch the Sunrise on a South Shore Beach
Watching the sunrise with the sand between your toes is the perfect way to spend time with family. Bring along a delicious picnic breakfast of scones and warm tea and enjoy the sounds, smells and sights of Bermuda at dawn. Enhance your tradition with a family photo taken each year. It’s a great way to document family togetherness and a good start to an album that will be treasured forever.

12. Beach It!
Every local has their own favoured sandy shore but this summer, get acquainted with a beach you don’t typically venture to. Whether it be beaching it basic with nothing more than the bare essentials at Horseshoe Bay or beaching it solo on the pristine and secluded sands at Cooper’s Island Nature Reserve, you really can’t go wrong.

13. Watch the Sunset at Whale Bay
Watching the sunset waterside with a lover is a scene synonymous with summer. The dreamiest setting is Whale Bay in Southampton. When the tide is low, bury your feet in the sand and watch the sun set – could there be anything better?