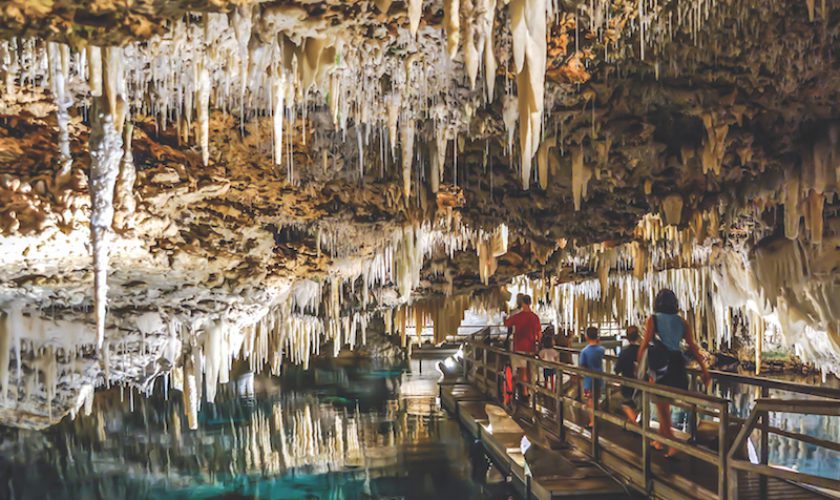 After breaking down the best Beaches, Forts, and Parks, we’re exploring local cave habitats and giving the scoop on which is best and why.

Accessibility – Crystal Caves
The most classic Bermuda cave, attracting visitors and locals alike. The story goes that the cave was discovered by two young boys playing a game of cricket. When looking for the lost cricket ball, they discovered the small opening to the vast cave system. Caves are somewhat like beaches – sometimes it’s difficult to tell where one ends and another begins, and many underwater caves are connected.

Crystal caves is designed to be accessible, with secure walkways that take you through the glittering interior. With special permission, you can also swim in the pristine seawater inside. The cave is very well designed for those with mobility considerations, and those with young children. However, the cave is only open for paid tours, so there is little opportunity to explore.

Exploring – Admiral’s Cave
Admiral’s cave, just a stone’s throw away from Crystal Caves up the hill from Swizzle Inn, is the complete opposite. Admiral’s cave is for those with an adventurous spirit. The climb down includes a short abseil on a rope tied to the rocks, and the cave is pitch black inside with none of the added concessions of crystal caves – no lights, no railings, no tour guide.

This spooky cave is dry for the most part and full of wondrous cave formations. Take care when exploring the cave, because it includes several sharp, slippery drops, into sea lakes fed by the ocean. Flashlights are a must when exploring this cave, and make sure you go with a buddy. 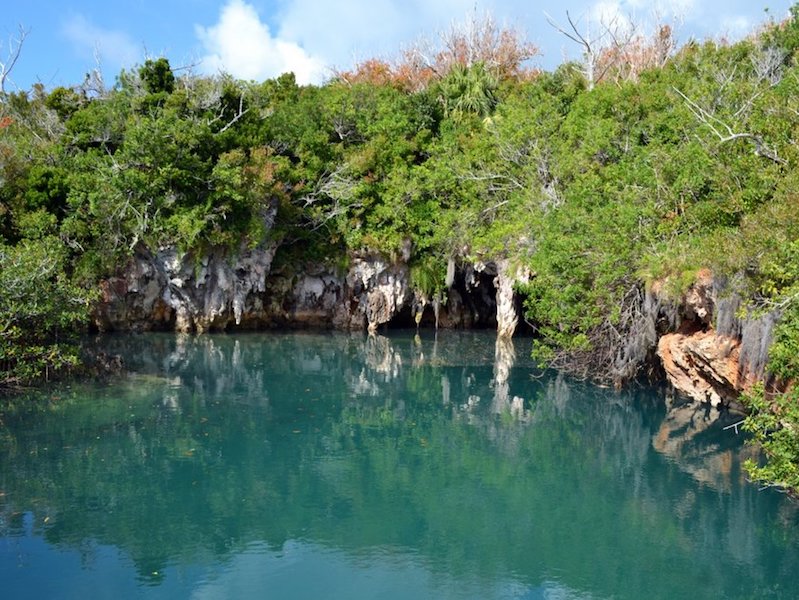 Couples – Grotto Bay Cave
Grotto Bay cave has a concrete walkway and a little ladder to get comfortably in and out of the pristine swimming hole. It has some added lighting in the cave’s ceiling, which makes the swimming experience more pleasurable.

This cave can only be reached on the Grotto Bay resort’s property, so you must be a member of their beach club, or staying at the hotel to get access. The cave is perfect for a cooler dip when ocean water warms up in the high summer, and with a beach bar only a few steps away, it’s the perfect couple’s retreat.

Underground Water – Church Cave
Another resort cave, Church cave stands on Rosewood Bermuda’s property in Hamilton Parish. This beautiful cave is noted for its plentiful limestone formations, and for the fact that it holds the largest underground lake in Bermuda, full of seawater. The Tucker’s point property is riddled with caves below the surface, and also contains Bitumen cave, which is connected underground to church cave.

Unfortunately, Bitumen cave became a dumping ground during the construction process of the Tucker’s Point hotel. Church cave is still accessible on the property, but you must be authorized to explore it.

Ecological Importance – Sears Cave
This charming, shaded sinkhole is actually a collapsed cave. The island of Bermuda is littered with caves, and some are more well preserved than others – Sears cave was once used as a garbage dump. The opening of the sinkhole is large and drops sharply, so the cave is not fenced in for safety reasons.

Some of the rarest endemic ferns in Bermuda survive here, so the cave is accessible by appointment only. The sinkhole is the perfect habitat for caves, and appears a lush oasis viewed from above, full of huge-leaved native cave ferns, which only inhabit three small sites on island. A few other rare species also persist, and the extremely rare Governor Laffan’s Fern has recently been reintroduced there. There is some evidence that the site acted as the only nesting site in Bermuda supporting populations of barn owl, though the sinkhole is currently home to a wild hive of bees.

Mystique – Eve’s Cave
Eve’s cave isn’t much to see standing on the grass, but it feeds an important tidal salt water pond through channels underground to Harrington Sound. Eve’s Pond, located within Shelly Bay park, is currently in the process of being restored.

The Bermuda Audubon Society is working to bring the pond back to its former luster, as before it supported populations of migratory and resident birds. During the dredging of Flatt’s Inlet in the 1940s however, it was filled in with sand, as ponds were mostly seen as an eyesore at that time. Eve’s cave, which leads to the pond, is the longest cave that has been mapped in Bermuda.

Potholing – Subway Cave
A well known cave in Walsingham, this is a completely dry cave full of billowing rock formations. The entrance is hidden in the woodland within the park, and when inside it gets cramped very quickly.

The cave system is extensive, but most of it can only be accessed by crawling on your belly through the maze of tunnels. It’s not recommended that you explore subway cave alone, and with all potholing experiences, tell someone where you’re going before you set off. 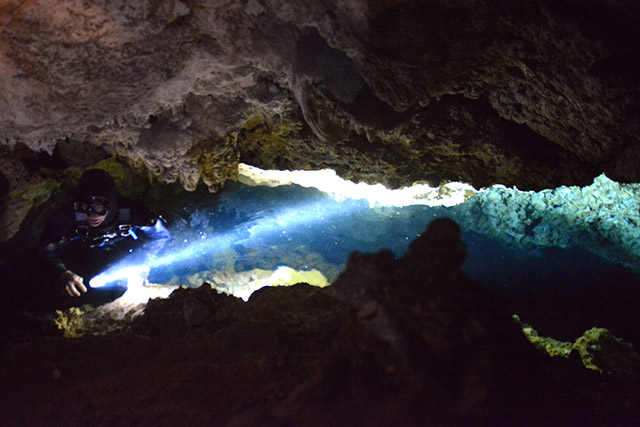 Historical Importance – Jeffrey’s Cave
Located within Spittle Pond Nature reserve, Jeffrey’s cave is named for the slave Jeffrey who used it as a hiding place after fleeing his master. Though some slaves attempted to escape in Bermuda, the island was so small that the vast majority were found – ads in the Royal Gazette were placed asking for the slave’s whereabouts. Jeffrey hid in this well concealed sea cave for over a month, leading his master to believe he had successfully boarded a ship and fled the island.

However, he noticed that a young slave girl would routinely go out after dark with a small package, and, following her one night, found that she was bringing food to Jeffrey at the Jeffrey’s cave site. The cave is still accessible, but you have to drop in to it to get inside. The cave mouth is wide and exposed to the elements.

Diving – Green Bay Cave
Green Bay cave is not for the faint of heart explorer – you will need a cave diving qualification to be able to visit it, and cave diving is notoriously dangerous, exposing divers to a greater risk of running out of air before surfacing is possible, getting lost within the cave, or trapped in a small space. The Green Bay system is over two kilometers long, and has two known entrances, large circular openings in Harrington sound. Smaller passages branch off from the main channel. The presence of massive submerged stalagmites and stalactites indicates that the cave was dry during the Ice Age for the thousands of years necessary to produce the forms.

The cave is full of sponges, tunicates, and hydroids, and is also home to sheltering fish and bottom-dwelling lobsters. It is also home to the wide array of endemic Bermuda cave organisms, like Bermuda cave shrimp. The presence of fresh water runoff in the caves produces haloclines, where fresh and salt water meet and create an underwater illusion due to the different water densities.