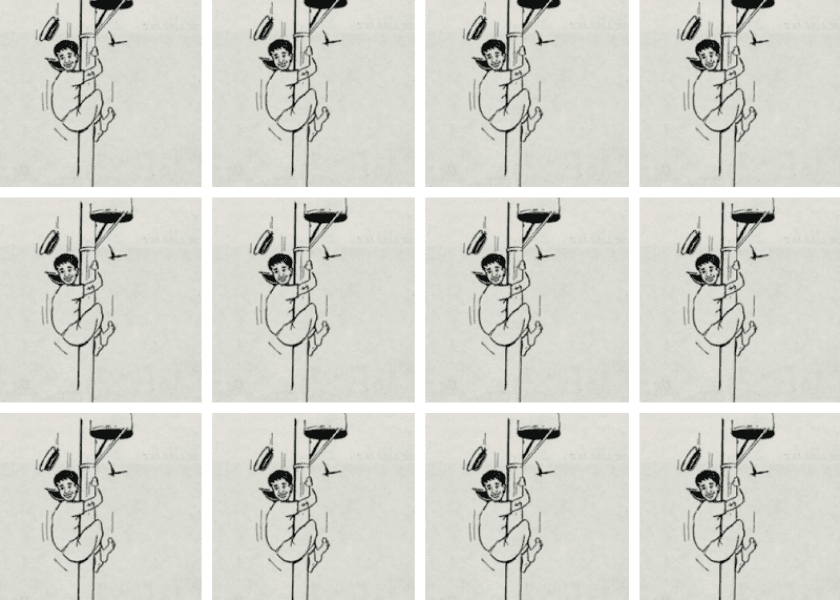 This article was taken from our archives. It first appeared within the Crow’s Nest section of the November 1977 issue of The Bermudian magazine. I appears exactly as it did originally.

Mr. R. D. “Robbie” Outerbridge has done it again! Here he tells the tales of the most prominent Bermudian characters of 1977.

HODGIE AND PIG
Harold Gibbons and I had built five cottages down at the foot of Knapton Hill, quite attractive, old Bermuda-style architecture, but limited when it came to catching rain for the tanks. We decided that a well, hooked up to the toilets, was the answer to all our problems. So I called upon my old friend Campbell Wilkinson, who had vast experience in problems of this nature. “Set your mind at rest my boy. Hodgie will call upon you this very afternoon. A sterling character. I recommend him highly,” he said.

Well, sure enough, Hodgie arrived, terms were agreed, twenty-five shillings a foot, pay-day on Friday. Hodgie inquired as to whether I would have any objections to him hiring his friend Pig, as an assistant. I said none whatever, provided Pig was on his payroll not mine. Anyway, they started work on Tuesday and by pay-day they were down to thirty feet, with only four to go. Come Monday, they hit Mr. Bermuda, solid, hard limestone, and progress dropped to inches. I was delighted to receive a call on Friday: “Come down here Papa, we got water.”

I scrambled up some cash for the payroll, and hastened down to the site — dropped a line and sure enough, up she came wet a foot from the bottom. I called Wilfred White, our plumber, and told him “hook her up — we got water.”
Wilfred calls me on Sunday afternoon: “Robbie everything’s hooked up, but we got a problem.”

“What is it?” I asked.
“There ain’t no water.”
“God Almighty, Wilfred – I measured it myself!”
“Who was it that dug the well, Robbie?”
“A friend of Campbell’s named Hodgie” Wilfred was still laughing when I hung up the phone.

MONKEY RAT, ESQ.
Monkey Rat Rhoda had a quite distinctive claim to fame. To the best of my knowledge, he was the only Bermudian who ever resided in a banana patch for eighteen years.

Monkey Rat was cooling out one day by the Flag Pole, waiting for the fishing boats to come in. Unhappily, a traffic accident occurred – an elderly gentleman was crossing the street and was struck down by a careless bicycle-rider. As it transpired, Monkey Rat was the prime witness. In the course of time, the matter appeared before the Courts, and I am told events went something like this:

Minty on the Bench: “Now Mr. Rhoda, would you kindly tell the court exactly what happened.”
Monkey Rat: “Well Mr. Minty, your honour – this here b’ye weren’t lookin’ where he was goin’, and knocked this poor old man flat on his tail.”
Minty: “Rectum, Mr. Rhoda, rectum.”
Monkey Rat: “Wrecked him your honor – he damned near killed him!”

The offender was duly found guilty and I think that was the only occasion that Monkey Rat ever received the thanks of a Court of Law, plus a small cheque for services rendered.

SIR HOWARD
Sir Howard Trott was a delightful old friend who I remember so well. The telephone rang one day.

“Robbie, what are you doing?”
“Trying to figure out who the hell is stealing.”
“You’re wasting your time my boy. Come on down to my office.”
“Yes, sir!”
“Now see here”, says Sir Howard, “Thad, Yeaton and I are getting deep in the red up there at the American House, and I understand you’re associated with that ginger-headed boy of Waldorf’s (Harold Gibbons). Well, you can have the whole damn lot for nothing, but just be sure and pay the rent.”

Well, we introduced Eddie Amaral into the partnership and embarked on interesting but financially disasterous ventures. With bankruptcy staring us in the face, I suggested to my partners: “To hell with it boys. Let’s put a juke box in, and all booze at 50¢ a crack.”

Much to our amazement this proved to be a magic formula, for our disaster was transformed into a bonanza.

Sir Howard called one day: “I hear you’re doing quite well.”
“Yes sir.”
“Splendid my boy, splendid. You know those Gibbons’ boys have a talent for turning a dollar. Call me if you need a little help at any time.”
Well, I never did, but I shall always remember the kindness of the offer.

BILLY WILLIAMS
Chief of Police in his time – a man of gigantic proportions, it was said that he once stood on the scale at the Phoenix Drug Store which could take up to 300 lbs, and broke it. Laury Trott sent him a bill for repairs.

Billy was somewhat before my time, but I remember him. I was having an ice-cream soda at the Phoenix one day when Billy came in. He demanded a triple serving of vanilla ice-cream and insisted on sherry peppers as a topping.

They still tell a tale of Billy and Waldorf. It seems that Waldorf and Billy were on their way to St. George’s. Waldorf had the reins and apparently was travelling at his usual pace, fast. On passing Mr. Gibbons’ blacksmith shop, down where the Shell Station on North Shore is now located, a front wheel came adrift, fortunately on Waldorf’s side. Mr. Gibbons happened to observe this near disaster, and with loud shouts brought them to a halt. Mr. Gibbons retrieved the wheel, restored it to its proper position, collected his fee for services rendered and observed in parting: “Harold – it’s a damn good thing you had Billy as a passenger.”