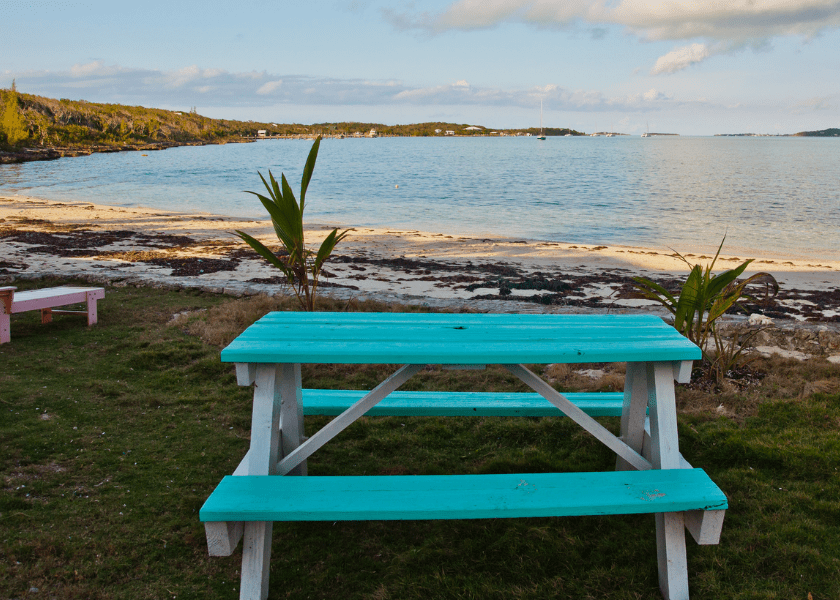 Stuart Hayward contributed a monthly column to The Bermudian back in the 1990s. Although it was over thirty years ago, his memories of growing up in Bermuda are timeless. Mr Hayward wrote Childhood Picnic in July 1991.

Getting out of school for summer vacation was the best event in the school year. In those last weeks before the holidays the classroom sagged with stifling lazy heat that made clothes and furniture stick to the skin.

Who could possibly pay attention?

I was forever staring out the window, mentally off somewhere climbing trees or chasing butterflies, or going swimming.

Going swimming! That’s all I lived for. I didn’t swim very well but that didn’t matter much. Going swimming meant bare feet and near bare skin and adults who were more laid back, for the moment.

Some days we’d go swimming after school. That was a welcome treat, but nothing matched the excitement of the first family picnic of the summer.

Picnics in those days meant catching the bus and making a long trek from the bus stop to the beach. Warwick Long Bay was the favorite because it was the closest.

Before we could go swimming we had to wait while the old-timers found a good plot. There weren’t such things as beach umbrellas in those days and they were pretty particular about having shade during the long hot afternoon — another point in Long Bay’s favour. Once the blankets were spread out and the food unpacked, the kids were set free to hit the beach.

Of course we couldn’t go into the water until there was an adult ready to keep us under watch. They were always scolding us about how we might drown.

A man we all knew had been pulled from the water below Grace Church in Pembroke. I still remember how two men had carted him down the road slung in a ‘chair’ formed by their arms. Most of us had vivid memories of how he had looked and how his family grieved, and the adults did their best to keep them alive.

Finally, we’d get the okay to go in the water. We frolicked every way imaginable: swimming, diving, exploring, chasing, racing, building sand castles, burying each other, coughing and sputtering—full crazy, uninhibited fun. Meanwhile the adults assembled the food and called us to eat once it was ready. As hungry as we were from the trek and the play, some of us still had to be dragged from the water.

At the earliest of these picnics I can remember, there’d be barely enough food to go around. That would have been just after World War II. In the later years the amounts and choices of foods were bewildering. Not only was there enough to satisfy the greediest but there were debates at the end of the day about who was going to carry which leftovers back.

Always there were variations of peas and rice. Some were moist, some dry; some had bits of pork and some chicken; some had bits of vegetables like a Chinese stir-fried dish. There was always one with chunks of the spicy Portuguese sausage, ‘shadeesh.’

There were big pans of macaroni and cheese and sometimes cooked pawpaw or farine pie.

In addition to the coleslaws and potato salads, someone usually brought basic salad ingredients, to the dismay of the kids. Of course I went along with my peers in the groaning about salad stuff, but I confess to really liking the thick slices of red-ripe juicy tomatoes with a dab of mayonnaise on top. (Where have the real tomatoes gone?)

Actually, it really didn’t matter to me how much of what foods were there. I had just two favorites: my mom’s potato salad and watermelon. If I could have got away with it, that’s all I would have eaten.

My mom’s potato salad was special. She didn’t peel the potatoes until after they were boiled. The skins came off quite easily then without taking any of the potato with them, and the potatoes themselves had a richer taste which I assume they absorbed from the skins while cooking. She also put a small can of peas and corn and finely copped onion to her salad.

I don’t know how much difference it made, but she didn’t assemble any ingredients until just before it was time to eat, so we ate the potato salad warm. There wasn’t any portable refrigeration or ice-chests in those days. Even today I prefer unchilled potato salad.

The one thing we could have cold was watermelon — big old watermelon sitting in a big old tub surrounded by chunks of ice which had been whacked off of a large ice block. We’d be given a few chips of ice in our cups of drink, but as I recall they were never enough. More than once my had was caught fishing under the burlap covering for a piece of ice small enough to be spirited away.

Those first mouthfuls of watermelon were exquisite. I’ve since surmised that the flavour was enhanced by the salt from the ocean which had dried on our hands and lips. We’d eat as much as they’d let us, which hardly ever seemed like enough, but was often too much.

Watermelon was such an entertaining fruit. The seeds were great for spitting. We’d have spitting contests for distance and accuracy and at each other — though the adults frown on any spitting. And while a few elders were quite dainty in their eating of watermelon, we kids could piggishly smear our faces right into it as we ate — and get away with it.

Even the watermelon rind was good for hurling at each other, so long as we did it out of sight of the adults.

Then we were ready to swim again.

However, the adults wouldn’t let us go swimming until an hour after we had eaten. The reasons they have to our inevitable queries ranged from food being ‘still heavy in one’s stomach’ which would lead to drowning, to conserving one’s energy for digestion. My mom favoured the latter, which meant that I couldn’t even go galloping up and down the beach until my digestion had some quiet time to work.

The one or two times I managed to elude her oversight, I usually paid for my winning. Invariably I felt uncomfortable, unpleasant and undignified as I coughed up all or part of my lunch.

The adults generally didn’t go swimming until late in the afternoon when the sun’s heat slacked off a bit. It seemed to me there was a direct relationship between swimming and grumpiness. Those who had the most fun in the water were the least grumpy on land, and vice-versa. For good reason, I stayed out of the reach of the one’s who didn’t go into the water at all.