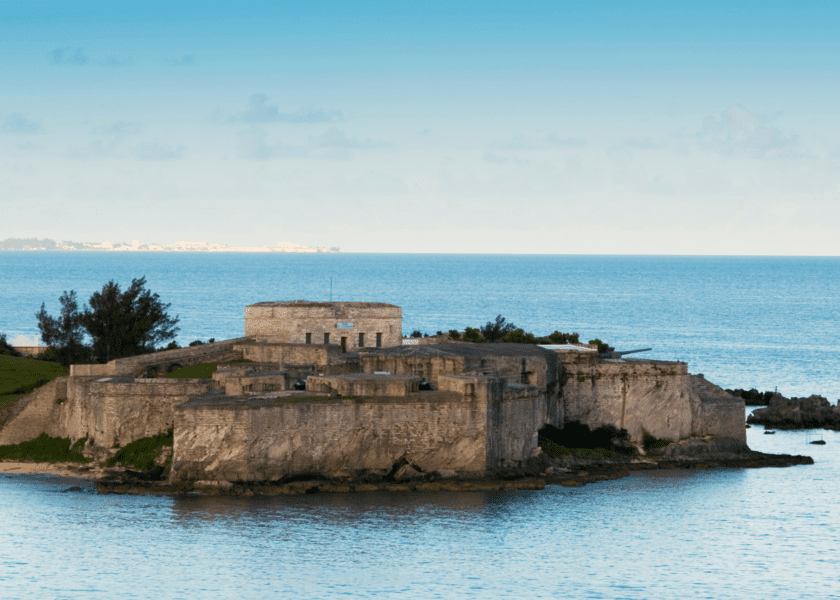 Rising from a green hilltop and overlooking the vast expanse of turquoise ocean, Fort St. Catherine is Bermuda’s largest coastal artillery and at the heart of the island’s history and colonization.

Fort St. Catherine is perched on the most northern tip of Bermuda. This UNESCO World Heritage Site stands along the shore overlooking the spot where the Sea Venture shipwrecked in 1609, and where Sir George Somers and his crew first came ashore on the beach below. The fort has been renovated numerous times and was finally converted into a museum in 1951. Steeped in rich history and offering expansive ocean views, this parcel of land marks the beginning of the Imperial fortress colony of Bermuda.

Shortly after the original settlers arrived onto Bermuda’s shores in 1609, a smaller wooden fort was built  at this site by the island’s first governor, Richard Moore, in 1612. Today, an expansive stone fortification stands proudly in its place. The purpose of the fort’s eastern coastline position was very tactical; foreign vessels who made their way into the main channel around St. George’s Island had to travel nearer to shore due to the constraints of surrounding reefs. Incoming vessels could then be targeted with ease by five defending cannons that could release shells weighing up to 400 pounds.

Fort St. Catherine has seen at least five renovations in its time before it fell into disuse in the first half of the 20th century. It subsequently opened to the public as a museum and national park in 1951, and the Department of Parks has since then completed modern refurbishments making the fort more accessible for the public to enjoy.

Interestingly, the grounds of the fort were also once used as a stage for theatrical plays shortly after it opened as a museum. In fact, an open-air production of Shakespeare’s tragedy Macbeth was performed here in 1953 starring Academy Award-winning actor Charlton Heston. The performance, directed by Burgess Meredith, involved a variety of daring theatrics. According to Heston’s biography, during the first performance of Macbeth in Bermuda, his tights caught fire causing serious burns to his legs.

With the recent development of the St. Regis hotel, many residents worried whether this attraction and beach would still be open to the public. Fortunately, the Desarrollos Hotelco Group has made it a priority to preserve public access to these historic areas. The fort is open to visitors on weekdays from 10 AM – 4 PM with admission rates of $7 for adults, $3 for children (aged 6-15), and those aged 5 and under can enter for free. St. Catherine’s Beach also known as Gates Bay Beach, which accompanies the land of the fort, is also open for the public to enjoy.  The walls of the fort that line the coastline of the bay act as a great snorkelling spot where you will find coral habitats and residing marine life.