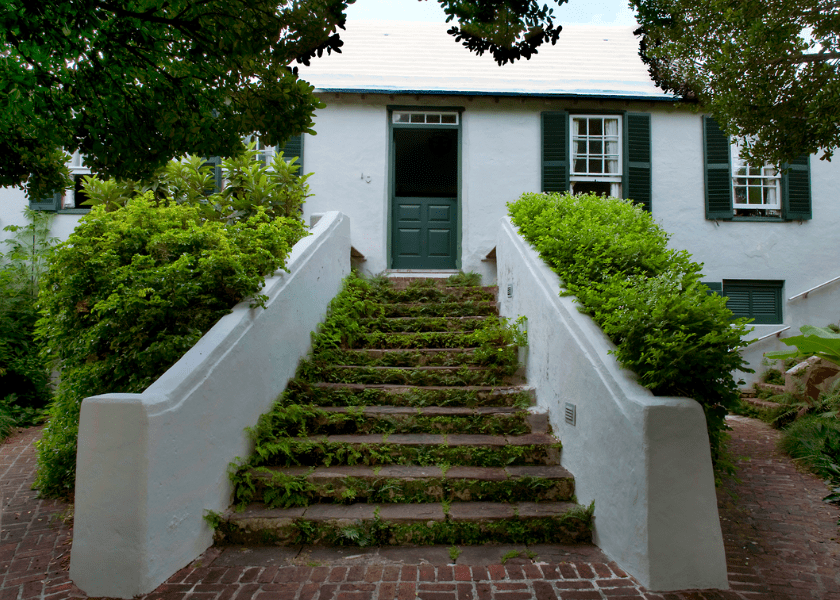 Discover the History of Mitchell House

If anyone were to write a rock song about the iconic Mitchell House, we think it would be called ‘Stairway to History’.

The Georgian ‘welcoming arms’ of the house’s front steps ushers all the visitors who enter to take a trip into the past. Mitchell House was built in 1730 and its original architecture and décor has largely been maintained over the centuries. Mitchell House was acquired in 1920s by the recently formed St. George’s Historical Society and from that point on it became the headquarters for the St. George’s Historical Society Museum.  This purchase is largely to thank for the continued preservation of its historic architecture.

The house was built in 1730 by the wealthy St. George’s merchant, Major Walter Mitchell, for his nephew William. There has been many different residents and owners of this property but the most notable  owners were a successful black Bermudian couple in the 19th century. The couple ran a restaurant in the town of St. George’s called The Gun Tavern, which was very  popular with sailors and soldiers. Their economic success meant they could afford this large property and even owned several enslaved servants. It was very rare for Black business owners to reach this level of success in the 1800s.

As house changed owners, various additions were made to its original 18th century structure. It has been a home to families, has been used to run a private tutoring business, as well as a hotel and tavern. ‘The Commercial Hotel’ ran out of the house from 1900-1914. It was owned and operated by George C. Wailes, who had come to Bermuda in 1883 as a soldier in the 2nd Battalion, 84th York and Lancashire Regiment. His Bermudian-born son inherited the house, also named George C Wailes. Wailes had been a Bermuda Police Constable and served as a Corporal in C Company of the 2nd Battalion of the Lincolnshire Regiment in the First World War. He was wounded at Ypres on the 17th of November, 1914. He was wounded another seven times before he was medically discharged, and he became the first Bermudian serviceman to return home from the war in April, 1915.

In 1922 the St.George’s Historical Society acquired the house and it now stands as a museum. In the house you will find a pristinely preserved colonial-era kitchen with various cooking implements that would have been commonly found in an 18th century home. Among them are examples of traditional Bermudian utensils used by the early settlers like palmetto baskets and calabash dipping gourds. Other notable artefacts displayed at Mitchell house include: a letter from George Washington, a 300-year-old bible, Native American axe heads, and knives for whale flensing. In the garden, you will find a well that has been there since the 1820s and was likely the well used by the entire town of St. Georges in the 17th and 18th centuries for fresh water.

The cellar is home to a vintage printing press and an artist’s studio. The replica Gutenberg press was used by Bermudians more than 300 years and is still able to produce printed material. The printing press was imported to Bermuda in 1783 by Joseph Stocktdale for the Featherbed Alley Printery, which he owned and operated from the cellar of his house on Printer’s Alley. It was the first printing business of Bermuda, and published the first island’s newspaper, the Bermuda Gazette in 1784. You can see early editions of the Bermuda Gazette on display in the museum.