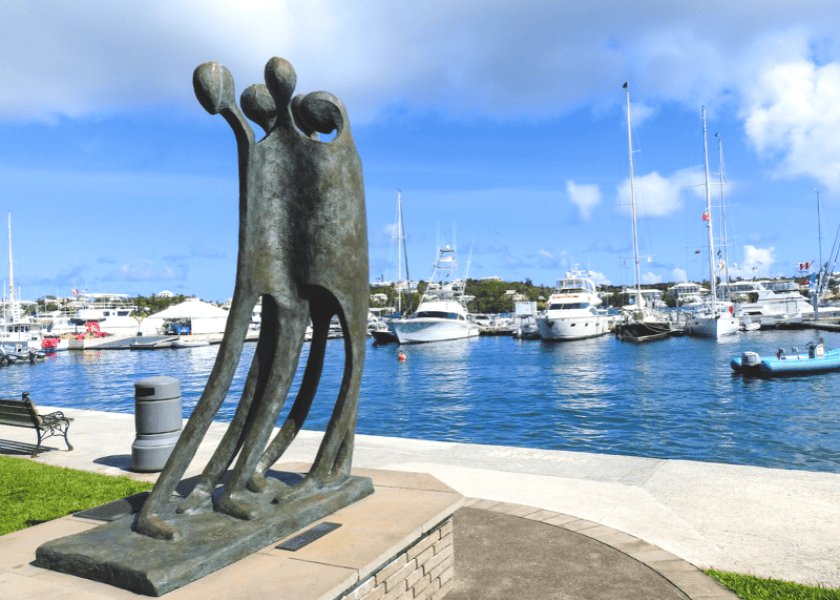 It is estimated that around 60 percent of Bermudians have African ancestry with many directly descended from persons brought forcefully to the island from the West Indies and West Africa between the seventeenth and nineteenth centuries.

Today you can visit Bermuda’s African Diaspora Heritage Trail, which serves both as a reminder of Bermuda’s active role in the transatlantic slave trade and marks the places where much of Bermuda’s black history was made. This winter, consider exploring and discovering parts of the African Diaspora Heritage Trail you might not be familiar with. If you’re well acquainted with the historic trail, maybe focus your time on introducing someone else to it: there’s always something new to learn or discover.

1. The Sally Bassett Statue
On June 21, 1730, Sally Bassett was burned alive for allegedly trying to poison her masters. At the time it was common for whites to claim they were victims of poisoning by the persons they enslaved and after a white man by the name of Thomas Foster, his wife, Sarah, and an enslaved female named Nancey reportedly took ill, Sally Bassett found herself under investigation and subsequently charged with their attempted murders. On June 1 of that year, Bassett’s trial began. Bassett denied the charges to the very end but on June 21, she was burned to death at Crow Lane. Since then, Bassett has been seen as a symbol of defiance and resilience and legend has it that when her remains were cleared from the stake, the Bermudiana (the tiny purple bloom we know today as Bermuda’s national flower) was discovered to be growing from her ashes. Today, a 10-foot statue of Sally Bassett sculpted by Carlos Downing is located in the front garden of the Cabinet Building in Hamilton (105 Front Street). 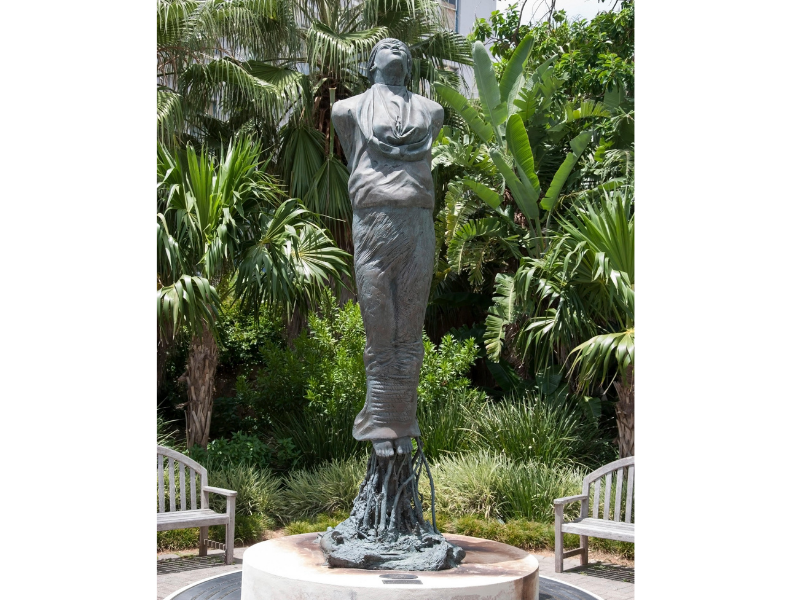 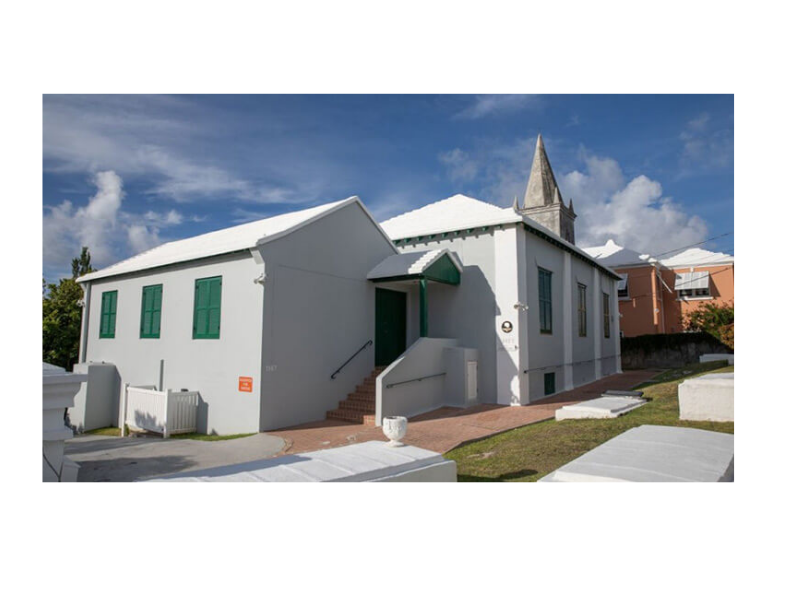 3. The Home of Mary Prince
Mary Prince was born to an enslaved family of African descent on October 1, 1788, at Brackish Pond, Bermuda. Throughout her life she was bought and sold many times, each one of her enslavers subjecting her to violence and emotional abuse. In 1828, Mary Prince convinced her then owner, John Adams Wood, to allow her to travel with him to London under the guise that she was seeking medical attention for her rheumatism. But Prince had a plan: As slavery had been abolished in England in 1807, Prince decided she would escape Adams Wood and seek refuge with Thomas Pringle, one of the founders of the Anti-Slavery Society. Once with Pringle, Mary Prince began telling her story, detailing the hardship and torture she had endured. Recognising the importance of Prince’s story, Pringle hired a transcriber to record Mary’s words and in 1831, her autobiography, The History of Mary Prince, A West Indian Slave, was published; it was the first book of its kind and remains to this day the only first-hand account of the brutalities of enslavement in Bermuda. The History of Mary Prince is acknowledged to have played a significant role in the abolishment of slavery throughout the British colonies.

Today you can visit the home in which Mary Prince lived (6 School Lands Lane, Pembroke) and the Mary Prince Emancipation Park located in Devonshire. 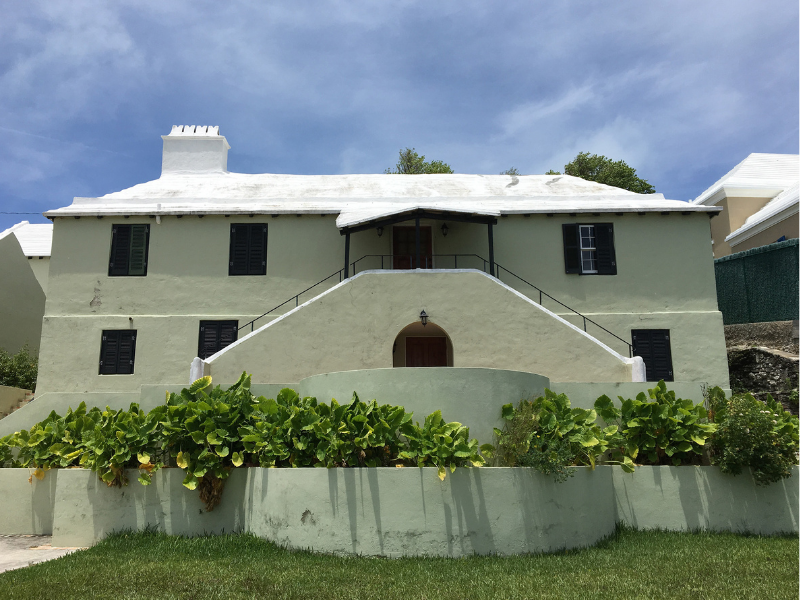 The home of Mary Prince

4. Barr’s Bay Park
In 1835, American schooner Enterprise found its way to Bermuda after being blown off course by a storm. Slavery had been abolished in Bermuda the year before, so the 78 enslaved men, women and children on board were given the choice to either return to the United States (where they would be enslaved once again) or remain in Bermuda and be free. Most chose freedom in Bermuda and descendants of those men and women still live here today. Visiting Barr’s Bay Park today, you will see a statue called We Arrive sculpted by Bermudian artist Chesley Trott commemorating the historic event. 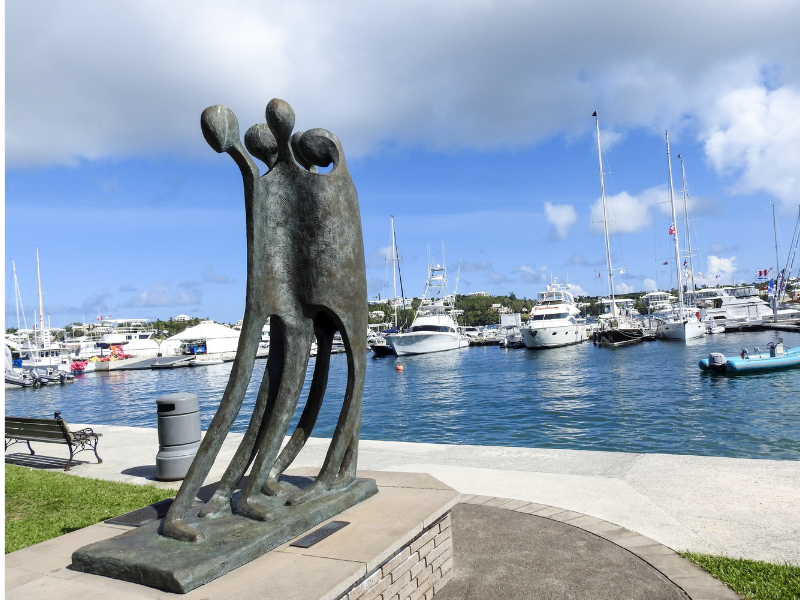 ‘We Arrive’ Statue stands looking out over the Atlantic

5. When Voices Rise Statue
In 1959 racial segregation in Bermuda was still the norm, with blacks barred from entering local hotels and sitting wherever they liked in restaurants and theatres. Inspired by the social progress made during the Civil Rights Movement in the United States, an anonymous group of black Bermudians—called the “Progressive Group”—began envisioning and working together to figure out how to bring change to the island. They put together a plan to enact a Theatre Boycott, the concept being that blacks would cease to attend local theatres until segregated seating was done away with for good. After two weeks, local hotel owners decided to change their rules and allow blacks in, with theatre owners following suit not long after. By July 2, 1959, black Bermudians were welcome everywhere.

Today, the identities of the original “Progressive Group” members are known and celebrated with a statue called When Voices Rise. Sculpted by Bermudian Chesley Trott, the statue sits in Wesley Square at the corner of Church and Queen streets in Hamilton. 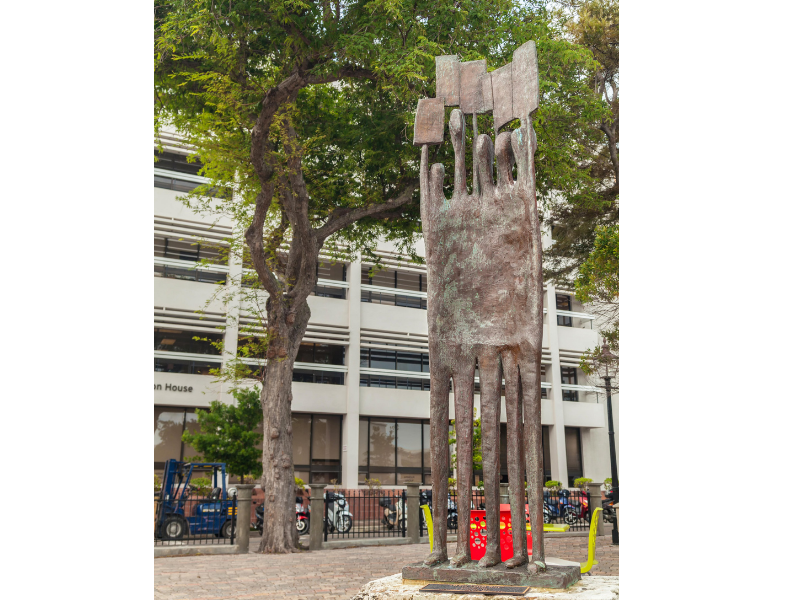 6. Tucker House Museum in Barber’s Alley
Built in the late eighteenth century, Tucker House, located on Water Street in the Town of St. George, was once home to a barbershop. In 1862 a young man by the name of Joseph Hayne Rainey travelled to Bermuda with his family to escape the atrocities of the American Civil War. Having arrived in St. George’s, Rainey’s father opened a barbershop in the cellar of Tucker House, which is how Barber’s Alley got its name. In 1865, the family moved to Hamilton after yellow fever broke out in St. George’s. There, Rainey worked at the Hamilton Hotel as both a barber and a bartender. In 1866 Rainey returned to the United States, setting up a home in Charleston, South Carolina. By 1868, he had entered the political arena and became the first black member of the US House of Representatives and the United States Congress. 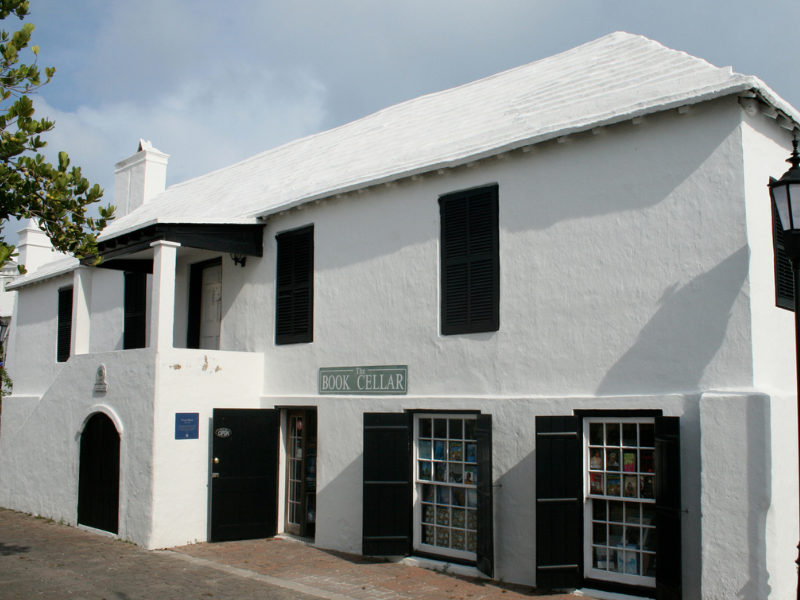 Steps lead up to the Tucker House Museum

7. Pilot Darrell’s Square
Another prominent St. Georgian was James Darrell, who was enslaved most of his life. At the age of 47, Darrell piloted the 74-gun HMS Resolution through Bermuda’s network of treacherous reefs and was granted his freedom as a reward for his service. In the years that followed his freedom, Pilot Darrell became the first known black person to purchase a home. He also lobbied for more freedom and higher wages for pilots. Today, you can visit Pilot Darrell’s House at 5 Aunt Peggy’s Lane in St. George’s and visit his grave in the graveyard for free blacks and slaves at St. Peter’s Church. 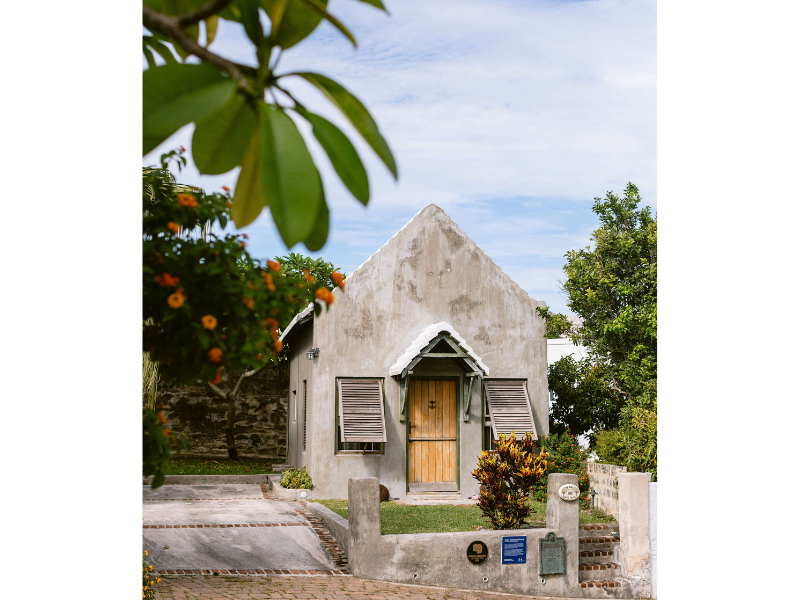 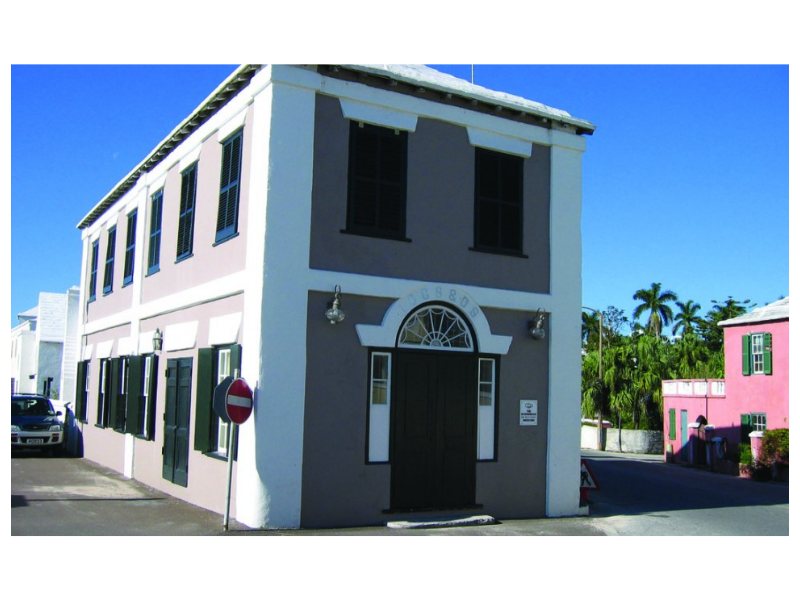 9. Jeffrey’s Cave, Spittal Pond
So heinous were the realities of enslavement that it was fairly common for enslaved persons to flee in search of freedom. When this happened, enslavers would advertise in the Royal Gazette a reward for the return of an enslaved person. One man by the name of Jeffrey escaped his captors and lived inside a cave at Spittal Pond for one month before he was recaptured and forced back into enslavement. Today, you can visit Jeffrey’s Cave, which still bears his name, which is located at Spittal Pond Nature Reserve in Smith’s Parish. 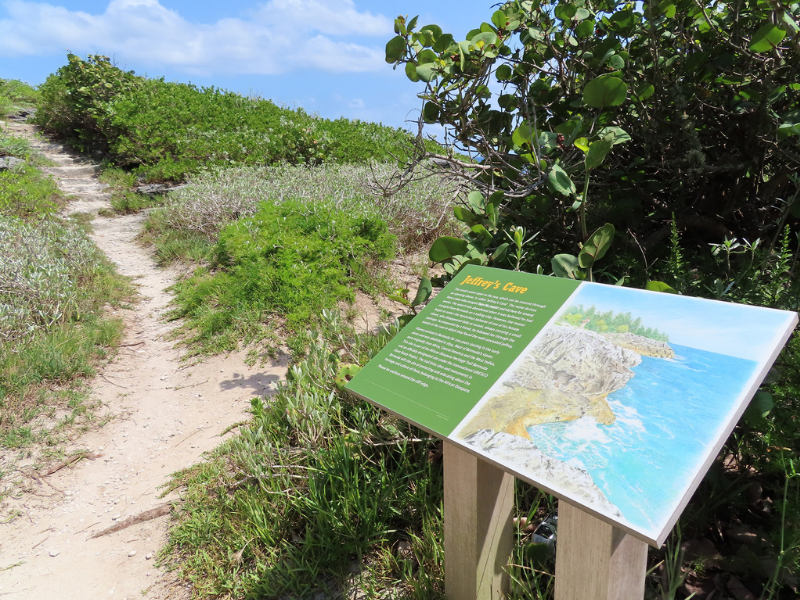 Signage in Spittal Pond marking the path to Jeffery’s Cave