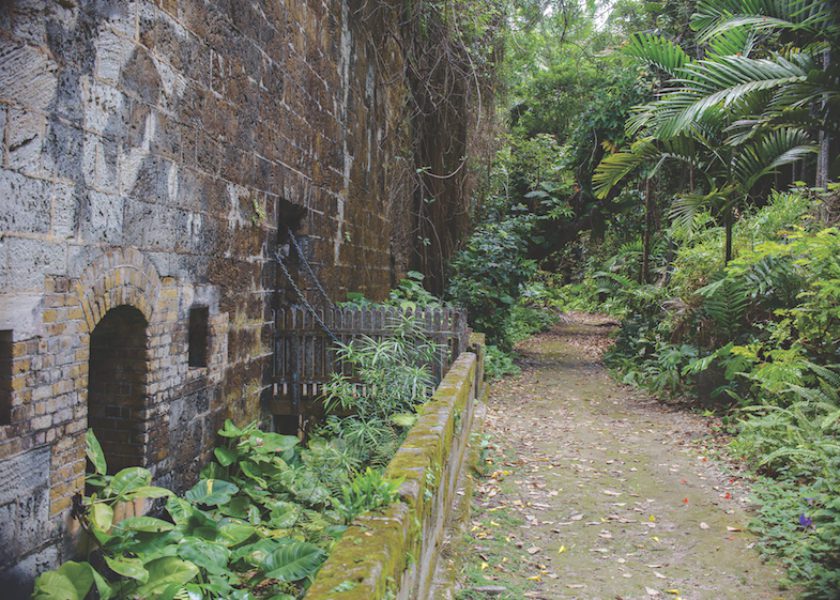 Elizabeth Jones explores the heart and history of Fort Hamilton and its famous moat.

The Moat
Our grandson is the first to notice the cannon that heralds the way to Fort Hamilton. He rushes towards it, points out that he’s seen a cannon just like it in St. George’s, and pats the black painted metal. Then as we make our way towards the entrance, he notices the wooden bridge, once a drawbridge, that leads to the huge double doors and his eyes light up. He tugs us onto it and then stops to look over the rail and down to the moat. We look too—at the thick, grey tendrils of Spanish moss hanging from the branch of a large tree, ghostly in the sunlight, and then at the climbing tower of philodendron leaves, so dense it’s impossible to see what’s supporting them. But we can see steps leading down to the moat and so can he.

“I want to go down there,” he says firmly, much to my relief. It has just occurred to me that taking an adventurous four-year-old to explore a fort with some vertiginous drops around gun emplacements is not the greatest idea. So we cross the bridge, enter the fort and descend the steps leading down to the botanical garden the moat has hosted since the 1960s. Immediately we find ourselves in a steamy circular strip of jungle wonderland. All sorts of bamboos, palm trees and spice trees rooted in the moat seem to push their heads higher and higher in search of sunlight. The textures of their barks are beautiful with their circular markings seemingly carved into the wood. I take pleasure in the variety of variegated leaves of philodendrons, crotons and coleus as well as the intricate tracery of massive ferns. Our grandson, a natural geographer, points out that the red bridge we walk under is the same one we walked over just a few minutes ago. He is in seventh heaven finding sticks and fronds on the floor of the moat and long hanging roots that sway in the breeze. Scarlet fallen poinciana blossoms carpet parts of the ground.

I am remembering a story told in Bermuda Journey that I cannot tell him until he is much older although I do point out that the moat forty feet deep was dug out of limestone by hand by quarrymen. The story concerns two lovers who came to a bad end. According to William Zuill, in 1869 when the moat was being dug, a man found the body of a woman on a road near Pembroke dump. Her throat was cut. Nearby was an empty noose hanging from a tree. The next day quarrymen working in the moat found a coat hanging from a rock. It belonged to a fellow quarryman. He and the dead woman had been lovers, although she was married. In his coat pocket was a confession. Apparently, the two had a suicide pact. After he cut her throat, he then unsuccessfully tried to hang himself. “But this failed,” Zuill recounts, “and then, remembering his work, he thought of another way. Up the hill he went to the fort, climbed down the ladder into the moat and set to work. There was a huge block of stone already cut out and ready to be thrown over the following morning. This he remembered and knew it would serve his purpose.”

Apparently, he worked at the stone to make it move. “Then with gathering speed it rushed toward him where he, lying in its path, calmly waited for death!”

I can’t help wondering about this. Do suicide pacts often happen outside tragic plays and operas? To me it’s more likely that they had a row, after which he killed her in a fit of rage and made the suicide pact story up.

Whatever the truth, in those days he would not have seen this amazing botanical garden. The fort was originally used by the British Garrison and then as the headquarters for the Bermuda Volunteer Rifle Corps from the mid-1890s until the mid-1930s. When it was abandoned by the military, Zuill says there was a suggestion to turn the abandoned fort into a reservoir, “…or alternatively into a lovely tropical garden.” 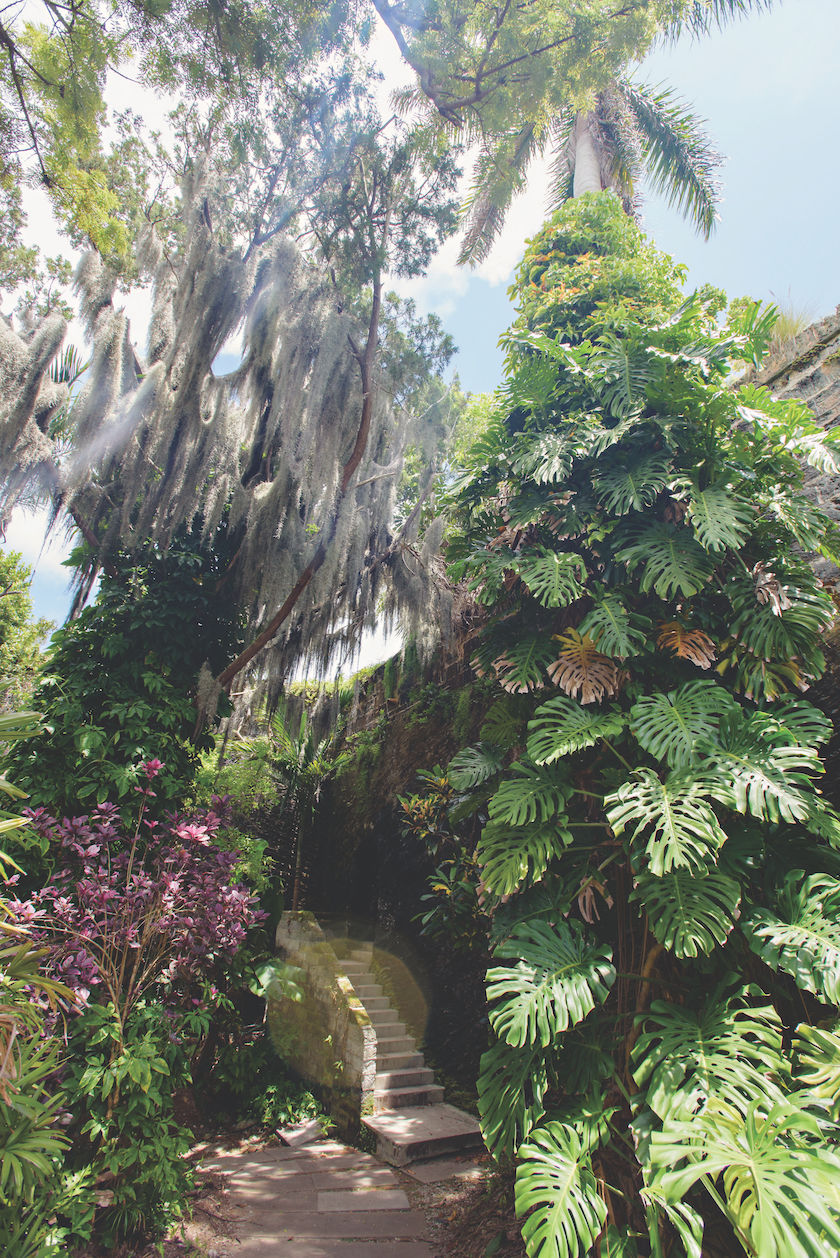 “Meanwhile the rich, wild growth which flourishes in the damp shade indicates Nature herself is intent upon the latter plan,” he says. Sure enough the decision to create a garden was made and the work was carried out by former Parks superintendent, George Ogden, who retired from the Corporation of Hamilton in 2001.

Our grandson spots stairs leading down to the network of long, underground tunnels which originally were where munitions were replenished. I don’t think these are a good idea for a four-year-old to explore either. But when he is a lot older, we will certainly bring him back. A friend remembers the fun her boys had playing in the lit tunnels. Fortunately he is distracted by a catbird calling high up from a tree. We gaze up at the canopy of leaves shielding us from the glare of the sun. And now, he reminds us, it’s time for a snack. We’ll keep the fort for another day.

The Fort and Ramparts
Once again we are on the drawbridge admiring the swathes of Spanish moss. But this time, walking through the double doors and past the guard house, we ignore the steps down to the moat and take in the manicured lawns on the multi-levels of this pentagonal fort converted to artfully arranged quarry gardens which feature all sorts of shrubberies and trees. A line of stumpy junipers (Juniperus chinensis “Torulosa”) with fragrant needles and twisty branches particularly appeals as does a plant display augmented with decorative “Grecian” pillars. Poincianas, hibiscus, match-me-if-you-can, palms and magnolias complement the limestone walls and pits. Only the rifled muzzle loaders (RMLs) emplacements give the clue the fort was built for military purposes. 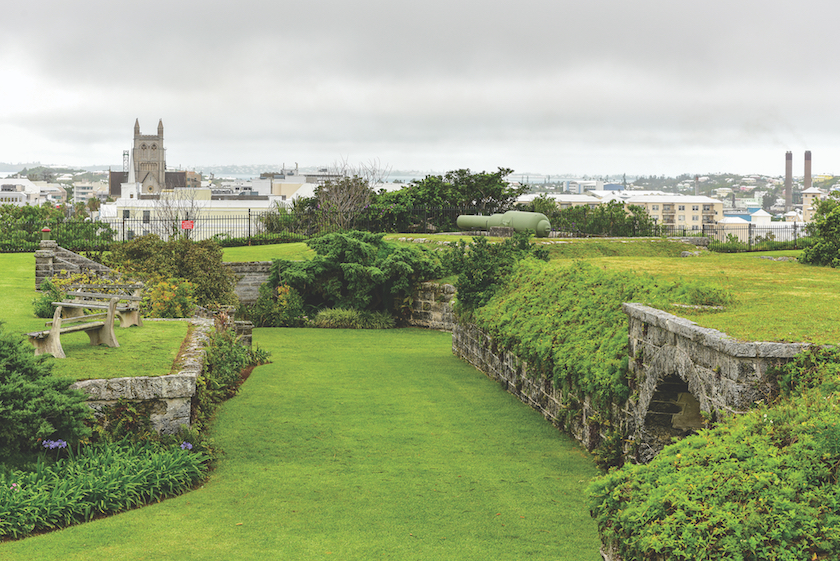 As a park, Fort Hamilton has proved an ideal setting for many social events, including three Shakespearean productions: The Tempest, As You Like It and Macbeth, the ramparts being an ideal backdrop to King Duncan’s castle. The fort even helped out unexpectedly with the casting. Actors in The Tempest and As You Like It were joined by a resident cat who greatly enjoyed appearing before an audience at unexpected moments. These days Fort Hamilton continues to be a popular venue for parties and gatherings. At noon each Monday from November 1 to March 30 the Bermuda Pipe Band, supported by Scottish Highland dancers, performs the Skirling Ceremony in the grounds.

The reason forts are often popular attractions is that their positions were always chosen for the views they could command and Fort Hamilton is no exception. It was built as a means of protecting the Royal Naval Dockyard from American invasion, just a few years after the end of the American Civil War. According to the plaque by the guard house, by the time work stopped here in 1888 the fort was left unfinished. And not one shot was ever fired at an enemy. Something happened to one of the guns, though—it has a crack in it.

So a walk round the ramparts is a must for panoramic views of Hamilton Harbour and of the city itself. We look over to White’s Island and the Dinghy Club’s jetty on the left and Salt Kettle’s peninsula on the right. The new John Swan Building dominates but across the harbour stretches the blue strip of the south shore. We can follow the curve of the island all the way to Boaz Island but from there the tips of Dockyard and Spanish Point are obscured by the multiple white rooftops of houses and buildings. Then we make our way slowly to the western side of the ramparts and looking over the tall fence protecting us from the 40-foot drop and beyond the Brazilian pepper, palmetto and oleander, we have almost an aerial view of Hamilton. The difficulty is to figure out what could have been seen while the fort was under construction and during successive years. In the 1870s the views would have been far more rural of course. And the distinctive twin towers of BELCO we can see now certainly wouldn’t have been there since the company, let alone the towers, wasn’t a reality until the first decade of the twentieth century.

But what of the many churches, not to mention the civic architectural landmarks? Today, despite the multi-storey office buildings that have burgeoned since the last decade of the twentieth century, the Anglican cathedral is still tall in the sky and we can just see the top of City Hall and a clearer view of the Sessions House. In the 1870s of course, the skyline would have been quite different. Instead of the present cathedral, built between 1886 and 1905, redcoat soldiers at the fort might have seen the older Trinity Church on the same lot. They could even have witnessed the fire that destroyed it in 1884. The Sessions House was there but possibly not visible since the distinctive red terra-cotta designed clock tower was added to the building some years later in 1887 to commemorate the Golden Jubilee of Queen Victoria. And it was not until 1960 that our lovely City Hall designed by Wil Onions was officially opened.

The redcoats could also have seen St. Andrew’s, built decades earlier in 1843, although the tower was not added until 1950. Until quite recently we could see the “pink church” too. But today, the church is obscured by an office block (home to the People’s Pharmacy). As for St. Teresa’s whose tower we can just see in front of the BELCO towers, it wasn’t in existence until 1931. The Wesleyan Methodist Church was partially built by 1881 but again the spire, which from our vantage today is like a sideways view of a triangular sail, wasn’t added until much later—1965. The skyline has ever been changing. Perhaps, however, the greatest change is the purpose of the fort. Once built to offer protection for the city, now its greenery gives us sanctuary away from it.