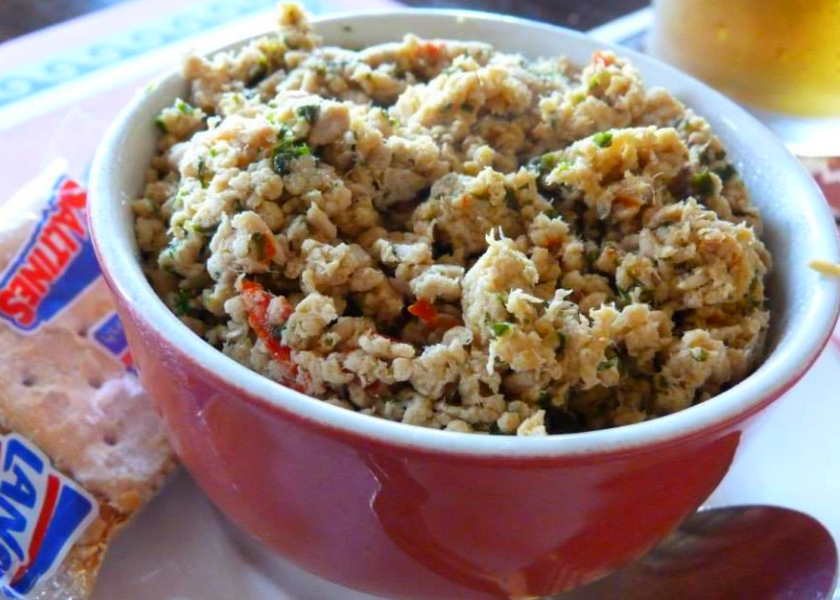 A grey-haired woman in twin set and pearls beams out at my husband and me from our TV set. “We had the best foods growing up on St. David’s,” she says before introducing the two elderly women sitting behind her as her mother and her auntie. Both look old enough to have dated Methuselah. They beam at the camera. These two are from St. David’s, once an isolated island community until a bridge linked St. David’s to the rest of Bermuda. Now it’s only isolated by custom and conceit.

Auntie takes up the theme of hearty eating. “We never went hungry.” Her sister nods. “Best food in the whole wide world.” Then silence. We stare at them. They stare back at us. Auntie breaks the long silence. “We had shark hash.” Her sister’s head nods like a plastic bobbing dog. “And suck-fish stew.”

I turn to my husband and my eyebrows rise. He shrugs. As if the old woman on the TV can see me, she clarifies: “We scraped them off rocks and stewed them long and slow.” I mouth “off rocks?” My husband is transfixed. Another nod from her sister, who grabs her arm and adds, “We had dried mullet roe and guts for breakfast.” All three women look ready to swoon. When the narrator repeats, “The best food in the whole wide world,” we shut off the TV.

I remember the first time we had shark hash in Bermuda. A colleague of my husband, a St. David’s islander and renowned shark-hash cook, made a batch especially for us. One bright, white-hot day, he brings us a container and two plastic spoons. When the lid is taken off, birds flying high overhead veer sharply and flutter out of sight. We hear windows slamming shut up and down the street.

I peer at speckled grey mush. My husband, who’s been known to eat roasted witchety grubs in the Australian outback and dried mopani worms in Africa (including the fuzzy feelers and eyes), takes a spoon and digs in. I dangle my spoon over the container and skim close to the top. It comes up as pristine as it went in. Our friend leans toward me as if he is ready to brag about grandchildren. “Take more. Can’t get the full flavour unless you dig in.” He guides my hand until the spoon scoops full.

He glows and I ask him, “Do you make this hash often?”

“Got a bit of a clingy odour to it.” He puts the container right under my twitching nose. I reel back.

“What part of the shark do you use?” I jiggle my spoon but nothing slithers off. “I thought shark wasn’t good eating.” I’m mesmerised by the congealing mass heaped on my spoon.

“Depends on how it’s cooked.” With that, he pulls out another plastic spoon from his back pocket and plows into the container. “For shark hash, you use puppy sharks-about 5 to 10 pounders.” He beams me another of those St. David’s islander smiles. “Get them off the Southwest Breaker. Gut them, cut out their livers and cook for 3 days.” He makes another furrow in the mush. His spoon bends from the hash’s weight. “Take the liver, fry out the oil and with what’s left you make a barometer.” A barometer? Startled, I look at him but then decide I’d rather not know.

“What else is in it?” If I keep talking, he won’t notice I’m not eating.

“Chilli peppers. Called bird peppers here. Little pellets of pure hell.” I lower my spoon at an angle but the heaping mass won’t slip off. “And nasturtium leaves. Supposed to taste like watercress.” He’s got a mouthful but dips into the container again. “Some pour prickly-pear syrup over theirs.” He looks at me and I raise the spoon to my lips.

The hash disappears as if both men are eating double-Dutch-chocolate ice cream.

“Family secret,” he says with mouth full. “You can go to the Black Horse or even to Dennis’s and order off their menu, but this”-he points with his spoon at the almost empty container-“this recipe is God’s gift to St. David’s islanders. Family secret.”

The container is clean except for a little puddle on the bottom. He asks if I want the rest. “Freezes good, too.” Then he shakes his head sorrowfully. “Never have enough left over for freezin’ no matter how many livers I boil up. What’d you think? Good, isn’t it?”

Cornered, I plop the spoon in my mouth.

“Delicious!” my husband says, scraping the side of the container and licking his spoon.

“Can’t get better,” says our friend, snapping the lid shut.

Long after my eyes, brain and muscles cease functioning, the memory of shark hash remains with me. But don’t take my word for it. Just pop down to St. David’s and ask for any of the locals. One of them might part with a bit of their treasured shark hash.