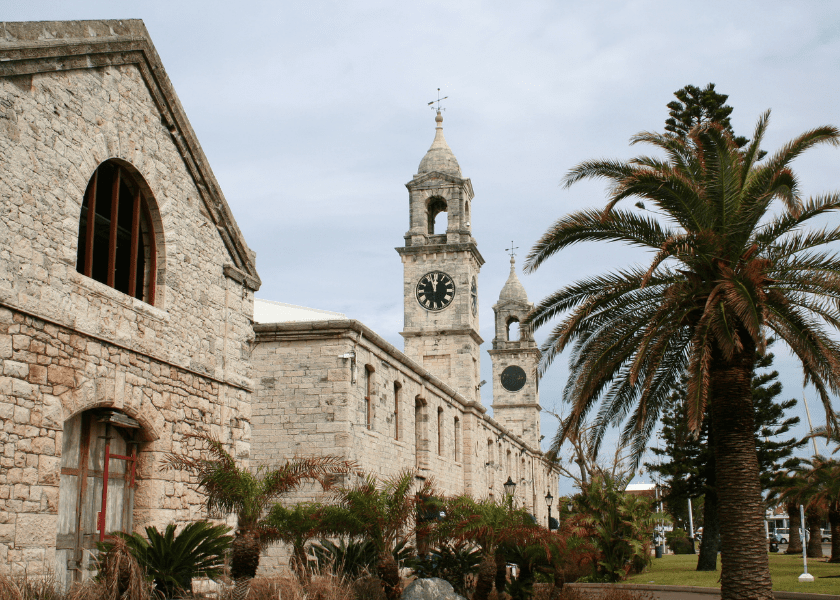 On the far western tip of Bermuda, the Royal Naval Dockyard sits in stately grandeur. Known simply as “Dockyard” by locals presently, these mighty buildings once served as headquarters for England’s Royal Navy. Today, the area is a port for mega cruise ships and welcomes visitors with attractions, shopping, and dining options.

1. Dockyard was built in the early 1800s to be Britain’s strategic defence post in the Atlantic. It was established after the United States gained independence and Britain found itself with neither an anchorage nor a major ship-repair yard in the western Atlantic. Also, Napoleon was surfacing as a serious threat and British ships were increasingly vulnerable to pirate attack.

2. The work constructing the Royal Naval Dockyard was carried out by enslaved individuals and English convicts labouring under poor conditions and living on prison ships. Thousands of workers died before the project was completed.

3. Between 1816 and 1818 Yellow Fever, believed to have been introduced by crewmen from two vessels arriving from Antigua, ravaged Dockyard. Those who fell ill were taken to the Naval Hospital on Port’s Island.

4. The Royal Navy abandoned Dockyard in 1951, although they maintained a small presence there until 1976 and held title to the land until 1995.

5. In 1980, a group of enthusiastic citizens convinced the government to renovate the historic centre into a facility that would attract tourists, commerce, and housing. Thanks to $21 million in public funding and $42 million in private investment, the area was transformed into a tourist destination.