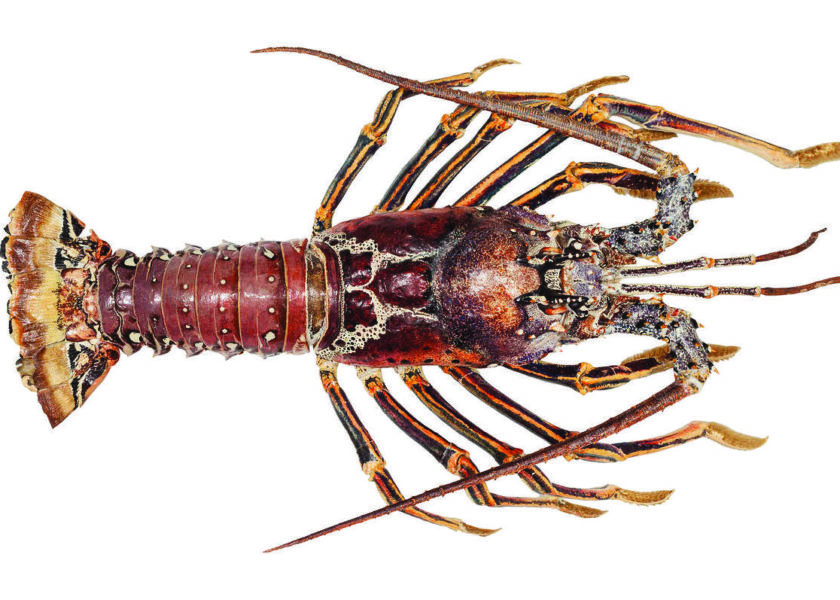 For the Love of Lobsters

For most Bermudians, the anticipation of fall is synonymous with the start of lobster season. September 1st marks the beginning of this open season, as permit-holding lobster divers and fishermen vie for these local delicacies. The shorter hunting period was put in place as a conservation effort to protect lobster populations from overfishing, extending from the first of September until the end of March. As they say, the best things come in moderation, making this annual interlude a catalyst for any lobster lover’s appetite. Whether you’re getting your lobsters at the grocery store, a roadside stall or your favourite restaurant, this fall’s cuisine is sure to be steeped in an islandwide celebration of the long-awaited return of lobster season.

Peter Backeberg takes a deeper dive into the history of these curious creatures in Bermuda, as well as sharing insight into the intricacies of the local lobstering trade.

The Lure of the Hunt
With our extensive coral reef system providing a rugged wilderness of beauty, wonder and a relative abundance of life, it is this environment, coupled with the rare opportunity to experience the thrill of the hunt, that drives Bermuda’s contingent of recreational lobster divers.

The lobsters that live here are the non-clawed variety known as the Caribbean spiny lobster. The larvae arrive on ocean currents and settle amongst our reefs, scavenging at night and resting during the day. It is where they rest, often deep inside the caves, or “holes,” in the reef that makes catching them an adventure.

Part of that thrill is created by the rules. With SCUBA and spears banned, unlike in other regions, divers must hold their breath, often for minutes at a time, and snag their prey using a wire noose on the end of a flexible pole. It’s clearly a source of pride for locals, particularly as the noose just might be unique to Bermuda. Despite the restrictions, the lobster diving community is robust, driven mostly by a hard-core group of enthusiasts who answer the primordial call of the wilderness.

Conserving Nature’s Bounty
There are two ways to legally catch lobsters in Bermuda, either throw a trap or yourself over the side of a boat. With conservation in mind, both ways are closely regulated.

In 1990, Bermuda made an important decision to ban the use of fish pots in local waters. The ban was to protect fish stocks, but it had the knock-on effect of reshaping (or creating) the lobster fishery.

Lobster for a Living
Given the conservation restrictions, the commercial lobster fishery does not make up a significant portion of the total Bermuda fishery but does represent a welcome, and hard-earned, winter income for those with a licence.

Interestingly, lobsters have not always been a sought-after catch, with fisherman John Barnes pointing out in a 2015 article for The Bermudian that back in the ’50s and early ’60s lobsters were largely regarded as fish bait.

A tourism-driven appetite for local seafood has changed that and today local lobster has attained close to delicacy status, with prices in restaurants often in the range of $75 per half shell. “Tourists do see that as part of the Bermuda experience and seek it out,” says Chris Garland, general manager for Harbourside Holdings Ltd. “That said, because of its season, it is a shoulder month product so local demand drives sales over the winter months.”

Catch It for Yourself
For those who don’t want to pay restaurant prices, live lobsters can be found at roadside stalls, or there is the do-it-yourself option. A recreational lobster licence costs $130 and limits the holder to two lobsters (spiny or Guinea chick) per day. The recreational fishing season is the same as the commercial season.

The DENR’s 2018–2019 report indicates an intense start to the year, when the water is warmer and usually calmer, with approximately 38 percent of the reported catch taken in September. Activity dwindles in the winter months, driven by a smaller group of die-hard enthusiasts.

Joshua Crockwell, the winner of the annual Makin Waves Lobster Tournament in 2018, says, “You are basically snorkeling around the reef, diving down looking for holes, which are sometimes big enough to get your whole body in.

“They can sense you coming so you have to stay calm and slide the noose around its tail. The big males can be pretty vicious.”

He says he has the scars to prove it.

Catch Them to Eat Them
Despite the fun and excitement of catching the lobster, eating the tasty meat from the tail is still the ultimate reward and there are many ways to do so.

Directions
In a large skillet over medium heat, heat 1 tbsp butter and 1 tbsp olive oil. Add the lobster meat, 2 cloves of minced garlic, paprika, salt and a pinch of chilli flakes. Cook 3–4 minutes, removing lobster from the skillet once it’s cooked through.

To the same skillet, add chopped bacon and cook over medium heat for about 4–5 minutes. Remove when crispy. Add 2 tbsp olive oil, cherry tomatoes, 2 cloves of garlic, salt, pepper and red pepper flakes to taste. Cook for about 4–5 minutes, until tomatoes are blistered. Add 2 more tbsp butter and cook for another 2–3 minutes. Add white wine and lemon juice, simmer 2–3 minutes, then remove from heat and add lobster back into the skillet.

While this is cooking, bring a large pot of water to a boil. Cook capellini pasta according to box directions. Drain and add back to the same pot, mixing everything together and garnishing with basil or parsley, chives and parmesan cheese. Add salt and pepper to taste. Serve and enjoy!