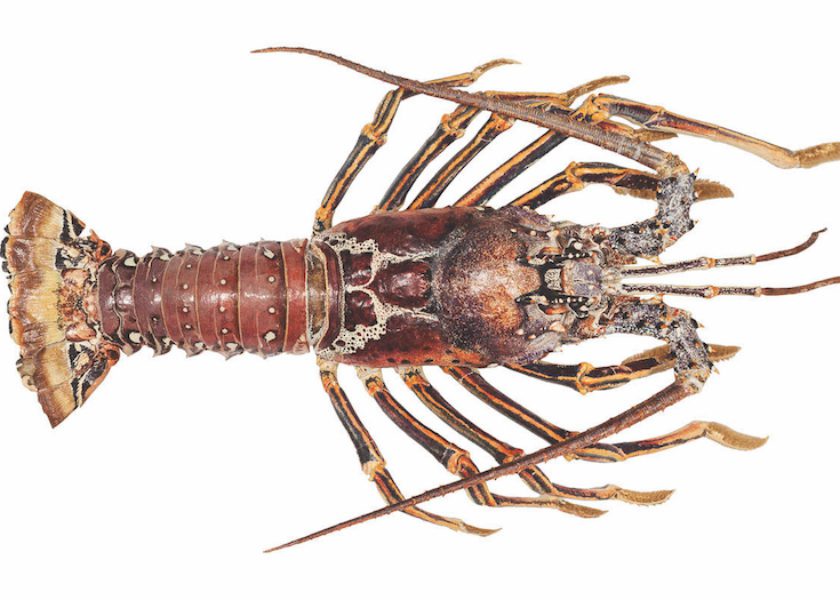 For the Love of Lobsters

How can a creature that abounds in the seas to our south, and even more so in Australasia and Southern Africa, somehow feel unique to Bermuda?

How can the same creature, that is not even born here, become a highly prized local delicacy?

This is the singularly unusual status of Bermuda’s spiny lobsters, an immigrant species that has become a local icon, providing income, adventure and culinary delight upon our shores.

They Come across the Ocean
There are two types of spiny lobster in Bermuda, the Caribbean spiny lobster (Panulirus argus) and the smaller spotted spiny lobster, or Guinea chick (Panulirus guttatus). The spiny is wide spread, found from Brazil, through the Caribbean and along the US east coast to North Carolina. The Guinea chick inhabits only the western Atlantic and its range does not extend as far south. For both, Bermuda represents their northern-most territory.

Each summer, throughout this vast range, literally billions of lobster eggs (each female carries about a million eggs) are released from under their mothers’ tails, floating up into the ocean currents and beginning a nine month, or longer, journey that ends either in some other creature’s belly or on the rocks and coral reefs along regional coastlines.

This means that most, if not all, the lobsters on Bermuda’s reef arrived from somewhere else and most, if not all, the eggs released locally go north, most likely ending up as fish food although some may get recirculated in the North Atlantic gyre. So, effectively, Bermuda represents the end of the migratory line for spiny lobsters.
It is possible that the larvae come in on the sargassum seaweed, but whether that is because they live in the seaweed or are simply carried by the same currents is not clear to scientists.

Conserving Nature’s Bounty
There are two ways to legally catch lobsters in Bermuda, either throw a trap or yourself over the side of a boat. With conservation in mind, both ways are closely regulated.

In 1990, Bermuda made an important decision to ban the use of fish pots in local waters. The ban was to protect fish stocks but it had the knock-on effect of reshaping (or creating) the lobster fishery.

Until the ban, both spinys and Guinea chicks were caught in the fish pots. Subsequent to the ban, the government conducted extensive research resulting in a new type of pot that limited bycatch, and restrictions on the total number of lobster pots allowed to be fished. There are also limits on when and where these pots can be set, with a prohibition during breeding season (April through August) and a limit on the number of pots set inshore from September to December.

“When the commercial fishery for lobsters reopened in 1996, it was decided that the maximum number of traps allowed should be approximately 300,” says a Department of Environment and Natural Resources (DENR) spokesperson. “Although initially there were 20 fishers with 15 traps each, the number of fishers peaked at 31, with 11 traps each allowed.”

Last season there were 26 active licensed lobster fisherman with 12 pots each. While there appears to be a general downward trend in the number of lobsters hauled each year, fluctuations are as likely to be influenced by conditions and fishing practices to our south as anything done locally.

“The local lobster population apparently received a large influx of recruits in the late 2000s, leading to record catches, particularly offshore, between 2009–10 and 2012–13,” explains the DENR spokesperson. “Conversely, regular hurricanes and a dearth of sargassum from 2014 to 2016 may have impacted either larval supply or juvenile survival, and are likely a contributing factor to the poor catches in recent years.”

Bermuda’s spiny lobster fishery is the “most closely managed in the region” with data collected by the commercial and recreational licensees a crucial part of conservation efforts.

“The catch statistics submitted by commercial fishers and recreational lobster divers form the basis of our analysis of the fishery, allowing us to track trends. Metrics such as Catch Per Unit Effort or CPUE—the number of lobsters caught per trap set—can be used to gauge the health of the stock.” 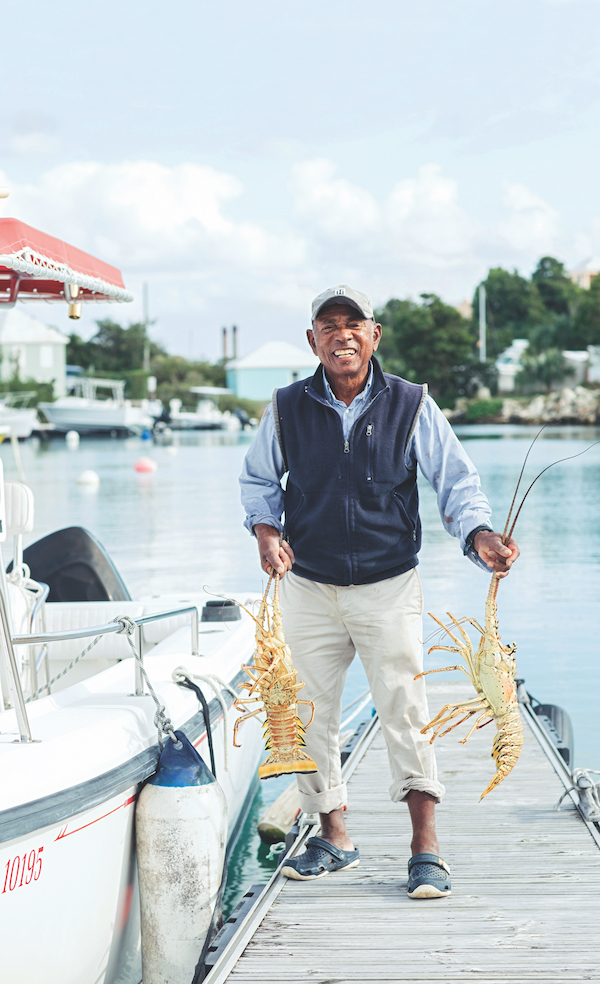 Lobster for a Living
Given the conservation restrictions, the commercial lobster fishery does not make up a significant portion of the total Bermuda fishery but does represent a welcome, and hard-earned, winter income for those with a licence.

Interestingly, lobsters have not always been a sought-after catch, with fisherman John Barnes pointing out in a 2015 article for The Bermudian that back in the ’50s and early ’60s lobsters were largely regarded as fish bait.

A tourism-driven appetite for local seafood has changed that and today local lobster has attained close to delicacy status, with prices in restaurants often in the range of $75 per half shell.

“Tourists do see that as part of the Bermuda experience and seek it out,” says Chris Garland, general manager for Harbourside Holdings Ltd. “That said, because of its season, it is a shoulder month product so local demand drives sales over the winter months.”

The local lobster supply is supplemented with imported frozen spiny lobster tails, which is, as we know, the exact same creature. But while the imported product has a more stable supply and price, fresh local lobster is still regarded by many as a treat worthy of the price. 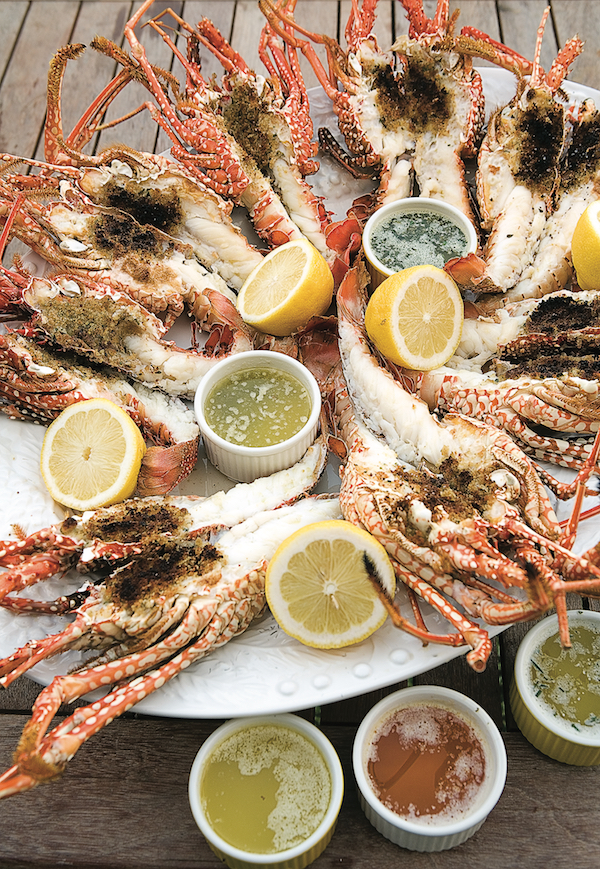 Catch It for Yourself
For those who don’t want to pay restaurant prices, live lobsters can be found at roadside stalls, or there is the do-it-yourself option. A recreational lobster licence costs $130 and limits the holder to two lobsters (spiny or Guinea chick) per day. The recreational fishing season is the same as the commercial season.

Until 2017–18 there was no cap on the number of recreational diver licences. However, according to the DENR, declines in landings over the preceding seasons prompted a cap of 500 for 2017–18. This reflected the average number of licences issued annually over the previous 10 to 15 seasons. The cap is still in place although, at the time of writing, the number for 2019–20 has yet to be set.

The DENR’s 2018–19 report showed that 262 divers reported catching 1,801 lobsters. The average catch for those divers who submitted their reports was 8.5, with 66 being the maximum reported by one diver.

The report also indicates an intense start to the year, when the water is warmer and usually calmer, with approximately 38 percent of the reported catch taken in September. Activity dwindles in the winter months, driven by a smaller group of diehard enthusiasts.

There are also rules to catching lobsters by hand. Unlike other regions, scuba gear and spear guns cannot be used in Bermuda. Instead divers hold their breath and snare the lobsters with a wire noose on the end of a flexible pole. This method just might be unique to Bermuda and is certainly a source of pride for local divers.

Joshua Crockwell, the winner of last year’s annual Makin Waves Lobster Tournament, says, “You are basically snorkeling around the reef, diving down looking for holes, which are sometimes big enough to get your whole body in.

“They can sense you coming so you have to stay calm and slide the noose around its tail. The big males can be pretty vicious.”

He says he has the scars to prove it.

Catch Them to Eat Them
Despite the fun and excitement of catching the lobster, eating the tasty meat from the tail is still the ultimate reward and there are many ways to do so.

For instance, Stuart Joblin, co-founder of Makin Waves and long-time lobster enthusiast, says recently he’s been making lobster tacos on the barbecue. “You put the meat on the grill in a foil pack with lemon, garlic and butter for six to eight minutes. Then you take the meat out, sear it and use it for taco filling.”

For a more traditional approach, Ian Linnell, owner of Jump Dem Bones, an inshore fly and light tackle charter company, and Get ‘er Done, a mobile barbecue catering service, says the key is properly preparing the meat, ensuring it is soft and moist. Ian starts by placing the live lobster in a brown paper bag in the freezer for 30 to 60 minutes. This “calms them down and relaxes the muscles.”

“Putting them straight into boiling water they will tense up and and that can make the meat tougher,” he says.

Ian then splits them down the middle, gets all the “innards” out of the body cavity and saturates them in lemon and water. From there he prefers the grill but says they can also be baked in the oven, turning on the broiler near the end just to colour the meat. On the grill he’ll flip them at the end to achieve the same result.

Guinea chicks, which he describes as the “creme-de-la-crème,” he splits and cleans the same way but then cooks them in a frying pan, shell side down, in lemon and water. “They are not completely submerged and the meat will go white,” he says. “It’s nothing more than a big shrimp, the meat is sweeter than a lobster.”

The final piece to lobster in the half shell is stuffing the body cavity, which Ben Jewett, head chef and owner at Mad Hatters, says allows you to “go wherever your imagination takes you.”

Chef Ben’s prep style is similar to Ian’s but he will dip the freshly cut lobster into seasoned boiling water for one minute, two at the most, before placing it into the oven. “The meat puffs out and goes a brilliant white, its gorgeous,” he says. From there he says the lobster can be seasoned in many ways, Caribbean, Creole, curry—Thai or Indian, and combined with the stuffing.

Suggestions he makes for stuffing include: crabmeat with flavoured rice, breading with fish stock or Creole style with the “trinity” (chopped celery, onions and green peppers), bread stuffing, tomatoes and cajun spices. “It’s very versatile meat and goes with so many flavours, while still keeping its own flavour,” he says.

Of course, there is also the famous lobster thermador, for which Chef Ben says the meat is removed, chopped up and sauted with onions, mushrooms and garlic, flamed with brandy and then combined with a heavy cream sauce and put back into the shell to be baked.

While he rarely offers fresh lobster on the menu at Mad Hatters, he will prepare it for customers if they bring their own lobster in. For this, his “go-to” style is stuffing the lobster with his own Jumbo Lump Blue Crab Cakes and serving with drawn, melted butter.

“Everyone seems to really enjoy that combination,” he says.

He also says he has no particular favourite way to enjoy lobster: “It’s like having five children, you love them all the same.”