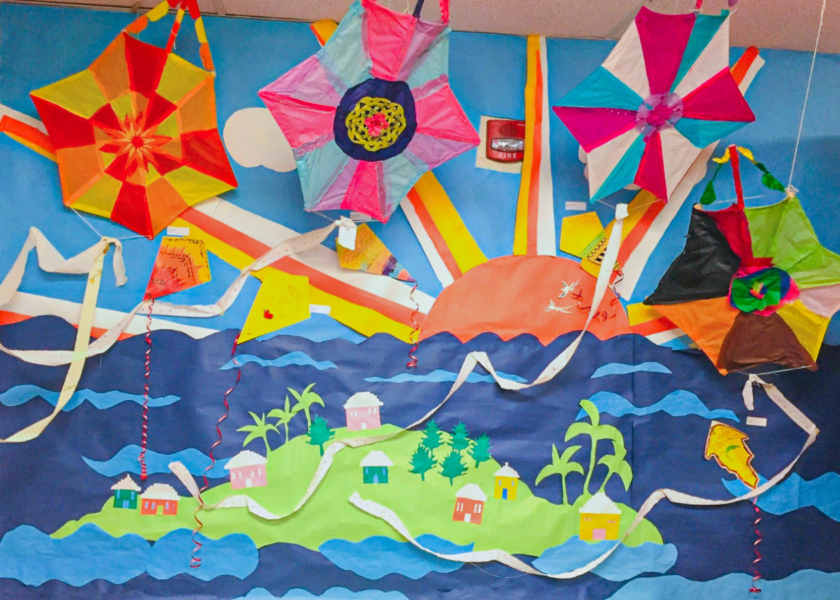 He Began with Blue

A story of the innate power, beauty and valuable potential in the essential tradition of Bermudian Good Friday kite building.

I reached for a piece of the tissue paper and held it up to the light that filtered through the window. It was the most beautiful shade of azure blue. I heard young voices echoing in the hall. I looked at all the sheets of tissue in front of me. They lay in shallow boxes on the counter that ran along the length of the back wall of the art room. Each piece was delicate and translucent, and together their myriad colors made a rainbow down the line. The voices in the hall became clearer and louder, and I turned to greet the children as they burst into the room. I motioned for them to join me seated, cross-legged, on a carpeted portion of the floor. Together, we began.

As a Bermudian and guest Artist in Residence of a public, primary school in Lancaster, Pennsylvania, I had been asked to share the Bermuda kite building experience with seventy-eight, sixth-grade students. I introduced aspects of my island home, and told the story of the kite’s origin and evolution of its place in my culture. We meticulously planned as we built the kites. We investigated color theory and simple elements of design. I invited the students to use this creative and artistic language within this vehicle of flight to express something of themselves and their own world.

I told how our kites rise with the spring winds in a backdrop of blue on Good Friday; a symbol of Christ’s ascension into the heavens, celebrated during the Christian event of Easter. I described how the kites hum and moan, and dip and swing, and find their place in the sky; how wafting scents from codfish cakes, “hot-crossed” buns and “hop ‘n’ john” trace up to the end of the line, as the kites look down and wave to the crowds, seeing us all as one. I told how we come together to share and laugh, and talk and commiserate. I described how our kites, their colors lit by the sun, fly on separate strings, yet trace in the sky, one rich and uplifting scene. I stated that art has the capacity to transcend boundaries and inspire communication. I explained how art can foster curiosity and lead to appreciation and understanding, creating moments of nourishing connection and sustainable community. I proffered the idea that the Bermuda kite is an art form which holds this potential and embodies these ideals.

I reassured the children that they each have the innate capacity to explore their natural curiosity, and to respond to new challenges using their imaginations. I promised that if they were willing to fully engage in all I had to share, that this kite building exercise would allow them to practice their creativity and self-discipline to discover satisfying solutions to difficult steps.  I imparted that while working toward a common goal they would feel a sense of purpose and belonging. I was new to sharing my heritage within this kite building experience, and I was not accustomed to teaching in a primary school setting, but I led with the belief that the potential within every child is as infinite as the sky.

With time came trust, and these twelve year olds learned where to crease and cut, and paste and trim. They strained with fledging patience as we overlapped, wrapped and secured one piece of tissue to another within the parameters of the wood frames, and along the taut string. At times, there was tension and frustration and we often felt tied up in knots. Humor helped when tempers flared and camaraderie renewed resolve. Their efforts to communicate using color and design within sticks and string was initially clumsy, but their curiosity and the project’s intrigue kept them connected and they pressed on. We had such lofty goals.

One little boy arrived to each class with his hands shoved impossibly deep into his pockets. He did not smile. He wore his puffy, down-filled, winter coat zipped to his chin for the first three weeks of kite classes, in a classroom hot enough for tee-shirts. The cumbersome jacket sleeves got bound up in the kite string and caught the dripping glue, and his fingertips could barely be seen beyond each sticky cuff. His hood fell down over his eyes and shrouded his features. He was silent and cocooned. And then, one day, he was not.

He pushed his hood off his head and reached for a slip of the blue. He lifted his chin and  looked me in the eyes. His irises were flecked in deep browns, almost as dark as his pupils, and the light smoothed across his forehead, rounded his cheeks and highlighted his nose. He was frowning, but in concentration, and any shadows fell behind. We were the same height. I was fifty and he was twelve. I did not know this boy, but I did remember being twelve once, and feeling intrigued and wanting to make something new. He told me his plan for the colors of his panels, and that he liked how, when held to the light, the cobalt blue tissue made an emerald green line when overlapping the primary yellow.

He began to share the story of his kite with me: “The blue is the sky, the yellow, the sun and where they meet is green grass. I’m not sure why yet, but I plan to use this bright pink and orange.”

And then he said, “I think I better take off my coat,” and he shed it, and all else fell away including the hubbub of the other kids’ antics and work, chatter and hum. He and I worked in tandem, huddled together over his kite, until I straightened, stepped back, and let go. I left him, fully immersed.

With only five minutes left in the class period I did not have the chance to work one on one with many other students that day. I was responsible for teaching three separate classes with over twenty-five students in each group. Each class met once a week for an hour each session and we had eight weeks to complete the kites. The children were doing well, each at their own pace and ability. There were varying levels of commitment depending on the day, and I would spend the week between each set of classes challenging myself to find fresh perspectives and myriad ports of entry should a student lose their way. Liz, the art teacher, who invited me to introduce the Bermuda kite to these children, expertly perused the room, corralled any students who wandered off task, and lent a hand where needed.

I had asked these diverse, young minds to swim in a tide that was unknown to them, and within this uncertainty and challenging depth something that did not exist before was evolving. Some children leapt in and splashed around; some eased in to the waist then suddenly submerged with intent; some dipped a toe and shook their heads, “No!”, but all gave their avid attention. The kites had them curious. Our work kept them challenged. We made good, steady progress.

I fell in love with each student and with the rhythms of the class. We formed bonds of mutual trust and respect. Individual efforts symbiotically pooled. In this swirl, intellectual and emotional nutrients of all shades were absorbed. Self-esteem seemed to take hold just as the glue dried, and we began to realize that as each panel was secured in place, so was validation of worth. We were not expecting perfection, but aimed to fill the gaps in patterns that would best catch the light. We hope to fly the kites once these northeastern temperatures warm and the earth reawakens from winter slumber. I taught the steps of how to build a Bermuda kite. We completed seventy-eight. Every one is a unique expression and a valid, personal statement of extended effort. They are beautiful. As a collection they have transformed a long, white, institutional hallway into a vibrant new world. The entire elementary population walks, necks craned, eyes bright, and smiles wide through a sky-scape of wonder. The walls have been covered in blue, and fluttering, twisting white tails float behind these splendid jewels overhead.

As I hung the last kite in preparation for the school art exhibition, I heard faint strains of my childhood filtering down through the ceiling from the music rehearsal room above. The musical refrain from Disney’s “Mary Poppins”, sung in young voices, drifted to me as sweetly as a spring sea breeze carrying the scent of freesias:

Up to the highest height,

Let’s go fly a kite and get it soaring!”

I half expected to hear the honesty of the ” Zzzzzzzzzzhhhummm ” that would call me to look overhead. Hearing this sound is to know my horizon is set, the ocean’s in view, my family is with me and the sun is warm on my skin.

I prepared well and had plans and hopes for each session I spent with the children, but I learned not to hold on too firmly to preconceived ideas. Instead, I felt for the tug as the students gained loft and I trusted the feel along the line. I sensed when to give some slack and when to let them run with an idea. If they dipped with frustration, I drew them in, as well as I could, to help them gain momentum. Within this release and pull, relaxation and draw I literally saw them rise to the occasion. Their colors were brilliant in this light; their sensibilities balanced. I can only imagine the sight when we pitch these kites in late spring. What we have accomplished so far has been most satisfying. To have their kites soar aloft is my dream.

The children were instructed to clean up their work-spaces and surroundings at the conclusion of each class. I noticed the more progress they made on their kites, the more avidly they complied and co-operated. This growth had roots in blooming respect for the project, for themselves and each other. On this day, they tumbled and nudged, and laughed and murmured between themselves, and lined up along one side of the room. They waited for the bell, already looking forward to what lay ahead in their day.

He slipped out of line and came up to me.

“Thank you. I love this class and my kite,” he said.

I held his gaze and strung his words like pearls.

“You’re welcome, and thank you,” I replied, and I shook his hand firmly, cupping it between my two.

He squeezed my hand, zipped up his coat, fell back in line and filed out of the room with the others.

Each slip of tissue was fragile,

The child began with blue.