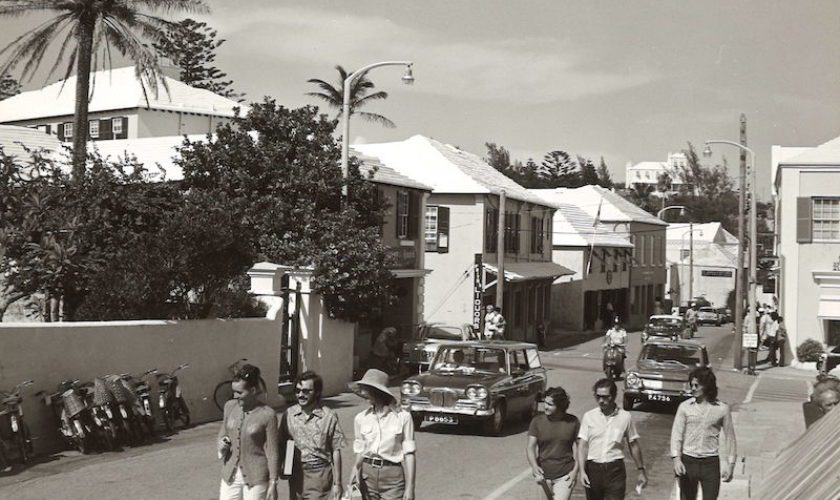 Historical Echoes of the “Old Town”

The article Historical Echoes of the “Old Town” by Ronald John Williams first appeared in the August 1931 issue of The Bermudian. It has been reproduced digitally exactly as it was printed.

Before the Causeway was built that connects St. George’s Island with the mainland, intercourse between the two territories was made occasionally possible by a haphazard ferry service. In sheer perversity and general waywardness it surpassed even the existing ferry transportation between Hamilton and Somerset, although this may be hard to credit for those panting souls who, after straining lungs and tissues to reach Watford Bridge, arrive there only to see the boat blithely steaming past them to the next landing at Cavello Bay. Sometimes weather conditions explain its flippant behaviour, but there are also occasions when light is denied them completely.

However, in the early days of the colony the ferry was vitally important as the only means of communication between the two largest islands, and in 1623 an Act was passed that insisted that the boats be kept running on regular schedule and in sea-worthy condition. The ferry service was to be maintained each day from sunrise to sunset, that is, with the exception of the Sabbath. No fares were to be collected from passengers, and to discourage hack boatmen the Act threatened them with a public flogging if they dared extort money or its equivalent from patrons.

The service was open to everyone, even to young boys and slaves provided they produced a pass written by their masters.

Such was the poverty of the proprietary colony that in spite of the Act there were times when the boats would lie idle at their moorings because the Government employees hired to operate them had received no salary for two consecutive years!

Moreover, the crossing between St. George’s and the main island was not without its perils, and more than once a boat was swept out of its course by gales to be smashed on the reefs or lost in the heavy seas. For more than a century the Grand Jury, whose business it was to investigate and improve living conditions in the colony, presented repeated “grievances” that implored some definite action in the matter of transportation between the islands. It is a hoary tradition to which we seem to be somewhat devoted, and no matter how irksome the company might be, the transportation problem as a conversational topic is still easily the most fertile and reliable.

In the seventeenth century arguments for a dependable ferry service were even more convincing than they are today, for the people of St. George’s looked to the main island for the bulk of their fresh vegetables. The female slaves would carry supplies on huge wooden trays balanced on their heads. With these they would cross the ferry and tramp the two and a half miles into the old town.

About this time it was the annoying custom of hog owners to permit their unaesthetic pets to roam at will throughout the parish. The pigs would feed on the handiest plantation, and thus save their owner the cost of their sustenance. Governor Forster was urged to issue a proclamation to stop this trend to socialism, and he commanded the hog owners to keep the animals in styes and to feed them out of their own provisions; offenders against the new law were subjected to a heavy fine.

In 1624, an odd case was laid before the coroner’s jury in St. George’s when a certain unregenerate toper swallowed a tot or two too much, and died of acute alcoholism. After weighing the evidence carefully the jury found the man guilty of his own murder and promptly devised a punishment fitting to such a crime.

Governor Butler, by popular repute something of an insensate ruffian, ordered the body of the deceased to be buried in the public highway with a stake driven through its chest. The unsavoury job was assigned to the dead man’s fellow revellers who as they worked were compelled to wear notices on their backs which read: These are the companions of him who killed himself with drinking. Not content with this gruesome warning to potential drunkards Butler waited until the body was interred and then had one of the conscriptive gave-diggers lashed to a cannon, because the man happened to be a soldier. The cannon was then discharged with a full blast of powder. The other, a civilian, was flogged at the public whipping post.

The houses of the early settlers in St. George’s were built principally of wood, thatched with palmetto leaves, and it is surprising that there are so few allusions to fires in the written history of the young colony. St. George’s established a fire brigade in 1865 for the first time, when the old town was a Mecca for blockade runners and adventurers from the Civil War.

In 1675, the Bermuda Company issued an order that no houses should be built thereafter without tiled or shingled roofs, and until 1816 this official precaution seems to have sufficed the islanders. In that year a Bill was passed that forbade the construction of any wooden buildings within the prescribed limits of Hamilton and St. George’s.

Among the old buildings at the east end of the Island there is the ancient Church of St. Peter’s, in whose grounds lie the bones of five of the Colony’s Governors, and within whose walls there are tablets bearing inscriptions as fascinating for their unique phrasing and unconscious humour as for their great age.

Burch Castle, standing close by Market Square, was built in 1683, the year in which William Penn founded the city of Philadelphia; and in Cumberland Land are the remains of Nea Tucker’s home, Nea being the lovely creature to whom the Irish romantic, Tom Moore, wrote several extravagant but pleasing stanzas.

In the division of land that occurred in 1618, the parish of St. George’s was reserved for the use of the governor, his ministers and the military garrison.

In 1799, nine soldiers, including two of the guardsmen on duty at the time, stole a small boat and set sail for the coast of America. When the deserters were missed a sloop was dispatched in chase. The fugitives were discovered in a half-starved condition, for they had given scant thought to adequate provisioning for the voyage.

They were brought back for trial, and the two guardsmen were sentenced to death, while the others were to receive a thousand lashes each, a flogging severe enough to kill any but a superman.

At dawn, before an assemblage consisting of the entire garrison, the two deserting sentries were shot. The soldiers were then ordered to march slowly about the bodies, a somber ceremony designed to impress them with the terrible consequences of that worst of military crimes, desertion. After part of the floggings had been executed upon the other seven, the Governor relented and pardoned them while they still lived.

Some interesting old ruins are the remains of St. Catherine’s Fort, the picturesque old edifice whose foundations were laid in 1612, by that most active and competent of the proprietary Governors, Richard Moore.