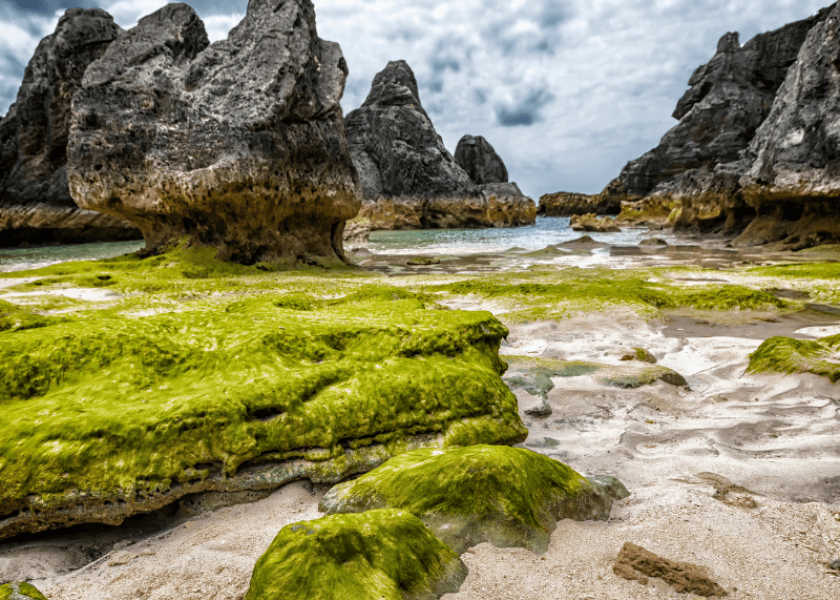 How to Explore the South Shore Like a Naturalist

The South Shore beaches aren’t just good for sunbathing and swimming! They are Bermuda’s most exposed shore – beyond the boiler reefs, there is only the open Sargasso Sea! This proximity to the open ocean is what allows humpback whales to be seen from South Shore with the naked eye in March and April. It’s also the thing that allows various interesting open ocean inhabitants to wash ashore with the tide.

The sandy coast is also an ecosystem in and of itself. Its basis are the sand dunes – as sand is pushed onto beaches from the sea, it dries quickly, and is moved farther up the shore by winds. Higher up the beach, the sand is trapped by plant growth – and this is what can be seen at the back of most Bermuda beaches – in some cases, towering dunes of sand with all manner of salt-tolerant plants growing upon them.

However, most of the action takes place at the strand line! In this guide, we’ll discuss what animals frequent the strand line at South Shore beaches – and how you can discover lots of pelagic animals by having a closer look at washed up sargasso seaweed!

Species at the Strand Line
Crustaceans are the main visitor to the strand line that are easily visible – they feed on the wealth of food that is washed in. One common resident is the mole crab – a shy, bulbous crab, only 3cm long, living below the low tide mark. It rapidly burrows in the sand to hide when disturbed. Another resident of the intertidal zone is the sand dollar, which moves just below the surface of the sand where it forages for food.

At night, ghost crabs may be seen – though they favour undisturbed locations. They exit their small burrows in the sand above the high tide mark to feed on living or dead creatures.

Sargassum washes in and rots at the strand line, and this attracts a great number of small amphipods called beach fleas or sand hoppers – they are very small, and scatter rapidly when sargassum is moved. Insects are also abundant, including devil’s coach horses and seaweed flies. At night, the Bermuda skink is attracted to the high tide line to prey upon these small invertebrates.

The red land crab is also a sandy shore visitor – while it spends most of its time in burrows further up the sand dune landscape, feeding on rootlets, females must make the journey to the seaside when it is time to breed. The larvae are released into the sea to develop during their early life stages, only returning to a terrestrial lifestyle when older.

Finally, two kinds of seabird are common at the strand line – ruddy turnstones, and sanderlings. Ruddy turnstones are the short-billed, calico-coloured birds that many Bermudians refer to as ‘sandpipers’, while sanderlings are a lighter bird, usually light grey, even lavender-ish, with a longer beak. Both of these birds flip seaweed at the shoreline to look for small animals to feed upon.

It must be said that many of these animals are quite a rare sight. Raking of commercial beaches means that sargassum is displaced, and the crabs that go along with it are disturbed. The best place to see many of these animals would be at beaches that are more difficult to access and less disturbed by human activity. 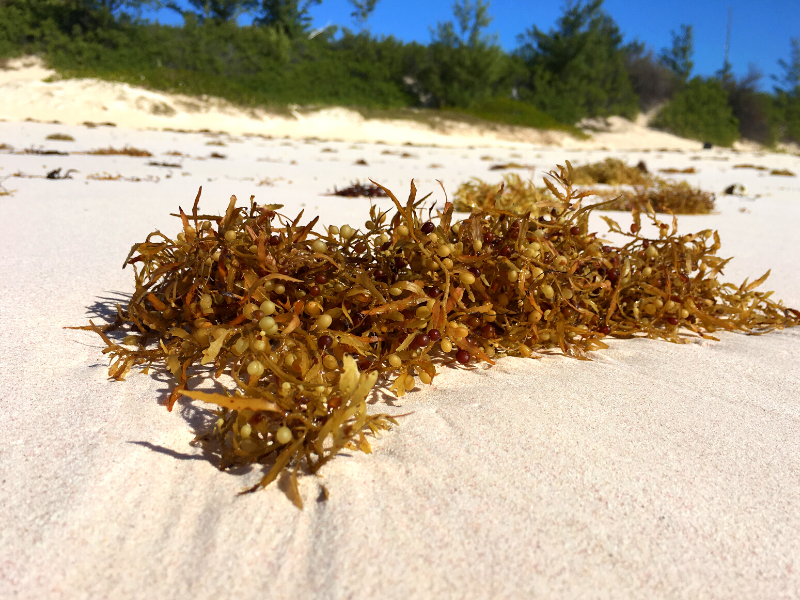 A Closer Look at Sargassum
To take a closer look at sargassum, all you need to do is find a spot where it is washing in fresh! I’ve been able to see a variety of incredible sargassum residents at Horseshoe, Warwick Long Bay, Cooper’s Island and Tobacco Bay! It’s very important that the sargassum is washing in before your very eyes, because the creatures living upon it will perish quickly from lack of air, or be scavenged by shore birds, before you can see any of them otherwise.

It’s important to bring a little glass jar or plastic bucket to look at your finds more closely. Fill your container with seawater so that you can put the critters you find into it in order to have a closer look.

It may be advisable to wear a pair of gloves while looking through sargassum – it can be covered in stinging animals called hydroids, but their sting is quite mild. The bigger risk is that of encountering a Portuguese man o’ war among the sargassum weed – their tentacles can become detached from the animal and produce a nasty sting even hours later.

What is Sargassum Seaweed and Why is it Important?
Sargassum is the golden-coloured algae that washes up on Bermuda’s beaches. It belongs out in the open sea, where it will float at the surface of the ocean using gas-filled bladders. Sargassum supports a huge variety of ocean critters, including some small species that spend their whole lives on the sargassum – such as shrimp, crabs, and nudibranchs; and some that spend their early life stages among the floating mats of weed – such as sailfish, dolphinfish, and turtles.

You may see sargassum that is tan, brown, or black on the beach – as it dries out, it gets darker. When the seaweed is fresh, it is moist, golden, and full of life! If you find yourself on a South Shore beach when sargassum is washing in, you will be able to see the little animals that call it their home when they are stranded. 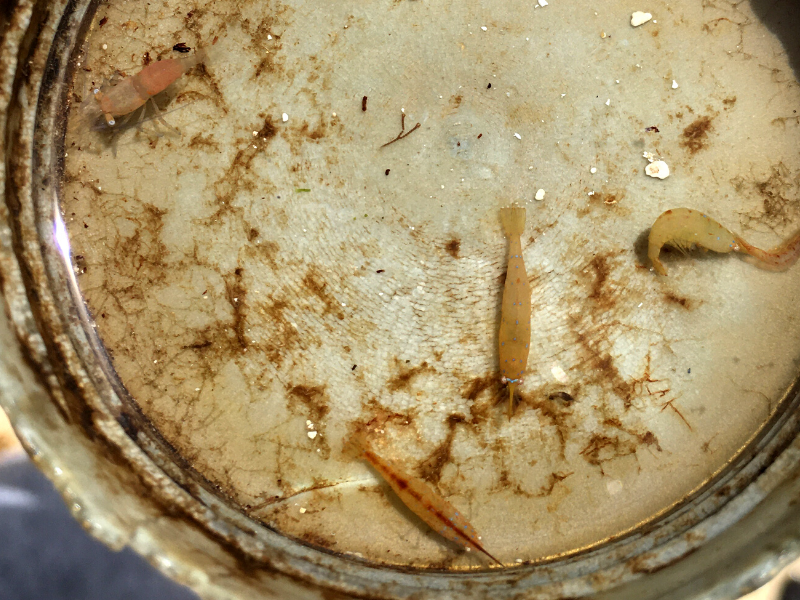 What Animals Can You See on Sargassum?

Shrimp
The most common animals found on sargassum are shrimp. It supports two species of shrimp, the slender sargassum shrimp (Latreutes fucorum) and a more bulbous species (Hippolyte coerulescens). These shrimps can occur in a wide variety of colours – transparent, white, yellow, orange, red and brown. The slender sargassum shrimp can even take on spot or stripe patterns, and can possess small iridescent blue spots on its side.

Look for thin yellow darts, or pink smudges on the sand after you’ve picked up some freshly washed in sargassum – these could be the slender sargassum shrimp and the more bulbous species! Each are unlikely to be larger than your fingertip. You can pick them up very carefully in your hands, or pick them up from underneath by scooping up the sand they are laying upon. Make sure to transfer them to your bucket, or back out to sea, as they will run out of air otherwise. 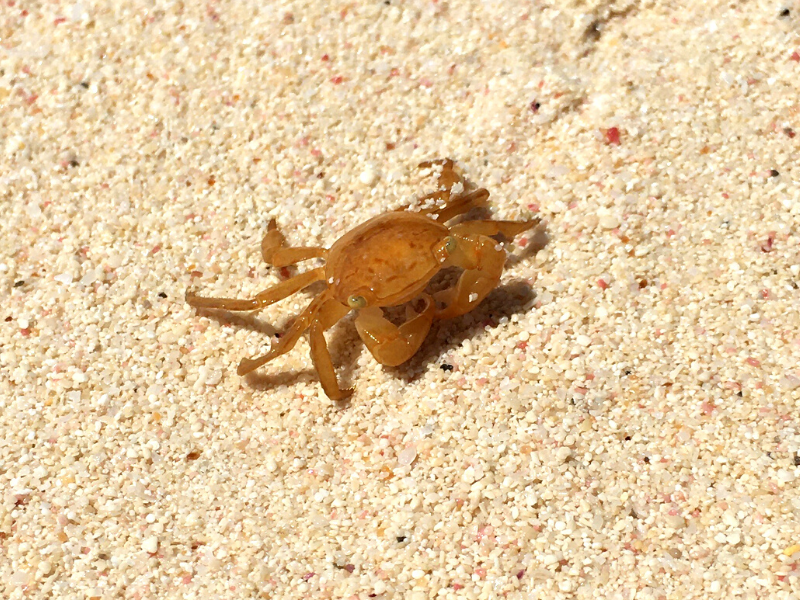 The gulfweed crab is a small, usually yellow crab – but like the slender sargassum shrimp, it can occur in a wide variety of colours – sometimes it has white splotches on its head, mimicking calcareous tubes built by annelid worms that live on sargassum. They can also be speckled or mottled, or be a dark red or brown.

Washing up on a Bermuda beach is likely a sargassum crab’s first experience of solid ground. They usually spend their time clinging to the sargassum stalk with their last pair of legs, feeding opportunistically on krill, isopods, sea skaters, and squid. They are even capable of swimming short distances to make an attack on passing prey, as their legs are broad and act as paddles in the water.

Interestingly, the crab has also been found to live on the carapaces of Loggerhead turtles! There, the crabs tuck themselves in under the turtle’s shell, and feed on barnacle larvae and parasites seeking to attach to the turtle.

On the shore, you may see this crab scuttling by the water, or sitting stationary upon the sand. If you are flipping over sargassum, they may scuttle backwards, trying to stay close to the sargassum that they blend in with. 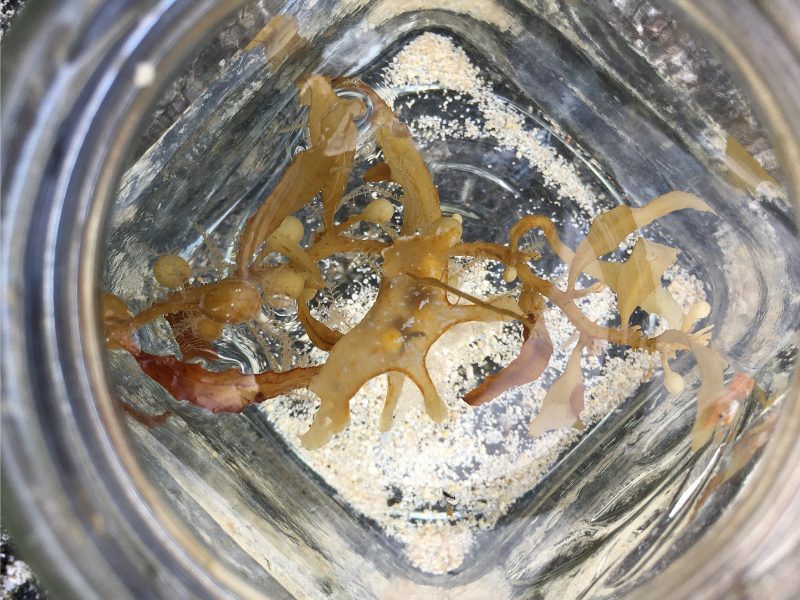 Nudibranchs
Perhaps the most handsome sargassum resident is the sargassum nudibranch! Nudibranchs are marine mollusks – sea slugs. The word ‘nudibranch’ means ‘naked lung’ – since nudibranchs are a kind of marine invertebrate that wear their gills on their backs. The sargassum nudibranch has two pairs of spines on their backs, called cerata, which are lined with gills. They also have two ‘horns’ at the front of their bodies which are chemosensory organs, used to detect odors and changes in the water current.

The edges of the nudibranch’s skin are crenellated, to make it blend in more with sargassum. It also has white speckles, and some iridescent blue spots like the slender sargassum shrimp. It eats hydroids that grow on the sargassum, a kind of small, stinging animal – but the sargassum nudibranch itself does not sting.

They look like globs of mucus on the sand when washed in. They only grow up to 50 mm long. Carefully move the nudibranch to your container of seawater (and perhaps provide it with a sargassum weed perch) and you will see it unfurl into its full glory – with prominent cerata sticking up. They are also capable of swimming short distances by flexing their bodies.

The other nudibranch you might see on sargassum, though it is much less common, is Spurilla neapolitana. These curious creatures have numerous curled cerata on their backs, giving it an overall alien appearance. They also blend in well with the sargassum, and they only grow up to 100 mm. They obtain photosynthetic zooxanthellae algae from the anemones they feed upon, and use the sugars they produce as a second source of food – just as corals do with zooxanthellae, too. 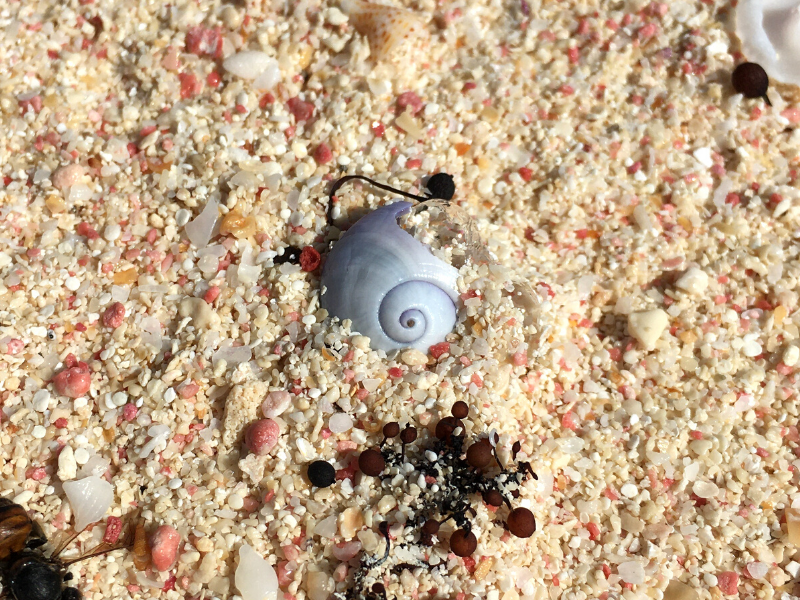 Other Pelagic Animals
Other pelagic animals that aren’t necessarily associated with sargassum, but which are often found among it, include Portuguese man o’ wars, by-the-wind-sailors, and purple sea snails. If you find any of these animals washed ashore in Bermuda, you can bet that they have lived most of their lives far out at sea.

You can see many Portuguese man o’ wars washed up on South Shore beaches – they are easily discerned by their bluish balloon, which is filled with gas to keep them afloat. By the time they wash up, most of their tentacles are gone – but they usually have long, curly, bright blue stinging tentacles that can produce a painful sting.

By-the-wind sailors are in the same family as man o’ wars, and have that same characteristic deep blue colouration. They are much smaller than the man o’ war, and they look like discs with a sail on top. Small tentacles radiate off of the base. They use the ‘sail’ to catch wind currents on the high seas – but being at the mercy of the winds means that they are vulnerable to mass standings on Bermuda’s shores. The last major stranding of by-the-wind-sailors was in March 2018. They are also capable of producing a sting.

Finally, the purple sea snail is a particularly exciting animal to find washed up. Their shells are a brilliant lavender colour, and extremely delicate. The snails spend their whole lives floating right at the surface of the open sea, kept afloat by a raft of mucus bubbles filled with air that they produce. The shell must be very light to enable them to float.

The mollusks have no hard covering that forms a stopper when they fully retract into their shell, like West Indian top-shells have, for example – instead, they have a long head on a very flexible neck, with tentacles on the side for protection. The snail feeds on the Portuguese man o’ war and the by-the-wind-sailor on the open sea. 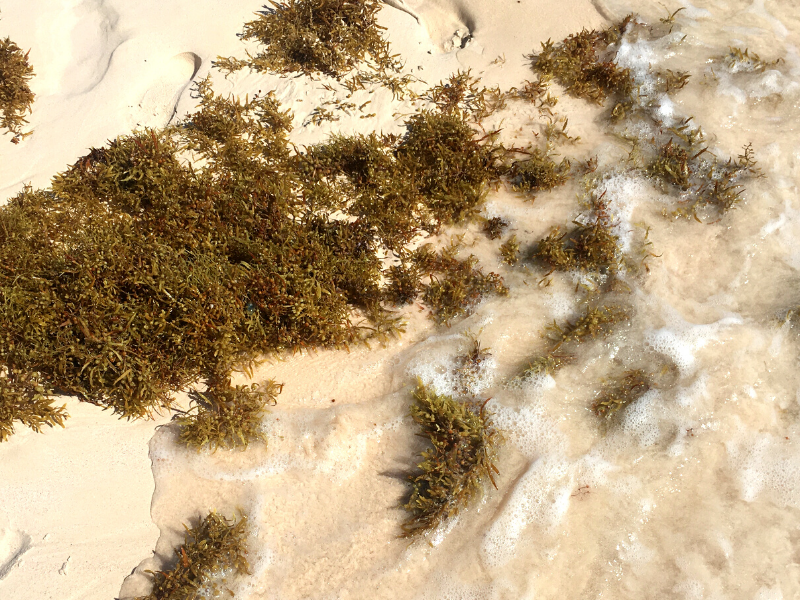 When You’re Done Exploring
When you’ve finished looking at the interesting pelagic animals washed ashore in Bermuda, make sure to return them to the sea if they have been stranded!

Unfortunately, it’s unlikely that sargassum, and the animals caught in it, will make it back out to the deep ocean even if returned to the water – but their standings play an important role in the coastal food chain, as the activities of shore birds, and of the skink prove!