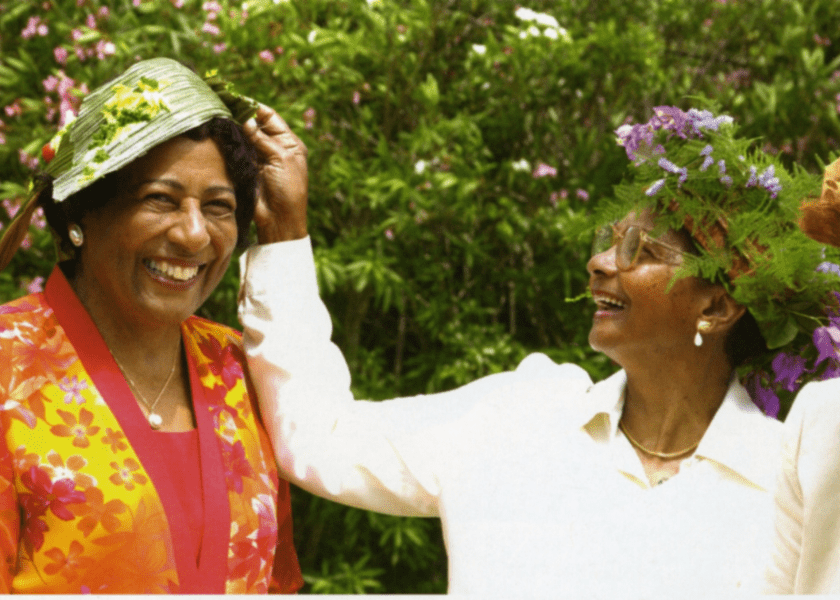 This article is from our archives. It appears here exactly as it did in July 2003.

Best known for the exquisite floral hats at their annual show, the Hibiscus Garden Club has blossomed from its small beginnings over 40 years ago, and achieved international recognition.

On a rainy April afternoon I was privileged to meet three of the four surviving founder members of the Hibiscus Garden Club at the Cedar Hill home of Laura Bean. Hoping to hear some reminiscences of the early days, I spent a delightful few hours with Laura Bean (97), Vera Bascome (87) and Louise Wilson, who will be 100 on January 20, 2004. Unfortunately the inclement weather kept Shirley Wainwright (101) at home. The ladies, in very good spirits, told me about the Club’s infancy and their close involvement in it. Bascome had at one point been Treasurer for 17 years and recalled her trip to Washington D.C. with fellow members to decorate the Cathedral there. Bean attested that her “brain had turned to mush.” (It had done no such thing!) And that she had lived very close to her sister-in-law, the late Ruth Simons the Club’s first President and had done a lot of the original planning with her. Wilson came with a fistful of ribbons and commendations, and mentioned going to see the wrecked Pollockshields off Elbow Beach when she was 10. She had the last word for them all —“I love flowers, PERIOD!” We then sat down to a delicious tea, which seems to be a tradition with the Club.

The Hibiscus Garden Club was formed on September 18th, 1959 at the Cedar Hill Warwick home of Ruth Simons, who wrote in the Minute Book: “A number of Flower and Garden lovers met on the above date at Ruth Simons’ residence to form a Club. A very friendly and enlightening discussion was held. Ming gave us a lot of helpful hints and promised to get us affiliated with an outstanding club in England where we could obtain literature etc. It was decided to meet on the last Wednesday each month at 5 pm.”

Officers elected were Simons, president, Ruth Wainwright, corresponding secretary, and Wilson, secretary and treasurer. She and Julia Lightbourn were authorised to draw up a constitution. Others in attendance were Edna Conyers, Laura Bean, Faith Steede, Edna Scott, Viola Davis and Reginald Ming. After the meeting Simons wrote, they “celebrated the opening of the Club by serving cake and champagne.”

A constitution was drawn up which included their aims and objectives:

The constitution also said affiliations may be made with any outstanding similar groups and that the membership fee would be five shillings a year.

At the early meetings members exchanged hibiscus and other cuttings and discussed flower arranging. The first arrangement recorded was of yellow white and mauve chrysanthemums, roses and cherry leaves. (“We as amateurs were very proud of it.”)

Eugene Harvey, an avid gardener, gave advice on planting and showed them around his garden and they made a number of other field trials hoping to increase their knowledge.

After meeting in members’ houses (mostly in Warwick) for six months, in February 1960 Reginald Ming offered his office at the Tennis Stadium (he was Government youth organiser at the time) as a venue. It was also decided to hold an evening meeting once a quarter, “for the convenience of our male members” and to enter a hat (made and modeled by Eriole Williams) in the St. Mathias Flower Show. The hat won a silver cup and thus began the Club’s tradition of making floral hats for which they are now renowned.

At one meeting in 1961 it was decided that members would bring and recite poems about flowers. It was Julia Lightbourn who brought one titled “IN A GARDEN” by Dorothy R.B. Gurney and this became “The Ode” which has been recited at every meeting since.

A flower bench exhibit was held for the first time when members travelled to St. George’s to meet at Trueletta Trott’s home. Charles Lloyd Tucker judged and a silver cup was awarded. The membership had expanded to include those from both Somerset and St. George’s and in 1962 it was decided to limit the number of members to 35.

In 1962 the September meeting was designated a special anniversary celebration and the Club staged its first exhibition featuring competitive displays of flowers, fruit and vegetables. At subsequent anniversaries a sale of plants and a hat show and high tea were instigated. A church service, usually at a different church every year, and a brunch afterwards also became part of the anniversary events.

Affiliations were formed with The Garden Club of Bermuda and The Council of State Garden Clubs of America and in 1980 members participated with them in decorating the Washington (D.C.) Cathedral. In 1983 they travelled once again, this time carrying Bermuda foliage, to decorate The Cathedral of St. John The Divine in New York City for an International Floral Festival. (Wilson remembers playing hooky on a free day and paying a whirlwind visit to Atlantic City!) Another affiliation has been with N.A.F.A.S— The National Federation of Flower Arranging Societies—and members have taken advantage of their instructive literature and have entered their collage and photographic competitions. Last year Sharon Simons won first prize for her photo “World of Colour” in the London and Overseas Area Photographic Competition staged by N.A.F.A.S. Members also took part in two large and prestigious design symposiums here in Bermuda.

There has always been great emphasis on education and through the years the Club has invited guest speakers and instructor/demonstrators to attend their meetings. William Kuhn, Hubert Johns, Barry Phillips and Edward Manuel of the Dept. of Agriculture were early speakers and instruction has been given by Elizabeth Wingate (banana leaf dolls) Lorna Mercer (Japanese flower arranging) Elizabeth Parker, Molly White and the late Reggie Ming (traditional flower arranging) Diane Doe (orchids) Trent Smith from Aberfeldy (propagation) and Malcolm Griffiths (landscaping). Members are keen exhibitors and competitors in all the horticulture and floriculture sections of the “Ag Show”—now The Bermuda Annual Exhibition—and have been awarded many blue ribbons over the years.

Early on the Club was responsible for planting the Royal Palms on Middle Road, Warwick, just east of Spice Valley School. Today they continue to be involved in the community by decorating the Glove Hotel for the National Trust’s annual Christmas Walkabout in St. George’s and they have traditionally celebrated Conservation Sunday by helping in the decoration of various churches. They created all the floral decorations throughout H.A.&E. Smith’s for their “Garden Week” in 1988, giving an opportunity for Bermudians to see the breadth of their talent.

Over the years the Club’s venues have included the Independent Order of Oddfellows Lodge on Victoria Street and St. Paul’s Christian Education Centre, but now they are “back home” in Warwick at St. Mary’s Church Hall, just down the hill from the late President Ruth Simons’ house where their Exhibition of Flowers, Fruit and Hat Show took place on May 3.

An impressive display of competitive floral arrangements of a high standard, cut flowers at the peak of perfection and an interesting and mouth-watering array of fruits and vegetables was testament to the Club’s 44 years spent studying “floristry in all its aspects, garden and plant culture…”

The Show is open to the public and about 127 ladies sat down to a sumptuous high tea that day, surrounded by displays of nature’s gifts and enjoying the spectacular hats so intricately fashioned entirely from plant material and modeled by members. This was a far cry, perhaps, from the Hibiscus Garden Club’s small beginnings, for the organisation has grown and achieved international recognition and local plaudits. But the aims set out in the Constitution are still adhered to, the ode still recited and fellowship celebrated through the love of flowers.